You are at:Home»Instruction»The ‘Ground-Up’ Approach to Saving Strokes: Part 1

You’ll read the term ‘saving strokes’ all the time in my instructional posts, because I believe the best way for an average player to improve her score is to cut down on taking unnecessary bogeys, doubles, and – shudder – worse. Birdies are wonderful, but for those who consider breaking par consistently to be a lofty goal the quickest way to get there is to identify the avoidable mistakes we repeatedly make- and eliminate them.

There are many ways to do this, and the good news is most don’t require increased athletic talent so much as an understanding of three things: what’s likely to happen given the situation; your current skill level; and a number of environmental factors. This post will focus on a big part of what happens after the disc leaves your hand- specifically the moment when it obeys the law of gravity, as all discs must eventually do. What goes up must come down, and unless your disc lands in a tree or on a roof or somewhere else above the playing surface, it’ll end up hitting the ground.

The question to ask yourself is, when you’re planning the shot you want to throw, how much thought are you giving to what happens after your disc first makes contact with the ground? If your honest answer is ‘none’ or ‘not much’, you’re likely taking some unnecessary strokes during your rounds. And if you’re like me, you might have been giving the subject plenty of consideration for years and still not realizing the important points.

My goal with this lesson is to list a few factors related to the angle or texture of the terrain that may affect your decision making when determining the exact shot you plan to execute. In Part 1 we’ll cover the best ways to deal with holes that slope- uphill, downhill, and side-to-side. Part 2 will address the texture of the terrain – thick grass, dirt and rocks, thick brush, hard-pan. Each presents special considerations, and we’ll cover ’em all. Now, on with the book, er, blog learnin’!

Don’t be a dope—pay attention to the slope!

On courses in many parts of the country, all the holes are completely or pretty much flat. If that describes your neck o’ the woods . . . first of all, I feel for you. Slopes add a whole different element of fun (and sometimes frustration) to disc golf. But assuming you occasionally get to venture to other, more mountainous (or at least hilly) courses, you’ll still want to pay attention. Sometimes the slope of the terrain on a hole goes downhill, sometimes uphill, sometimes left-to-right, and sometimes right-to-left. In each of these cases there is a specific adjustment you can make to your throws that will give you better results than if you had throw the hole as if it was flat.

The first thing to keep in mind when throwing to spots above or below you – especially on downhill shots – is to be sure your flight line is roughly parallel to the line between you and the target. When the teepad is flat but the target is far below, like the famous Top of the World #27 at DeLaveaga in Santa Cruz, CA, players that don’t know better tend to throw on a line parallel to the teepad. The result is a shot that flies high into the air, then fades out way short and wide of the target. When throwing downhill it’s important to make that line of pull-back and release match the slope of the terrain- not the flatness of the teeing or throwing surface. Watch the video examples given by Greg Barsby, Don Smith, Pat Brown and Avery Jenkins in the DeLa link above. In each of them you can easily notice the players angling their throws downward. 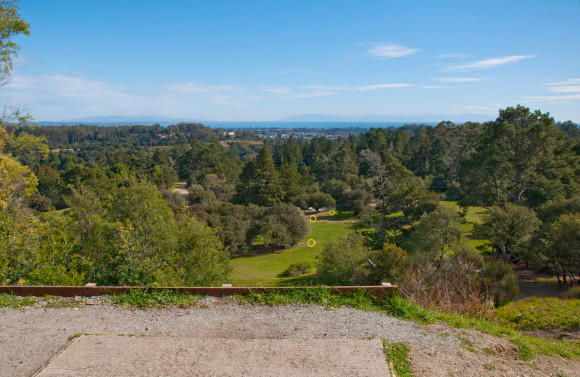 On hole 27 at DeLaveaga, throws that are not aimed downward toward the hole look for a second or two like they’re headed to the Pacific Ocean. Then they fade quickly and severely and get nowhere close to the hole. (Photo by John Hernlund)

Uphill shots require this same principle, but because it’s pretty obvious that if you don’t adjust your angle upward you’ll throw the disc right into the ground, players make that mistake less often and less dramatically. The main thing to focus on when throwing uphill is not letting the disc hyzer too much and keeping it somewhat flat. It’s hard enough getting uphill distance; shots that do the ‘ol float-and-fade will be even more pathetic when the slope causes the disc to drop helplessly down, occasionally right past the player (I’ve seen it happen).

The other thing to keep in mind on uphill or downhill shots: take notice whether the area where you plan to land is a continuation of the slope of the shot, or if it levels off. For uphill shots with an intended landing zone that is also uphill, don’t count on much skip or slide. Conversely, if it’s downhill plan for extra distance after the disc first touches down- especially if the slope continues down well past the basket/landing zone.

Holes with a terrain angle that cuts across the fairway are much trickier to adjust for a couple reasons. First of all, the slope may be partially sideways and partially uphill or downhill. When that is the case you need to consider the information coming next and do your best to combine it with the tips I just shared. But the really tricky part of playing a hole with side-slope is the roll-away potential. And while being the victim of unintended and undesired rolls is sometimes unavoidable, you can increase your odds significantly by understanding a pretty simple principle.

I’m a bit embarrassed to write that it took me a long time to figure this one out. But when I did, it was one of those ‘A-ha!’ moments.

For the longest time, it just seemed logical to always try to land my disc at as close to the same angle as the slope as possible, reasoning that when I did that it would be more likely to slide or skid to a stop rather than stand up on an edge and roll away. And I was partially right, but the key thing I was ignoring was the direction of the spin. I’ll give an example, but as a lefthander and I am going to exercise my right to use the ‘left-hand-backhand’ example rather than the typical R-H-B-H that is usually cited. (You righties will just have to make the adjustment like we lefties normally do  : ) 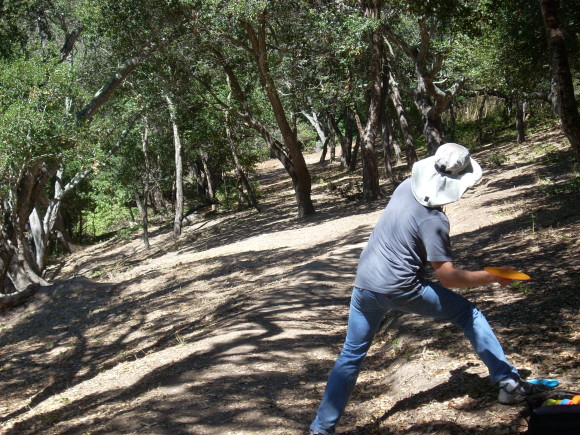 Hole 4 at Pinto Lake in Watsonville, CA is sloped so severely from right-to-left that most players feel compelled to throw forehand upshots so the disc will be cutting into the slope when it hits the ground rather than sliding down the slope. (Photo by Jack Trageser)

So I’m a lefty throwing backhand on a hole with severe right-to-left slope, like Hole #3 at Pinto Lake in Watsonville, CA.  In the past I’d start my upshot above the hole and planning for some slide try to land above the hole, and hope it touched down flat and stopped before too much slide. But this approach has two major problems: First of all landing nice and flat on a slope often results in much more skip and/or slide than you bargain for- especially if the surface is hard and bare (more on that in Part 2). But worse, left-handed backhand throws spin counter-clockwise, and when the slope is right to left that becomes a very fast roller with the slightest inducement. If the disc lands anything less than perfectly flat, or experiences one bump off a root or rock, it’s ‘off to the races!’

After this happened to me a few hundred times, a realization began to illuminate my thick, dark, cavernous skull. If this approach results in disaster so frequently, maybe the opposite would be better. I think I got the idea from guy named Costanza who I played frolf with once.

So I instead threw an exaggerated lefty backhand hyzer that crashed into the ground at an angle practically perpendicular to the slope- the very angle you’d normally associate with rollers. But – and this is the key – the counter-clockwise spin acts like backspin and stops the forward motion of the disc. Also, the momentum of the disc, while going forward, is also going uphill rather than downhill.

Using this technique the disc stops pretty close to where it lands a large majority of the time. It usually flips over upside down immediately like a good disc. Every now and then I catch a bad break and the disc stands up on an edge and there is just enough gravity to start it rolling. But as I said, when slopes are involved nothing can prevent that from happening once in a while.

Part 2, which focuses on the texture of the terrain, is coming soon!