You are at:Home»Instruction»Gap Analysis: The science and art of navigating trees in disc golf

Many playing companions over the years have heard me mutter “I see holes” out loud at some point in my pre-shot routine during a round of disc golf. It’s a ‘go-to’ phrase of mine, and has been for probably 15 years. Some ask why I say those particular words when getting ready for certain shots, and they get the answer(s) you’re about to read below.

The funny thing about this particular mantra is that I use it for two distinctly different reasons- yet the two reasons often blend together. And the place where the two meet – the axis of risk/reward assessment (a scientific approach) and more nebulous subjects like positive thinking and confidence (closer to an art than a science) – is really the essence of the mental side of golf. As always, this is best explained through the use of specific examples, which we’ll get into, but first a brief explanation of the two reasons for “I see holes!”

The history of this mantra for me was the light bulb-over-the-head realization that even on shots where the trees and other obstacles seem so numerous that throwing a disc cleanly through and past them is impossible, it’s rarely as bleak as that. In fact, when you consider the overall area covering a particular flight path you’re hoping to take, the gaps between the trees usually represent a much larger portion of the total space than the obstructions.

After this fact became apparent to me, I would chant “I see holes” as a way to remind myself to think about and visualize a clean flight rather than dreading the relatively few disc whacking trees it had to pass. In this context it’s really just positive thinking and positive imagery, and the mantra is a way to keep my thoughts focused on the good things that I plan to happen rather than the bad things that might occur. And it really works! That’s how it started out when the phrase first popped into my head. But it was only a matter of time before my analytical side dissected the magical effectiveness of ‘I see holes’.

Ironically, as explained above my little mantra started out as a vague positive-thinking mind trick. And I’m convinced it works. But sometimes I find myself with so many trees between my lie and the basket (or whatever fairway spot I’m aiming for) that even a positive thinker along the magnitude of Stuart Smalley would have a hard time ‘seeing holes’. I’m talking about situations where I know that realistically the chances of getting through clean on the ideal line are less than 50 percent. At times like that I’m forced to choose between (to use a technical term) the least suck-y option.

When it’s time to select from different options on the golf course, the scientific side of me kicks in. Thoughts of percentages and risk/reward kick in. You would think that would preclude the nebulous realm of ‘I see holes’, but the mantra actually has a place here as well. This time, though, the more applicable adjectives are ‘practical,’ ‘sensible’, and the more golf-specific ‘high-percentage’. Depending on the situation, there are a couple different applications for this approach.

When your direct path to the target is blocked, look for gaps to the left and right that offer the best alternatives. Sometimes, as in Example 1 (click on the image to get a better view), you can hit the gap with a shot that will curve toward the target after it passes through. Other times the layout won’t allow for anything but a straight shot. Either way, though, it’s better to get most of the way there than aim for a tiny slot and hit something right in front of you. 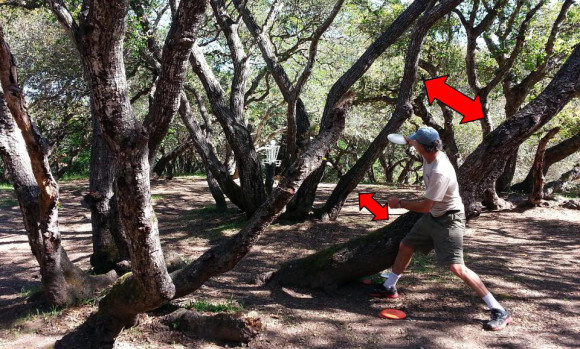 EXAMPLE 1: Sometimes the best gap to aim for does not present a direct route to the target. But in tight spots the thing to look for is the best chance to get past the obstacle. In this case the player needed to throw a shot that curved left after clearing that gap. (Photo: Jack Trageser)

This approach usually applies to instances where the obstacles in question are not right in front of you but further away, and evenly distributed, so that there is no single gap that is the clear choice.

In situations where I see what appears to be a wall of trees blocking my route that is far enough away that aiming for one particular small gap isn’t feasible I try to identify the least-dense section of that wall. Kind of like an attacking army would look for the weak spot that is most vulnerable. To be clear, I’m not talking about finding a single gap between two trees. In the situation I’m describing, the objective is to identify, aim for and hit a general area that offers the least resistance to a disc that wants to pass through relatively unmolested.

In a sense, I’m trying to find the one realistically hittable zone where there are more open spaces than trees (‘I see holes!’). A key point is that in situations like these I have shifted my goal away from selecting the shot that can get me all the way to the target – because there is either no realistic option for doing so or the chances that I’ll succeed are extremely low –  to selecting the shot that has the best chance to advance the disc as far as possible.

Example 2 (again, click on the image to get the necessary larger view) shows two gaps- one on the left of the photo, and one on the right. The gap on the right is the more direct route to the basket (hidden behind the trees on the right), and it is also a ‘true’ gap in the sense that a perfectly accurate throw will definitely get through. However, I chose to aim for the general area circled on the left for the following reasons: 1- even though a couple skinny tree trunks cut through the area, the overall area is much larger than the single gap on the right, and my odds of getting through are better; 2- the gap on the left provides a better worst-case scenario as there are no early trees to hit on the way to the gap (notice the early trees on the right side on the route to the gap on the right); and 3- as a left-hander throwing a backhand shot, if I get through the gap on the left with the throw I want, it will skip-hyzer right, in the direction of the basket. The right gap would require me to throw a shot that stays perfectly straight for 200-plus feet- a difficult feat to say the least.

We’ve covered a lot of ground in this article, hopefully filling a few ‘gaps’ (couldn’t resist) in your strategic and mental game. Here is a quick list of the important take-aways:

You Make the Call

In the last photo – Example 3 – there are three routes circled. If you open the full image you can see that the basket is shown in the middle of the center gap. The question I have for you, the reader, is ‘Which gap would you choose (the right rough on hole 10 at DeLaveaga, by the way), and why’? Please use the Comments at the end of this post to provide your answer. I’ll wait a few days for the answers to come in, then I’ll post a comment with the route that I took, and why. 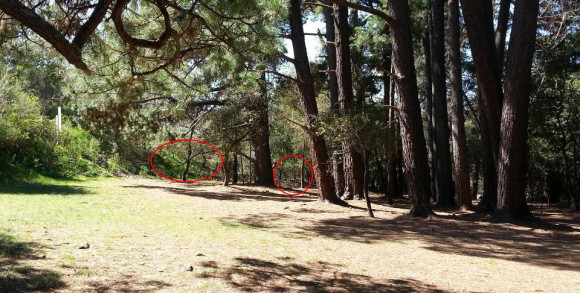 EXAMPLE 2- In this photo the basket is to the right, behind the wall of trees. The gap on the right- despite the fact that several small tree trunks criss-cross the opening – is still the best option for the left-handed thrower. (Photo: Jack Trageser)

EXAMPLE 3- On this one you get to make the call. Would you go for: A-the gap on the left; B- the gap in the middle (note, the basket is in the middle of this gap); or C- the gap on the right? And most importantly, why? Vote in the comments section below. (Photo: Jack Trageser)