You are at:Home»Interviews»Interview with 2010 PDGA World Champion Eric McCabe 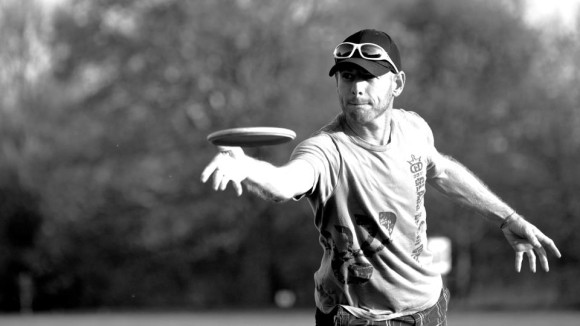 2013 has been a year of change for 2010 PDGA World Champion Eric McCabe. After leaving Team Discraft, McCabe has turned into one of the main faces of Team Dynamic Discs. One could argue that he is the face of Dynamic Discs.

The new team meant an entirely new bag and a chance for a new beginning. While we’ve been highlighting the entire Dynamic Discs lineup all week, we wanted to get in touch with the team’s flagship golfer. McCabe was nice enough to take some time out to talk about the transition, what’s in his bag, and what he thinks of the current PDGA National Tour.

All Things Disc Golf: It’s been nearly six months since you made the announcement you were leaving Discraft to remain with Dynamic Discs. Now that you’ve had a lot of time with the Dynamic Discs/Latitude 64/Westisde products, how has the transition gone?

Eric McCabe: The transition has been a lot easier than I expected at first. I’ve said for years now that Latitude has the best plastic out there! I will admit, at first I was struggling with the midrange game. The Buzzz was a staple in my bag for the past 10 years, so of course there was a little “withdrawal” at first, but with the Suspect and soon to be released Verdict, and Truth, which will be my DD Signature disc, DD will have a solid Midrange lineup!

All Things Disc Golf: You recently did an In the Bag video (shown above). Is your bag similar today similar to what was shown in the video, or are you still making tweaks?

Eric McCabe: Mostly the same, that video was done at the Texas States, since then, Lat/DD have come out with a couple new discs. I’m constantly trying out new plastic from the Lat/DD/Westside lineup. For the first I’d say 3 months, every week I found a new disc I really liked, that could easily find a spot in my bag. I’m planning on shooting a new “in the Bag” with CDSB during the AM Worlds, in Emporia, KS.

All Things Disc Golf: What is your favorite disc from Dynamic Discs? Latitude 64? Westside?

All Things Disc Golf: We just posted our review of the Ranger backpack. Are you loving yours? What’s your favorite part of the Ranger?

Eric McCabe: AWESOME! This is by far, hands down, the BEST bag I’ve ever carried! Comfort is the most important quality in a bag, and the Ranger has it! Tons of storage, light weight, and very affordable! OGIO has partnered with DD to manufacture all three of our bags, which is great! OGIO has already perfected the backpack, so designing and producing our bags is a great partnership for both companies.

All Things Disc Golf: DD and Lat64 have come out with a handful of new discs lately. Have you thrown the Renegade or Suspect much? Stiletto? Fury? Others?

Eric McCabe: The Suspect has become one of my go to Midranges. The Renegade is a great disc for slower arm speed players, I do have one in my bag for long range rollers or Hyzer-flip shots. Haven’t really tried the Fury yet, but he Stiletto is amazing! When Svante and Tomas were in the states for the Glass Blown Open they saw a demand for a fast and overstable driver, due to the powerful winds in KS lol…They succeeded with this disc! DD has a couple new discs coming out, the Verdict, which is going to be available in Moonshine Lucid as a AM Worlds Fundraiser is going to be a overstable midrange, watch for the full production to be realest in 2014. The other, is the Truth! I’m personally really excited for this disc, not just because it’s going t be my signature disc, but because this disc is phenomenal! It’s a very versatile mid that will hold any line you put it on, fast, tons of glide, very predictable flight, and must have for anyones bag! Check it out, looking at a late July release.

All Things Disc Golf: The PDGA National Tour is past the midway point with only three events left. What is your take on the current competition and level of play?

Eric McCabe: The competition level is well above what it used to be. I’ve been touring for 10 years now, and the competition seems to be getting younger and younger, and tougher and tougher! It’s amazing the level of play every year, Ricky seems unstoppable, you can NEVER count out McBeast in his final round ridiculousness, Shoestring seems to throw in every round he plays, Feldbeard still has it…I could go on forever! All in all this is a great thing, with competition level increasing, it just means the sport is progressing in the correct direction! I’m excited for the future!

All Things Disc Golf: You recently were in Europe for a few tournaments. What was that trip like? Make it to the Latitude 64 headquarters at all?

Eric McCabe: Traveling to Europe is always something I look forward to every year. The Europeans treat you like a true professional, and really know how to run a great event! Jussi Meresmaa TDs one of my favorite events, The European Open. The Beast is on top of my favorite courses list. If you ever find yourself in Nokia, Finland, this course is a MUST!

The Latitude factory is in Skellefteå, Sweden, I was in Copenhagen, Denmark on my last trip so unfortunately I was too far away. I do plan on making it up there at some point though.

All Things Disc Golf: What do you have planned for the next few weeks? Any other big international trips planned?

Eric McCabe: The next few weeks gets a little CRAZY! I’m currently in Syracuse, New York taking a week off, visiting my lovely girlfriend, Denise Cameron. I’m picking up Jon Baldwin in Rochester NY early next week and we’re heading to Kansas City for the KCWO National Tour event. While there, I’m picking up DD Teammate, Paige Bjerkaas for a couple weeks. After KC Paige and I will be driving to the West Coast, hitting up the Canadian Championships in Kamloops BC followed up by the Beaver State Fling. Then shoot back across the country to my hometown of Emporia Kansas for the 2013 Amateur World Championships. I’m really excited for this years AM Worlds, I’ll be there helping out in anyway I can, running clinics, TDing a course, spotting, scorecards..it’s going to be a great time!! Day after the AM Championships is over I’ll be flying back to Europe for the European Open, then right back to the states for the Professional World Championships in Crown Point IN…which is actually where I won my World Title in 2010! So yeah, it’s the busy time of year!!

All Things Disc Golf: You travel a lot with your dog, Ralph. Is it nice having your dog around while you travel the country

Eric McCabe: Absolutely! He’s my Best Friend, everyone loves seeing Ralph on tour, and always puts me in a good mood if I have a bad round.

All Things Disc Golf: Who makes it possible for you to play disc golf for a living?

Eric McCabe: First and foremost, Dynamic Discs. I’ve been with DD since the beginning, and I couldn’t do what I do without them! Thanks to the whole DD Crew for everything, Jeremy Rusco, Wendy Rusco, Clay Houser, Adam and Tyler Searle, SteveO Storrie, Shannon Savage, Jeremy Kindy, Fritz, Smitty, Pete Cashen, Bradley Crow, Scott Reek, and of course all my DD Teammates!

Cushe Shoes is another one of my sponsors that helps keep me going! They have the most conferrable and durable shoes I’ve ever worn on a DG Course, check them out!

Bearded Brothers for all their great energy bars!

Thanks again to McCabe for helping shed some light on his little corner of the disc golf world.