You are at:Home»Reviews»Drivers»Dynamic Discs Witness Review 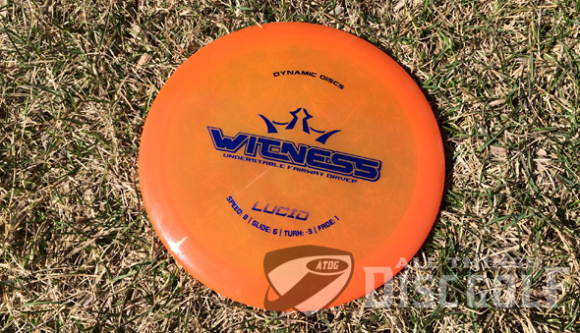 When a disc golfer comes across a new disc that is labeled as a disc that is great for beginner players or golfers with slower arm speeds. While that statement usually runs true, more experienced players shouldn’t always count these discs out. The term “beginner friendly” usually translates to understable which does make a disc easier to throw. In the case of the Dynamic Discs Witness, it certainly falls into the beginner friendly group, but there are many features that will appeal to golfers with more of a cannon. It’s a disc that is very versatile.

Dynamic Discs says this about the Witness:

The Witness is a great fairway driver for players with lower arm speed. An understable flight path and tremendous glide make the Witness an excellent choice for players looking to gain distance without sacrificing accuracy. Bigger arms can use the Witness for controlled anhyzers, hyzerflips, and rollers.

Dynamic Discs sent us a Witness to review and we were able to hit some unique lines with their latest release. In short, you can describe the Witness as an understable counterpart to its Escape brother while being even more similar to its Westside Discs Hatchet cousin.

First, we’ll start with the slower arms. The Witness brings a flight that is, without a doubt, understable. It is understable to the point that even a slower arm might get a little bit of an s-curve out of it. On a flat release, even slower arms can get a little turn out of it which will help you gain some distance. If you need a hyzer flip style shot, it will easily flip up for you and glide down the fairway. All in all, it will be a very controllable disc that isn’t intimidating for beginning players. The Witness is a disc that can help new players learn about disc flight and what it takes to make a disc do different things in the air.

For power players, the Witness brings a few other things to the table. With the understable flight, you’ll be able to produce some very long turnover shots for that tough to accomplish left-to-right controlled anhyzer. Depending on the height in which you release the disc and the distance needed, you might even need to give the Witness a little hyzer on release and allow it to naturally turn over on its own.

We also found the Witness great for the low power finesse shot. If this was a slight turn over, a tight little straight shot, or a very controlled little sweeping hyzer, the Witness was able to hold up just fine. You can throw it at about 75-80% and it will fly very controlled and hold the line that you wanted it to. It can come in handy when you don’t want to fully dig into a fairway driver and you know you won’t get the control with a faster driver. The Witness can be almost a “utility” disc for experienced players. Oh, and rollers, yeah, you can get this down and let it rip easily! 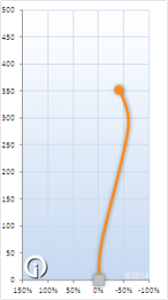 The other two factors that come into play for disc golfers of all levels with the Witness is the speed and glide. The Witness clocks in sightly slower than the Escape at a speed 8 and has a very similar amount of glide. The glide was very similar to the Westside Hatchet and really helped us gain some distance with the Witness. Those controlled anhyzer shots can really carry with the glide. It doesn’t just want to drop out of the sky.

Dynamic Discs rates the Witness at 8, 6, -3, 1. After our tests, we’d put flight ratings for the Witness at 8, 5.5, -3 to -3.5, 0.5 to 1. The glide and speed are there and you can’t miss the understable flight. Stronger arms will see a little more turn, but regardless of your arm strength, the fade is minimal. It will allow anhyzers to finish flat, but it won’t send things back toward center.

The flight chart from inbounds Disc Golf shows this understable flight we’ve been describing. It will kick into the turn quickly and hold onto that for most of the flight before finishing with the minimal fade.

As an understable compliment to the Escape, the Witness can be a great disc for any level of disc golfer. Stronger arms can carry out some big sweeping turnover shots while weaker arms will be able to produce some nice straight lines with it. It is another great step into higher speed drivers.