You are at:Home»Reviews»Putters»Dynamic Discs Warden Review 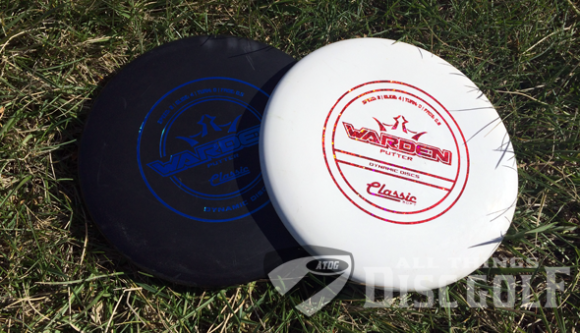 When Dynamic Discs released their first putter, the Judge, disc golfers were already calling for a second one. People were wanting a beadless version of the judge. This October, Dynamic Discs has delivered on the beadless putter in the form of the Dynamic Discs Warden. The Warden has a similar feel to the Judge with a slightly more understable flight.

The Warden takes everything players love about the Judge and removes the bead to provide additional comfort in the hand. This putter has a very straight flight path and can fly just about any line you want. If you prefer a beadless putter with a straight flight path then the Warden is the putter for you.

Dynamic Discs sent us a few Wardens to test out on the course and after a number of throws and rounds with the Warden, it’s hard to find a negative about this disc. We started our tests on the teepad and moved our way in towards the circle. As a driver, the Warden was very straight for the entire flight. In the Classic version, the Warden was very stable at high speeds and would really hold the angle we put it on. On a few throws with a decent tailwind the Classic Warden would perform a little more stable than a throw without a tailwind, but this is typical of most discs. Even with it’s high level of stability at high speeds, you will likely have better options for throwing into a headwind.

The Classic Soft Warden was a touch more understable than its Classic counterpart. We could give it a little hyzer and have it flip to flat, or allow it to carry a slight amount of turn. It certainly won’t roll over on you, but enough to see a little less stability.

When we moved a little closer to the basket and used the Warden on approach shots, we found the touch shots where we were going for accuracy were a little easier with the Classic Soft version. The very slight understable flight allowed us a little more control. The Classic version would continue to perform a little more stable at the start of the flight and even showed a little stronger fade when used as an approach. Even with the added effort at the end of the flight, it was still a very straight disc.

On both our drives and approach shots, we saw very little fade in the Classic Soft version and just enough fade to make you notice it in the Classic Warden. The Classic Soft would break out of a slight turn and land flat, or settle down on a very straight line. Don’t expect a lot of right to left movement on the fade of the Warden. The Classic Warden’s fade was a little more noticeable with the strength of the fade depending on the speed and angle of the flight. If you gave it hyzer, it will finish on that line. If you released it flat, it will carry left just a touch. It did seem strong enough to break out of an anhyzer back to a flat angle.

The Warden has a very similar speed to the Judge, but might carry just a little less glide. Maybe it was the weather, maybe it was the lack of a fade, but the Warden’s glide was there, just not as strong.

Looking at the flight chart from inbounds Disc Golf, you’ll notice the very straight flight with distances right around other similar putters. At high speeds you won’t see much turn out of the Classic version which is followed by a very small fade.