You are at:Home»Reviews»Midranges»Dynamic Discs Verdict Review

Soon after the release of the Dynamic Discs Truth disc golfers were wanting a more overstable version of the popular midrange disc. In reality, the Verdict was nearly the Truth at one point. The disc that was initially tooled as the Truth came out a more stable than what they wanted so they went back and retooled that version to create the Truth and renamed their initial product the Verdict. These truly are discs of the same family and make great compliments to each other.

Dynamic Discs sent us a few Verdicts to test out and after our time on the course, it really is a great compliment to the Truth. The Truth flies very stable at high speeds and has a very minimal fade at the end of the flight. After some time with the Truth that fade nearly goes away. We often found ourselves wanting the same stability at high speeds, but with a stronger fade at the end for something that can fight a headwind or help tuck behind some trees.

The Verdict has the same flat top feel in the hand that the Truth has. If you don’t like a big domey top on a midrange, the Verdict will feel right at home. This flat top also allows the Verdict to come out very quickly and cleanly and will get up to speed right away. The Verdict doesn’t have a ton of glide, but will rely on speed to get down the fairway. It is a slightly faster midrange than others in this category.

When it comes to stability, there is no doubt the Verdict is stable at high speeds. It will hold any angle that you put it on on release. If you give it hyzer, expect it to hold that hyzer angle, if you throw it flat, expect it to remain flat. If you give it a little anhyzer and try and turn it over, it will flex back out and fly straight. It is a true headwind disc.

The Verdict’s fade is a little unique. It isn’t a hard knifing fade that will cut to the left really hard, but it is more of a hard, forward penetrating fade. The disc will actually start to track to the left as it reaches the end of the flight before really cutting over. It won’t just reach a point and then dive left. It will gradually head left, but with some power before dumping out at the end. This actually helps with a little distance as well. 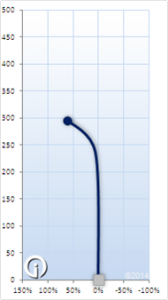 The flight chart from inbounds Disc Golf shows nearly the exact flight we experienced with the Dynamic Discs Verdict. Very stable at high speeds and a nice fade at the end of the flight.

When Dynamic Discs calls the Verdict a great compliment to the Truth, they really mean it. They have a very similar flight, but the Verdict is just a little more stable. How many times do you fall in love with a disc and wish you had a version that was a little more stable or a little less stable. Similar feel, but a flight that is just slightly different. When it comes to the Truth and Verdict, you will get that exact thing. More stable, better wind fighter, same great feel.