You are at:Home»Reviews»Midranges»Dynamic Discs Truth Review

For many disc golfers, one of the toughest shots to execute consistently is the dead straight drive for around 250-300 feet. You need to stay accurate, yet you still need distance to get it down the fairway. It’s important to have a disc you can reach for time and time again. You want something that is stable, yet not too overstable or too understable. You want to find your target, let one rip and trust it will hold that line. The Dynamic Discs Truth does exactly that.

Dynamic Discs says this about the Truth:

The Truth is a very true, straight flying midrange that is very comfortable in the hand and easy for players of all skill levels to throw. You can put any line on this disc and expect it to fly exactly how you throw it. Anhyzer, dead straight, or smooth hyzers are exactly what the Truth was designed for. Signature disc for 2010 World Champion, Eric McCabe.

In our interview with Dynamic Discs team member Eric McCabe a few weeks ago, he said after leaving Discraft he was struggling with his midrange game, “The Buzzz was a staple in my bag for the past 10 years, so of course there was a little “withdrawal” at first, but with the Suspect and soon to be released Verdict, and Truth, which will be my DD Signature disc, DD will have a solid Midrange lineup!”

Well, the Truth has now been released and we can see why McCabe put his name on it. Before we get into the details, the Truth flies like a faster, slightly longer, and slightly more stable Discraft Buzzz. Don’t be surprised to see McCabe and other fellow Dynamic Discs team members put the Truth in their bag and rely on it for many shots.

Dynamic Discs sent us a Truth to review and the results were outstanding. With our first throws we noticed just how stable the Truth was at high speeds. When released flat, it would hold that angle the entire flight. Don’t expect the Truth to flip up much when released with a little hyzer angle. We were able to throw the Truth into a pretty strong headwind and we were a little surprised with just how stable it was. When faced with a 15-20 mph headwind the Truth held up quite well. We saw a little added turn, but not much at all.

The Truth does have some fade at the end. As the Truth would start to slow down, it would start to fade left. It never really produced any big skips, but we saw a very consistent finish with each throw. When compared to a Buzzz, the Truth’s fade was stronger. We would agree with the 2 rating for fade.

Another thing you’ll notice from the Truth is the speed and the distance you’ll get out of it. The five rating for speed and glide seem very accurate. The Truth really jumps out of your hand on release. We were actually starting to see distances that were similar to our fairway drivers with it. Because of the stability of the Truth, you can really give it some power and it will still remain nice and straight.

Even with the high rating for glide, the Truth has a board flat top. With the slightly wider rim than other midranges, the Truth comes with a very comfortable grip. 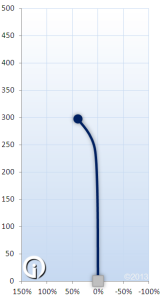 Looking at the flight chart from inbounds Disc Golf, you’ll see the very stable flight and small fade. This is very accurate to what we were seeing on the course.

Dynamic Discs gives the Truth ratings of 5, 5, 0, 2. We agree across the board with these ratings. The Truth is a faster midrange with great glide and a very stable flight. We’re anxious to see how the Truth wears and just what people can do with this disc. As we stated before, the Truth is a faster, slightly longer, and slightly more stable Buzzz.