You are at:Home»Reviews»Drivers»Dynamic Discs Trespass Review

The Trespass is a wide rim, high speed, overstable distance driver with precision control and maximum distance. A very accurate driver, a must for the arsenal.

Following our normal practice for reviewing discs, we took a trip to the local course to where we could test it on the course and in the field. On our first few throws, we did notice just a little bit of turn from the Trespass. If we gave it a little bit of a hyzer angle on release, it would flip up flat on a nice strong throw. Most of the time, the amount of turn was quite small — don’t expect a lot of movement. There are certainly more stable options on the market, but that isn’t always what you want. The added turn does allow the Trespass to carry out a nice full flight. Stronger arms who tossed the Trespass did see a little more turn than us. If you are a disc golfer with a very strong arm, you could even rate the turn at -1 for the Trespass. If you have a slower arm, expect more of a 0 for turn.

While the turn was small, the fade was much stronger. We would agree with the 3 rating for fade for the average disc golfer. Weaker arms might see a slightly stronger fade than others. When thrown into a decent headwind the Trespass does have a strong enough fade to fight back at the end of the flight. If it is a very steady headwind, you still might want to reach for something a little more stable at high speeds though. If you need a long distance shot to finish left, in most conditions, the Trespass will do the trick.

Regardless of wind conditions, the Trespass does need a strong throw to really hit full speed. As with other speed 12 discs, the Trespass does have a wide rim and needs just about all the strength you have to get it to fly as advertised. The Trespass also comes with above average glide that helps it carry a little more. Even with a large amount of glide, you’ll never feel like you’re out of control when throwing the Trespass. 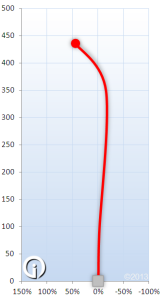 When you look at the flight chart from inbounds Disc golf you’ll notice the early turn followed by the strong fade at the end. We would agree with Dynamic Discs when they say the Trespass is a very accurate driver. We were able to produce very predictable throws all the time. We knew we could keep it on a line and had a very good idea of where it would end up.

The ratings given by Dynamic Discs seem to be fairly accurate during our tests. We’d agree with the speed and glide numbers for sure. The turn and fade might be slightly more or less depending on your arm strength. Overall we’d rate the Trespass at 12, 5, -1-0, 3-3.5.

The Trespass has the ability to become the go-to distance driver for many disc golfers. With a lot of speed, glide and a predictable flight path, the Trespass could be come a driver to rely on when you really need the distance.