You are at:Home»Reviews»Drivers»Dynamic Discs Thief Review

In the PDGA approval for the Thief, Dynamic Discs says everyone should find something to like about the Thief:

During the Trilogy Challenge the Thief was available in BioFuzion plastic and has now been released in the popular Lucid plastic. While the flights are very similar, this review initially talks about the flight of the Thief in BioFuzion and then discusses the slight differences in Lucid.

The rim of the Thief is very comfortable and the shape of the disc itself provides a very controllable grip. On all of our throws we always felt like we could use a power grip and get it down the fairway. One thing to remember is that the Thief is more of a finesse driver than a power driver. It is tempting to want to reach back and let a drive fly down the fairway with all of your power. Our best throws in our tests was when we took a little power off of it and let the disc do the work.

Even though it is advertised with a turn rating of 0, if thrown flat, you’ll see the Thief kick into a little turn and begin a slightly understable flight pattern. On a wide open fairway, the Thief will really shine. Lay it down the middle of the fairway and the turn will start to take it slightly to the right before finishing back toward the center. If you drop the wing down a little bit and release it with some hyzer you’ll see it flip up all the time and ride a very straight line. Power throwers will certainly see more turn, but for those with slower arm speed will still be able to see a very straight flight from the Thief.

The slight turn really does help it hold tight lines. We were wanting to sneak it through some trees on a tight hole and when we took a little power off of the Thief, we knew we had the control we wanted and hitting the window was very easy.

The Thief has a decent amount of glide which helps it carry down the fairway. The glide was really needed to help the Thief carry out the full flight pattern. The Thief’s fade isn’t that strong and it needs the added time in the air to really break out of the fade and finish to the left.

Our Trilogy Challenge was on a relatively windy day and quite honestly, the Thief isn’t the best disc in the wind, but that doesn’t mean it isn’t a good disc though. When faced with a tailwind or a moderate crosswind, the Thief flew on quite a straight line and did so on a very consistent basis. If you’re in the woods and need the added control, the Thief will perform with style.

We were also able to throw the Thief in calmer conditions and did see a very predictable straight flight that includes a little turn each and every time. It isn’t a wind fighter, but it isn’t intended to be. Don’t underestimate the value of a neutral fairway driver like this. The amount of control you can get while you reach distances just beyond what you can hit with a midrange can be very useful.

Dynamic Discs sent us a Thief in Lucid plastic and instantly took the award for the prettiest disc we’ve seen lately. Looks aside, the Lucid Thief performed nearly identical to the BioFuzion version, but was just a touch more stable at speeds. We still saw a little bit of turn, but it wasn’t as much as the BioFuzion Thief.

After the Trilogy Challenge we gave the Dynamic Discs Thief flight ratings of 8, 5, -1.25, 2. Dynamic Discs rates the Thief at 8, 5, 0, 2. Overall, we’d rate the Lucid Thief at 8, 5, -0.75, 2. It’s a nice combination of speed and glide that forms a very solid fairway driver. It isn’t as fast as the Escape, but it doesn’t need to be. Disc golfers with even a moderate arm speed will be able to get a little turn out of it while stronger arms can almost use it as a turnover disc. Regardless of your arm strength, expect a moderate fade at the end of the flight. 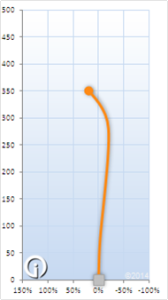 The flight chart from inbounds Disc Golf shows a flight very similar to what we were seeing on the course. The Lucid Thief might have a little less turn than shown in the chart, but the overall flight is very accurate.

Now that it is available in Lucid plastic, the Dynamic Discs Thief is certainly worth a look when it comes to finding a go-to fairway driver. The Thief can certainly fill that void for many disc golfers. From straight ahead shots, slight hyzers, or even longer controlled anhyzers, the Thief handled it all with ease. Because it is slightly faster that some fairway drivers, it can be a nice step up in terms of speeds from midranges as well.

The Thief can be a sneaky long fairway driver. It doesn’t need a lot of power to fly far, nor does it want a lot of power to fly far. It has a very nice neutral flight with a lot of control. The more we threw the Thief the more we could really get it to do some great things on the course. If you were unsure of the Thief at the Trilogy Challenge, give it a shot in Lucid plastic. It might be exactly what you were wanting.