You are at:Home»Reviews»Midranges»Dynamic Discs Suspect Review 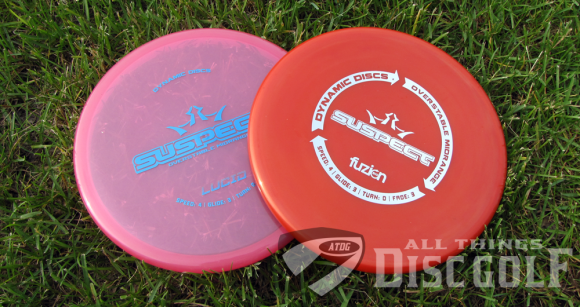 One of the latest midranges to come out of the Dynamic Discs camp is the Suspect. The Suspect is an overstable midrange a very flat top. The Dynamic Discs Suspect’s flat top takes away some of the glide, yet also provides a very controllable, small feel to the disc.

With a slightly overstable flight path, small diameter, and great feeling flat top, the Suspect will give you confidence off the tee or around the basket. The Suspect can handle headwinds and fight back on forced anhyzer shots. It shares the best characteristics of both a midrange and a putter and will fill that tweener slot in your bag.

Dynamic Discs sent us a Suspect in Lucid and Biofuzion plastics. Both versions had a board flat top.

We first started out on the teepad to see what the Suspect could do. In our first round of testing we were faced with a cross wind from left to right at about 15-20mph. The hole was about 250 feet away, slightly to the right of the teepad. Without explaining every little detail for the hole, the best possible shot was straight off the tee with a slightly overstable disc. You hope your shot either fights the wind and finishes straight, or will glide slightly to the right and land near the basket. The Suspect did more of the latter. While stable enough to avoid flipping over in the crosswind, it did carry to the right just a little bit and land very straight as it fought the wind.

The Suspect isn’t as overstable as other similar midranges, yet still on the overstable side of things. Where we really saw a nice flight was when thrown on a nice high hyzer line. The Suspect will hold the hyzer angle it is released on for the entire flight. If you need to sweep around some trees to get to the basket, the Suspect will go exactly where you put it on. Don’t expect it to veer off that line.

Because of the Suspect’s lack of glide, the fade kicks in really late. Actually, the Suspect has more of a “drop” than a fade at the end of the flight. It will head left, but it will drop quickly once it loses speed. Don’t expect the Suspect to glide away on you.

During our tests, the Biofuzion Suspect showed just a touch more stability at the end of the flight and produced slightly more glide, but not much more when compared to the Luicd Suspect.

The flight chart from inbounds Disc Golf shows the general flight path of the Suspect. You’ll see the stable flight at the start of the throw and the moderately strong fade at the end. In our tests the length of the fade really depended on how much height we gave the Suspect. If kept low, it won’t fade that far to the left. If given some height, it will finish its flight left, but drop quickly. Overall, we’d rate the Suspect at 4, 2.75-3, 0, 3-3.25

The Suspect will fit in the position of a longer putter and shorter midrange. It won’t show a large amount of glide, but will stay on a line that you put it on. Our best results were seen when thrown on a hyzer angle. Many times during a round of disc golf, you need that little touch shot where you need the disc to either fight some wind or head left… the Suspect will fill that void nicely.