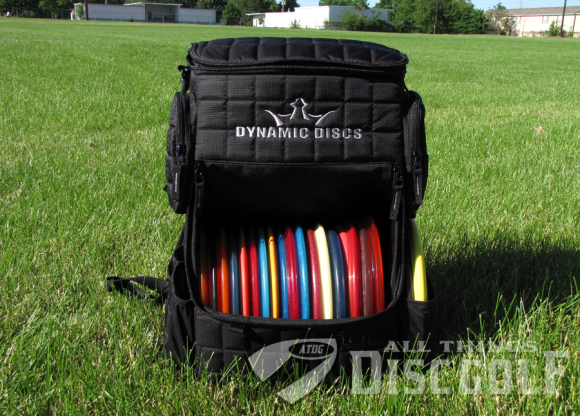 Dynamic Discs made big news when they announced their own line of discs in late 2012. Then, they turned heads again when they announced they were releasing their own line of disc golf bags. Currently, Dynamic Discs has three bags of various sizes: the Ranger, Commander, and Sniper. The Ranger is a backpack style bag which holds over 18 discs in the main compartment with storage of at least another 6-10 discs. The Commander holds 20 discs in the main compartment. Dynamic Discs also has quad straps available which can be added to the Commander bag. Finally, the Sniper bag holds 8-10 discs — perfect for a quick casual round.

Dynamic Discs sent us a Ranger bag to test out and take out to the course. When you first pick up the Ranger one thing stands out right away: the weight, or lack their of. The Ranger is a very light bag. When you’re holding the Ranger when it is empty, it is almost hard to believe just how light it is. Don’t take light for weak though. The Ranger is very sturdy.

The Ranger does have a very strong, rigid frame inside. This took a little getting used to on our backs. While there is an ample amount of padding on the back of the bag, don’t experience a lot of flexibility in the bag. It was a little uncomfortable at first, but once we got used to it and had the straps fitted correctly, the bag became more comfortable over time. While it is rigid, we didn’t think about trying to sit on it and using it as seat. We don’t think it is quite that strong.

When fully loaded, the bag still felt very light to us. We stuck 18 discs in the main compartment which included two putters and seven midranges. We’ve seen some reports of larger midranges not being able to fit in the bag comfortably. We had no problem at all putting in our midrange discs during our rounds. When we were done, everything was able to zip up nice and neat as well. The opening for the main compartment was nice and large and allowed us easy access to the discs on each side of the main compartment. We didn’t have to dig in just to get a disc on the edge.

Because the putter pocket is on the side, this opens up the top of the bag to other uses. At the top of the Ranger, there is a very large storage compartment. It is easily large enough for a jacket or hooded sweatshirt. If you aren’t needing a jacket, you can easily store towels, food, or any other items you might need during a round. The compartment is also large enough to store extra discs. We were able to store an extra 6-8 discs up there depending on their size. When kept unzipped, the top flap will rest on top while still allowing easy access to your discs. This top compartment is very versatile. If you need storage for clothes, extra discs, or accessories, this top pocket is a big plus about the Ranger.

On the side of the Ranger you’ll find a few extra pockets for storage. One can easily hold a wallet, keys and cell phone, while another is perfect for a small towel, scorecards, minis, etc. A lack of storage is certainly not a problem for the Ranger. Straps are also available to hold an umbrella or stool.

The back straps on the Ranger are on the thinner side of things. Other bags do offer thicker straps with added padding when compared to the Ranger. The straps are still comfortable though. One downside with thicker straps is more difficulty wearing the bag when you have added layers on. The Ranger’s thin straps should be comfortable all year round.

Other features include a water resistant bottom material with small feet to keep your bag off the ground and a removable disc divider for the main compartment. The Ranger also comes with a limited lifetime warranty covering defects in materials and workmanship.

While testing the bag, we had many people ask us about the bag. One of the most common questions was the price. The Ranger retails for $174.99. With a lower price than other disc golf backpacks, the Ranger brings a lot of value for the price. You’ll get plenty of room for disc storage and added storage for other items.

If the idea of spending between $200-250 on a disc golf bag is tough to swallow, the Ranger offers a very nice alternative. You’ll get a very light, yet sturdy, bag that will provide a very consistent experience. When all is said and done, if you are in the market for a disc golf backpack, the Ranger is really worth a look.