You are at:Home»Reviews»Midranges»Dynamic Discs Justice Review

The utility disc in disc golf can be one of the most important discs in your bag. It is designed to do only a handful of things, but it can really fill a hole in your bag. These tend to be really overstable midranges that can open up many shots. The Dynamic Discs Justice is the latest to be released in this category. The Justice is certainly overstable, but also has a lot of control and predictability to it.

Dynamic Discs says this about their new midrange:

Strong winds will make the most experienced player look like a novice. They have forced us back into the laboratory to solve the midrange question. Our tests have led us here. The Justice is served. The Justice by Dynamic Discs is going to become your new utility disc. It will not turn over. Throw the Justice one time and you will not need to reach for anything else for a short distance, overstable answer.

Dynamic Discs sent us a Justice in Lucid plastic to review and we’ve compared it along side other popular utility discs like the Innova Gator and Discraft Drone. In fact, it also has some qualities closer to the Innova Viper.

The Dynamic Discs Justice feels similar to the Verdict. It’s blunt nose and flat top fit nicely into your hand. It certainly isn’t a domey disc by any means and ours nearly had a concave top. It is subtle, but you can feel it.

While it has a decent sized rim for a midrange leading to a nice amount of speed, it doesn’t have a lot of glide. The lack of glide is a positive since you really want to control a disc like the Justice. It isn’t going to carry down a fairway. It really isn’t able to with the amount of stability it has at both high and low speeds.

The high speed stability of the Justice is really what defines it. Dynamic Discs gives the justice a positive 0.5 rating for turn. We’re always a little skeptical about ratings like that, but in the end, it was accurate. It is more stable at high speeds than the Gator or Drone and almost approaches Viper territory. If you give it any ounce of hyzer on the initial release, it will be holding that line the whole way. It won’t even try and fight out of it. Even if you intend on giving it some hyzer on release, you can quickly over compensate and end up with a flight that will want to finish left a little too early. Be conservative with the hyzer angles and you’ll get some nice results.

Even on throws where we turned the Justice over (on purpose) and released it with an anhyzer angle, it would break out of it quickly, return to flat, and actually kick into a fade soon after. You wanted a wind fighter? You got a wind fighter. Mastering the high speed stability will be key with the Justice. Once you get a hold of the right angles and power, you’ll gain a lot of control in this sucker.

For as strong as the high speed stability is, the Justice’s fade isn’t that dramatic. Does it fade? Yes, of course. It is a little more predictable though. It will always finish to the left, but it won’t get away from you too much. If you keep it low, you’ll get a decent skip out of it, but if it is coming in with some hyzer, it will hit the ground quickly, but it will hit and not skip that far. When released with hyzer, it will hit the ground at that angle and almost knife into the ground instead of skipping off of it. You can trust it will actually finish close to where it first lands instead of skipping away. Again, it goes back to the initial release angle.

In terms of distance, the Justice will likely be one you don’t choose for initial drives on most holes. Sure, there are some that suit the flight of the Justice, but you aren’t going to gain a lot of distance out of it. For approach shots in the fairway, you’ll be able to reach for the Justice and not second guess yourself. During our tests we were able to confidently throw the Justice on sweeping hyzer shots and saw pleasing results time and time again. 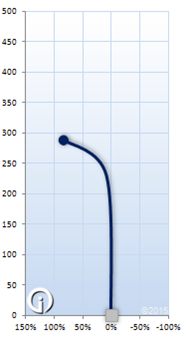 Overall, we’d rate the Dynamic Discs Justice at 5, 3, 0.5, 3.75. The fade is more than a Verdict, but not by much. The high speed stability is certainly there and can lead to what seems like a very hard fade, but the flight itself is very predictable.

The flight chart from inbounds Disc Golf shows something close to what we saw during our tests. A very stable flight to begin with before a decent fade at the end. Distances will depend on just how much power you have. Don’t rely on glide on this disc.

The Dynamic Discs Justice fills a hole in their line up that many have been wanting to find. You’ll often need a utility disc like the Justice to help save a par or get yourself out of trouble. It isn’t going to win any distance contests, but it will be able to help you get around obstacles on a big hyzer line or let you keep it low and skip it up next to the basket. Give it a little anhyzer and you can pull of some tight s-curve shots with ease.

There is a little bit of a learning curve with the Justice. Master the release angle and power required and you’ll have a disc you can reach for time and time again. It’s quite the tool to have in your bag.