You are at:Home»Reviews»Midranges»Dynamic Discs Fugitive Review 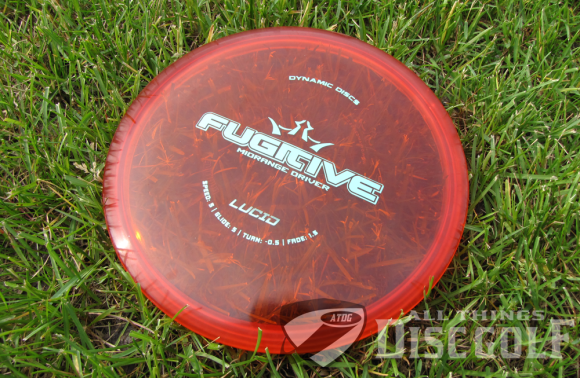 The Dynamic Discs Fugitive was the first midrange released by the Emporia, Kansas based company. When you combine the stable flight, fast speed, and high glide, the Fugitive becomes a midrange disc you can rely on.

The Fugitive is the straight flying midrange driver that holds any line you put it on, pin-point accuracy and easy grip help for consistent release and accurate flights.

With the speed rated at a 5, we were anxious to see just how fast it really was on the course. There is no doubt that the Fugitive is a very fast midrange disc. We weren’t quite getting the distance of a fairway driver with it, but when you factor in the glide, it comes very close. You can really let the Fugitive fly on a strong throw and expect to reach distances you normally don’t with other midranges.

The top isn’t flat as a board, but it isn’t really domey. It does have a little curve to it, which helps the disc glide out. Even with the added glide, the Fugitive feels very controllable. It has just a little bit of high speed turn and a touch more fade at the end. If you need it to be on a hyzer line, it will first flip up a little bit before finishing predictably. If thrown on an anhyzer, the Fugitive will hold that line as long as it could before landing flat at the end. For us, the best results came when thrown flat and straight. The Fugitive will turn ever so slightly at full speed before returning to the left at the end of the flight. It was nearly a point and shoot driver for us at times. All it needs is a strong snap and flat release and you are in business. 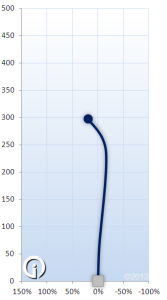 The Fugitive didn’t really like a headwind during our tests. It has a little too much high speed turn to be thrown into a headwind and expect great results. The Fugitive was never really advertised as a midrange for wind though.

We also used the Fugitive as an approach disc and saw predictable results. We were able to use it’s added glide and allow it to almost float to the basket at times. It doesn’t need a lot of power to get moving and doesn’t have a very strong fade at the end. This allows you to nearly use it as a point and shoot style approach disc.

When you look at the flight chart from inbounds Disc Golf, you’ll notice just a little turn, a nice casual s-curve, and a moderate fade at the end. The added glide and speed will help push the Fugitive down the fairway. We’d also rate the Fugitive at 5, 5, -0.5-1, 1.25-1.5.

If you’re looking for a midrange that can be trusted off the tee to hit some straight lines and a midrange that will provide great control as both an approach disc and driver, the Fugitive is worth checking out. Once you get a feel for the slight high speed turn, you’ll really understand just what the Fugitive can do.