You are at:Home»Reviews»Drivers»Dynamic Discs Freedom Review

In disc golf there is a difficult fight that many run into. You want to throw far, yet you don’t have the arm speed or strength to throw a high speed distance driver without it being too overstable. The Dynamic Discs Freedom is a disc that talks to this exact audience. For a high speed driver, it doesn’t take a lot to make it turn and thanks to just enough fade, the Freedom fade back to create a full flight.

Dynamic Discs says this about their latest release:

The Freedom is a 14 speed understable disc in the vein of the King or Havoc and the fastest that Dynamic Discs has ever produced. For the big arm throwers, this disc will go a long way on an anhyzer line with a predictable fade back to stable at the end giving easy distance on hyzer flip shots. For those with lower arm speeds, the Freedom is the long distance driver that you have been wanting and asking us to produce. This disc will sail past that spot in the fairway where you normally land. It will take your usual throw and translate it into uncommon distances. Free your shackled expectations of the distances that you can achieve!

Dynamic Discs sent us a Freedom to review and even in the colder winter months were able to see some very nice distance on the course. Three things stand out when you first grab the Freedom. The first is the rim size. The Freedom’s rim measures in at 2.4cm. It can be a little tough to get a grip on the wide rim, especially with the low profile (more on that in a moment). The wide rim does translate to a fast flight as it does carry quite well.

Another thing you’ll notice right away is the very shallow depth of the rim. While you are still able to get a hold of the rim, fatter fingers might find it a little uncomfortable. It has a similar feel to the Innova Katana.

The turn was certainly there, but it had a governor on it.
The last thing to note is the very sleek profile. The Freedom certainly isn’t domey and after a slightly rounded shoulder, you get a very flat top. This allows the Freedom to cut through the air quickly and achieve the distance you’re looking for.

It didn’t take many throws to get a feel for what the Freedom wanted to do. We then learned it can be a little touchy and your arm speed plays a big factor in how you need to accurately throw the Freedom. Let’s first start with trying to throw it for pure distance on a relatively straight line.

In our tests, the testers who had about 350 foot power were the ones who saw the best results from the Freedom. Slower arms could still accurately throw it, but saw a little less turn. Stronger arms were able to get the Freedom to dance quite a bit and we’ll cover those results later.

For those 350 foot power throwers the Freedom would rip out of the hand and get up to speed instantly. All it wanted to do was fly fast. We were slightly surprised to see just how quickly the Freedom wanted to turn. On a flat release the Freedom showed one of the earliest turns from a high speed driver we’ve seen. When going for max distance, this added turn is what you want so you can carry out a full flight. We should note that when we talk about the “speed of the turn” it didn’t gradually head from left to right, it really turned hard on us. The interesting thing was that the turn found it’s limit and held the line. It went 0 to 60 in seconds, but remained at 60. The turn was certainly there, but it had a governor on it.

As the Freedom held that turn while carrying down the fairway, we soon saw the fade kick in and return it back to the left. On our best throws with the Freedom, we were able to trust the Freedom to turn and after flying down the right edge of the fairway, it would fade back to just past the center line we initially threw it on. Best of all it performed this accurately with some great distance. The fade is hard enough to make it return, but isn’t that overwhelming. We could argue that it has a little less fade than the Katana. It also has a weaker fade than the Westside King.

Another feature of the Freedom that helps with the distance is the glide. For a lower profile disc it does have a nice amount of glide. We saw it really glide out on many throws where it would help hold the turn and allow the fade to naturally bring the disc back to the center.

As we said earlier, the Freedom will perform at a high level for those with 325-350 foot power. The arm speed will translate well to the amount of turn and you’ll be able to control the flight quite a bit. For those with stronger arms, the Freedom will either fly on some big anhyzer lines or you’ll need to throw it on a big hyzer flip. Stronger arms still saw that governor we talked about, but it turned just a hair more. It would also hold this line a little longer due to the added power. It would still fade, but would never be hard enough to return back to center.

On big hyzer flip shots the Freedom would certainly fly with a lot of energy as it would flip flat, then hit into a turn, before showing a small fade. The distances were impressive, but it was a very sensitive flight. As with the Katana, King, or any high speed driver, the nose angle is very important when throwing the Freedom. You have to keep it down in order to see the proper flight.

Finally, it was easy to realize that the Freedom really doesn’t like a headwind and is actually a little sensitive to crosswinds too. The Freedom just doesn’t have the stability needed to hit a headwind. It just isn’t the disc for that. If you have a left to right wind expect to see a little added turn. It will also have a difficult time fading back into this wind. 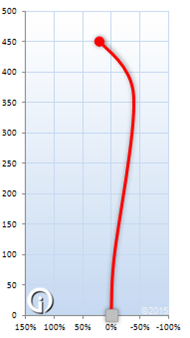 The flight chart from inbounds Disc Golf shows a flight that is quite similar to what we saw. The turn will arrive quickly and hold for nearly the entire flight. The fade will bring it back to the center as it powers down.

Just as some stable-to-overstable distance drivers really hit the sweet spot with high power throwers, the Dynamic Discs Freedom will hit the sweet spot with a very large group of disc golfers. If you’ve been desiring a disc that can achieve some great distance while showing a little turn and fade to produce a natural s-curve, the Freedom is it. It doesn’t take a lot to make it turn, yet it won’t turn too much so you lose control. As long as you aren’t facing a headwind, the Freedom will carry quite far. Master the turn it shows and you’ll be much closer to the basket.