You are at:Home»Reviews»Drivers»Dynamic Discs Felon Review

Dynamic Discs has this to say about their overstable fairway flier:

In the same vein as our game changing Escape, the Felon is a fairway driver that feels great in your hand and comes out easy. Crafted in response to the unforgiving Kansas winds, the Felon is the wind-fighting fairway driver that your bag is calling for. It will continue to sail, without turning over, despite the headwind that is challenging your confidence. When the wind is down, it has an incredibly predictable hyzer finish. When you are facing a low ceiling shot where you need good glide and a strong finish the Felon is your answer. You asked and Dynamic Discs has delivered.

Dynamic Discs sent us a Felon to review and thankfully we had some moderately windy conditions during some of our testing sessions. The Felon’s has a similar, but not identical, feel in the hand to the Escape.We’d agree with Dynamic Discs’ rating and also slot this in the Speed 9 category. Some of our testing group didn’t like how the Felon sat in their hands, due to the concave style of the bottom part of the wing. It wasn’t a major dislike, but was worth noting. Each of the four discs we mentioned at the start of this review (Firebird, Predator, Felon, and H1) has a slightly different feel to them. There is certainly something out there for everyone and all produce a slightly similar result.

The Felon does come out of the hand though nice and clean due to a rim depth that isn’t overly deep, yet isn’t very shallow either. Hands of nearly any size can adapt to it with ease. The top of the Felon isn’t completely board flat, but we wouldn’t call it domey either. It has a slightly steep shoulder before an ever so slightly gradual dome across the top. It is nearly flat, but has just a hint of shape to it.

When the Escape was first released many were wanting a more stable version of it to fit into their bags. As the Escape beats in a little bit of turn will join the party and a stable compliment was quickly on the wish list. Is the Felon a more stable Escape? Yes and no. We’d agree that it is more stable, but we’d actually classify it as an “overstable Escape” after our tests. There is a slot in between these two that would be better classified as a stable version of the Escape.

Ok, so just how stable is the Felon? Dynamic Discs gives the Felon a turn rating of 0.5. For both the average disc golfer and the strong armed pros, we’d have to adjust this number a little bit. First, for the average golfer, it certainly is stable at high speeds. On a few of our test holes the shot calls for you to throw it straight down a certain line with OB to your right before needing it to fade back to the left at the end of the flight. You need a disc you can trust on holes like this. Any understable disc will not perform like you’d want a disc to here. The Felon can execute this shot for you. We’d launch it right down this tight path and for an average arm it would fly lazer beam straight. It’s exactly the type of stability you’d want in an overstable disc like this. Nothing that is over powering, especially for an average arm, and can be controllable.

Now, for power arms, we actually saw the ever so slight hint of turn. This only came on a few throws from the strongest players, but they were able to get the Felon to flip up from a small hyzer or even show a ever so slight turn when thrown flat. It really wasn’t much, but was enough to make us not give the Felon a 0 rating for Turn if you have 400 foot power or more. We’d only bump it to about -0.25 though. Can it still fight a headwind when thrown this hard? Yes, without a doubt.

When we first saw the slight turn we also saw how strong the fade really is. The Felon was showing that slight turn and then in a matter of moments it snapped back to the left and faded with some good power. Whenever we test a new disc and look at the fade rating, we look for if it has that extra little knifing in it. A 3 fade will be strong, but will be consistent and steady as it fades. For a 4 rating it has that little extra gear and will fade hard and then really spike at one point. The Felon does break into that 4 category for fade. If you can keep it low, it will certainly produce a nice little skip for you. The Felon is clearly a disc that will fade for you on a regular basis. Even if you gave it a little anhyzer on release and tried to turn it over, the fade is strong enough to make it kick back on over.

The Felon does have some characteristics that are similar to the other discs we mentioned at the start. First, the easy comparison. The Felon is a touch slower than the Predator, but has a very similar fade. Innova’s Firebird and Felon are close cousins, but do things a little differently. The Firebird seemed a little more stable at high speeds, but the fades were similar. It’s hard to tell, but the Felon might have just a hint more glide too, but the jury is still out on that one. 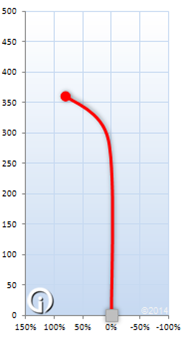 The flight chart from inbounds Disc Golf shows this stable flight we were seeing. You can trust it will hold that initial line you throw it on before jumping into a reliable fade at the end of the flight.

For a while there were really only two discs at the top of the list when it came to overstable fairway drivers. The Innova Firebird and Discraft Predator held the top to slots. Some disc golfers like(d) one over the other as they aren’t identical discs themselves. Now, we feel like the Dynamic Discs Felon can be added to that list. All three are slightly different and aren’t identical at all, but all three can ultimately execute the same shot. The Felon does it with a little added glide when compared to the others and has a flight that was consistent across all of our test throws.

Now available in their Lucid plastic, the Felon is the answer for those who have wanted a consistently overstable fairway driver in one of the most loved plastics on the market. Will it fight those headwinds? Yes. Will it produce that desired overstable flight on every throw? Yes. Its tough making a disc that can stand up to two of the most popular fairway drivers available and Dynamic Discs executed it brilliantly with the release of the Felon.