You are at:Home»Reviews»Drivers»Dynamic Discs Escape Review

For most disc golfers, finding a good fairway driver can be difficult. You need something that is longer than your midranges, but more controllable than a distance driver. One option available today is the Dynamic Discs Escape. The Escape is a faster fairway driver with great glide and control.

The Escape is a fairway driver designed to keep you in the fairway by keeping a true and consistent flight path from beginning to end of flight. Predictable flight characteristics power the Escape past all other fairway drivers, perfect for all skill levels.

When we first got our hands on the Escape, we really liked the feel of it. At a Speed 9 the rim isn’t very large. The Escape actually feels small in the hand at times. You aren’t needing to grip a very wide rim at all. You’ll feel like you have plenty of control. When thrown for max distance, the Escape will really come out of the hand fast. If you can keep the nose down and get a strong snap, the Escape will fly exactly as advertised. If you have troubles getting high speed drivers up to speed, the Escape is worth a look.

When released flat, the Escape will get up to speed quickly and then start to turn. It isn’t a very strong turn, but a steady, controllable turn. On a few open holes, we were able to set this on a path just to the right of the center of the fairway and watched it drift to the right edge before returning to the middle of the fairway. It is a very subtle s-curve, but completely predictable. If you are a fan of the hyzer flip shot, you’ll need a nice strong snap to get it to flip up flat and carry a straight line. We think the Escape shines the most with a flat release though. If you can give the Escape some room to fly, it will produce some very nice lines.

The other feature of the Escape that stands out is the glide. We agree with the 5 rating for glide that Dynamic Discs gave the Escape. It doesn’t glide too much to lose control, yet has enough glide to help it carry out a full flight. On many throws with the Escape, we’d really see the Escape hang in the air longer than expected. With a moderate amount of fade, the glide helps the Escape power down nicely.

We gave the Escape a few throws on a slight sweeping hyzer and saw the glide really help keep the Escape in the air. The Escape would flip up flat and carry forward quite a bit until the end of the flight. 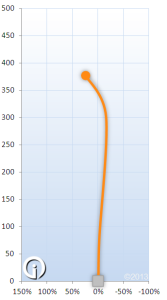 Looking at the flight chart from Inbounds Disc Golf, you’ll see the slight turn followed by a gradual fade. Overall, we think the ratings that Dynamic Discs gave the Escape are close to what we experienced. We’d rate the Escape at 9, 5, -1, 2. In our tests, the Escape had a little more turn than just a -0.5 rating. If anything, we think this was a good thing.

The Escape is a wonderful fairway driver. Disc golfers should be able to hit nice, tight lines while achieving great distance. The Escape’s glide helps it carry out a slight high speed turn, while allowing a moderate fade to kick in at the end. After throwing Dynamic Discs’ first six discs in production, we wouldn’t be surprised if the Escape becomes one of their most popular discs.