You are at:Home»Reviews»Drivers»Dynamic Discs Convict Review

There is a range of discs that sit between a fairway and distance driver that have been popular for many years. Controllable distance with a reliable fade of various strength is the most common theme across the entire spectrum with these discs. The Dynamic Discs Convict is the latest addition to this category right along side discs like the Discmania PD, Innova Thunderbird, and the like. The Convict sits along side their popular Felon, but with a hair more turn and less fade. That combination makes it a little easier to throw, but just as easy to place down the fairway.

Dynamic Discs says in life and in disc golf, before you become a Felon, you must be convicted.

It is a great complement to the Felon with the same feel in the hand but with less stability. The Convict is perfect for those times when you need a straight disc for most of the shot but have to have some stability at the end of the flight. The Convict can also hold the anhyzer you give it before coming back to flat. This disc allows for you to shape your shots to avoid all of the obstacles that are trying to increase your scores.

Dynamic Discs sent us a Convict to check out. It is currently available as a special 2015 Amateur Worlds disc through the Dynamic Discs store.

We already mentioned the Felon, but we’ll also throw a comparison to the Dynamic Discs Escape in here too. The Convict has the same 20mm rim that the Felon and Escape has, but is the same overall diameter of the Felon and 1mm wider than the Escape. The Escape has more of a gradual dome from side to side while the Convict has a nose that is a little more blunt and more of a shoulder before a relatively flat top. Some in our testing group never quite liked the feel of the Escape and found the Convict to be more comfortable in the hand.

You can feel the similarities to the Felon too. The feel of the Felon and Convict are very similar. You might feel a slightly lower profile in the Convict, but the differences are minimal for the most part.

Before we get into details, the flight of the Convict was a very rewarding and pleasing flight. It was a disc that turned many reactions during our tests. “There we go!” was a phrase often said during testing or “That’s what I’m looking for!” was heard from time to time as well. It has the right combination of turn, fade, and glide to really produce something pleasing.

Right out of the hand you’ll see the speed. Sitting in that Speed 9-10 range, the Convict is easy to get up to speed. Once it has a throw with full power behind it, you’ll notice how it really wants to fly fast. The best flights of the Convict are at full speed and reaching that level doesn’t require the strongest arm on the course.

Once it reaches full speed, the Convict will have a little turn to it. This is another discs from the Dynamic Discs, Latitude 64, Westside Discs line that will show turn, but then just reaches a point and remains there. A flat release should bring you the best results, but you can do quite a bit with the Convict. When thrown flat, the turn will kick in early down the fairway, but it won’t be too dramatic. The turn will be there and then just holds it for most of the flight. We often talk about how if you can get a little turn out of a disc, it should translate to some added distance because of the added time aloft. The Convict needs that turn to carry the extra length.

As it continues down the fairway, once it starts to slow down the Convict will break back out of the turn and begin to fade back left. It isn’t the strongest fade, but will gain strength as it continues to slow down. Regardless of the strength, you will be able to rely on the Convict to finish left. At times we’ve seen discs hold that turn a little longer than expected and fades later than you’re wanting, but the Convict will have a fairly predictable finish.

We never saw any big skip finishes, but if kept low, you’ll get a little action on the ground. The strength of the fade is what you’re wanting when you know it will have a little turn and you’re wanting it to return back to the center of the fairway or a little left of center. It won’t take many throws to really get a feel for what the expected flight path should be.

Compared to the Felon, the Convict does have a little more glide, but it doesn’t quite reach the levels of the Escape. The Escape leans on the glide more for distance than the Convict will. Power is what the Convict will like the most and it is certainly setup for that. 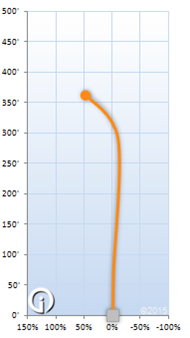 Dynamic Discs rates the Convict at 9, 4, -0.5, 3. Overall, we’d agree with those numbers, but could make a case for the turn rating to be around the -1 level instead. Stronger arms might see the slightly greater amount of turn, but the fade will still be there in the end.

The flight chart from inbounds Disc Golf shows a flight that is very close to what we saw. The turn is minimal, but helps gain some distance. The fade is strong enough to provide a consistent finish, but it won’t be too dramatic.

Another way to think of the Dynamic Discs Convict is like a shorter Dynamic Discs Trespass or Innova Destroyer. It has a similar flight pattern, but it will just be a little shorter.

The Convict’s turn is what you’re looking for from a flight like this. You’re obviously looking for some distance and a good strong throw should be rewarded. Give it just enough power and put some trust into the flight and you’ll be rewarded.

As a close cousin to the Escape and a great sidekick to the Felon, the Dynamic Discs Convict can be a workhorse in your bag.

Win your own Dynamic Discs Convict

Dynamic Discs sent us an extra Convict to give away and we’ll include the one we used in our testing as well! There are two easy ways to enter.

The @DynamicDiscs Convict is on the loose and @ATDiscGolf has the details! Enter to win your own! http://is.gd/ATDG_Convict #DiscGolf

We’ll take entries through 11:59 p.m. central time on Sunday, August 30. Winners will be announced on our Facebook page on Monday, August 31. Thanks to Dynamic Discs for the giveaway! Good luck!