You are at:Home»Reviews»Drivers»Dynamic Discs Breakout Review

Dynamic Discs is introducing a new “easy to throw” line of discs with lighter weights in the 150g class (weights 159g and lower) designed for beginners, younger disc golfers, and those with a slower arm speed. The first of these discs is the Dynamic Discs Breakout. The Breakout offers a slightly understable flight with just a nice hint of speed to wet the whistle of those wanting the feel of a driver without dipping into something too fast.

Dynamic Discs says this about the first release in their “easy to throw” line:

The Breakout is the slightly understable fairway driver from Dynamic Discs that you need when you have to have a bit more distance but you can’t sacrifice accuracy. It will hold an anhyzer angle without turning over all the way to the ground and will fly dead straight if you tell it to. Add this disc to your bag for your game to breakout of the same old shots and the same high scores.

Dynamic Discs sent us a Breakout for this review and it certainly lived up to it’s billing. Coming in with a Speed 8 rating, the Breakout fills that desire for a driver with a nice sized rim that even beginning players can get used to. We’re in the party that believes that high speed distance drivers, while they are fun to throw, aren’t the best option for people just starting out. It is easy to get frustrated with the flights when they don’t perform as you would have hoped. The Breakout though is fast enough to scratch that itch, while being slow enough to give you a lot of control.

For the average and below average arm speeds in our testing group who tried the Breakout, everyone was impressed with just how truly easy it was to throw the Breakout. The light weights certainly help with the distance. The one we were testing measured in at 159g. It should come as no surprise that throwing a lighter disc is easier than throwing a heavier one. Distances come easier and it is much easier to get up to speed. Even power arms found the Breakout to be a fun disc to get some really strong distance out of. The stronger arms were able to get the Speed 8 Breakout out to distances close to the Speed 11-12 range with ease.

Since it is easy to get the Breakout up to speed, you should see a consistent turn on every throw. It isn’t too flippy, but there will be a turn there all the time. It is another one of those discs that by controlling the hyzer release, you can help slow down that turn or even add to it. We had some really long hyzer flip shots with the Breakout and we also saw some big anhyzer lines thrown with ease.

The Breakout’s strongest performances were on shots where we were going for straight line distance. The turn will take it to the right of center on a steady basis before coming back at the end of the flight with a moderate finish. There wasn’t a high amount of energy in either direction, which helped produce a straight flight. We had a few holes that called for either straight line distance or we had a wide open fairway and we were allowed to just grip it and rip it. On virtually every attempt the Breakout would gain some unexpected distance thanks to the low weights and finish on a line just left of center.

The turn is a little less than the Breakout’s fade. At times we found them to be about equal, but the fade was always a hair harder. It won’t jump in that hard, but it always had just enough energy to keep it moving to the left. Slower arms will of course see a little less turn and a little more fade, but even then, it might be in the range of 0, 2 instead of -1, -1.5.

The glide is certainly there as well. we were able to keep some relatively low lines with the Breakout and the glide kept it moving down the fairway. It also came in handy for those shots where we powered the Breakout down a little bit. We let the disc do the work and just let the neutral flight take care of the rest. Never once did we find the Breakout to get a little out of control on us and fade out too early or turn and burn. It is a nice neutral flight. 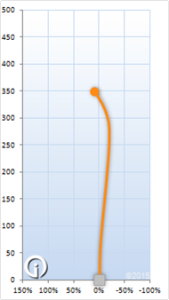 Dynamic Discs rates the Breakout at 8, 5, -1, 1.5. Overall, we’d agree with those ratings, but could make a case that the turn could be bumped up to -1.5 at times. Slower arms could see a little less turn and a hair more fade, but even then it wouldn’t be past a 0, 2 rating for turn and fade.

The flight chart from inbounds Disc Golf shows the straight type of flight we were seeing. The turn is surely there, and the fade is just strong enough bring it back past center.

Even while the Dynamic Discs Breakout is designed for beginners and slower arms, just about any disc golfer can find something to like out of the disc. It is effortless distance for more experienced players and a great way to step into fairway drivers for those who are just starting out in the sport. With weights only up to 159g, you can find the right weight for your arm speed and you’ll be throwing with more confidence in no time.