You are at:Home»DISCussion»DISCussion: More chains or fewer chains?

One of the most frustrating moments in disc golf is the spit out. You have a nice drive for a look at a birdie or a nice upshot to put yourself in a position to save par and then it all turns sour. You line up your putt, give it a solid release, only to see it spit right through the chains. We aren’t talking about the putts where you hit the far left or right side of the chains. These are the putts right through the heart of the target.

No one likes a chained out putt. We can all agree on that point. Where the masses tend to disagree is the solution to these missed putts. Some say you need to add chains to help catch the spit outs. Others believe this is part of the sport and adding chains could make putting “too easy” and catch too many putts.

After our DISCussion on the difficulty of disc golf courses a few weeks ago, we want to keep the conversation going, but in a new direction. Are more chains in disc golf baskets a good thing or should we limit the number of chains to help with difficulty?

The more chains, the better

At one point in time, disc golf baskets were simple. Take the DGA Mach III for example. While it has seen some upgrades over the years, it 24 chain design is widely used. The layout of the outer chains and inner chains became quite common. DGA also uses 24 chains, but in a slightly different layout, in their Mach V. Even their description mentions the idea of using the chain layout to help catch discs. Discraft also offers the 24 chain Chainstar with a similar layout to the Mach V.

Latitude 64 has their Pro Basket has 26 total chains in two layers of 13. They go with a slightly different mindset of removing a middle layer of chains to help the disc have some room to slow down.

A few years ago the popular Innova DISCatcher was upgraded to 28 chains in three layers (previous versions had 24).

Just in the last few months, we’ve seen the introduction of the new Professional Basket from Prodigy Disc. It brings 30 chains to each basket in two layers with the inner layer linked together with horizontal chains. The Arroyo Disc Sports Vortex also has 30 chains with their own interconnected set of chains. 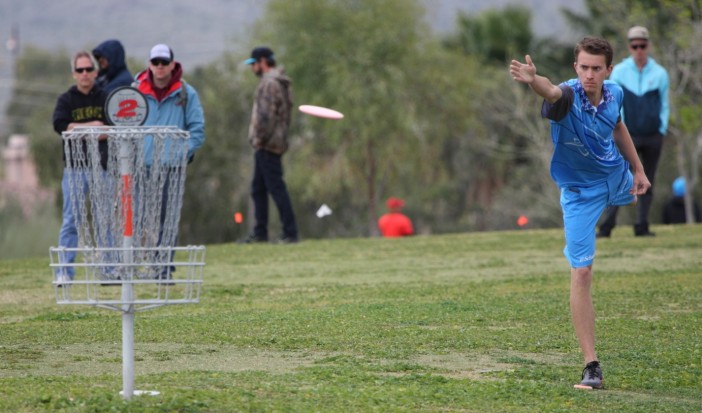 Finally, DGA took everything to a new level with 40 total chains in their new Mach X. The Mach X also features three rows of chains with the middle layer also connected in a X style layout.

All of these options obviously lean toward the “more chains the better” mentality. It is easy to think if a golfer can make more putts, the happier they likely are.

The other side of the argument says that more chains isn’t necessarily the answer. If baskets are designed to basically catch every putt it sees, then were is the reward in making the putt. Sure, chain outs happen even on putts that do just about everything right. What about those that aren’t the most accurate or come in too fast? Should those putts be rewarded as well?

You’ll often hear people talk about Gateway’s Bullseye basket. While it isn’t approved for PDGA tournament play, the Bullseye has just one narrow layer of 15 chains. Putts that would typically hit chains on the far left or right of any of the previously stated baskets wouldn’t even hit a thing.

This style basket puts a higher reward on accurate putts. It puts the pressure on you to aim at the pole and with the right velocity to make the putt. There aren’t any extra chains to help catch an errant putt or one with too much power behind it.

This might be the extreme solution, and the Bullseye basket is just one example of a simplified chain layout. In our opinion, it might be too simplified.

Now, we have to say that we’ve experienced a spit out or chain out on every type of basket we’ve played on. To us, it is just part of the sport. Bad putts have been saved by chains while good putts have just had bad luck. Is it frustrating? Of course it is. Is it better for the sport as a whole if nearly every putt is made? Does that help with competition? Do we lose the excitement of when a tough putt is made? To be fair, we’ve had spit outs on the more modern baskets too.

Let’s look at basketball for a moment. The size of the rim isn’t much larger than the ball itself. From youth leagues to the NBA we see shots hit the edge of the rim and bounce out or rattle around before a miss. This is all part of the sport. Sure, you could increase the size of the rim and the number of made baskets would increase and everyone would be happy. Right? Does that take away the reward of making a basket though? Just as in disc golf, something needs to separate the field in a tournament. It often comes down to accurate putting and if the basket itself takes away some of that competitiveness then what else can we do?

The best disc golfers should be able to perform regardless of the basket, but disc golf is one of the few sports to where the rules allow for slightly different targets to be used from event to event.

Let’s tie this all together. In our DISCussion about course difficulty we mainly focused on course length. Could you make a course harder without adding any distance by simplifying the baskets used?

Yes, making putts is a great feeling, but it doesn’t help with the competition factor at times. Instead of going to the 30-40 chain baskets, should the sport shift back to a simple 24 chain layout? Or, do we stick with the high chain count and go crazy?

What do you feel is the best solution? More chains? Fewer chains? Simple targets? Keep the DISCussion going!