You are at:Home»Reviews»Drivers»Discraft Crank Review

Shortly before the 2013 PDGA Amateur World Championships, Discraft announced a new high speed distance driver: the Discraft Crank. Discraft held a Test Drive event at Am Worlds that allowed disc golfers to try out the new high speed driver. At the time, not much was known about the Crank. After being released in the Am Worlds players pack, word is quickly spreading about the Crank. We got our hands on one of the Cranks released at Am Worlds and took it out to the course for a full review.

Discraft says this about the Crank:

Super fast! Crank hits the sweet spot: it’s the best disc a player can find for easier accuracy and big distance. Controllable for ams and pros alike, Crank has a narrower rim than other big drivers, so it fits more comfortably in your hand too.

During our tests we had disc golfers at a variety of skill levels try the Crank to see how it performed for them. Everyone had something good to say about the Crank and saw some pretty nice distance on their throws. The Crank has a rim width of 2.4 cm. In comparison, the Discraft Nuke has a 2.5 cm rim and the Discraft Force comes in at 2.3. In our tests, the golfers who didn’t like the super wide rimmed drivers said the Crank was comfortable enough in the hand to throw. Others who said they liked high speed drivers said the Crank felt very comfortable in their hand.

Even with the slightly smaller feel to the Crank’s rim, you certainly feel like the disc has some power. We were able to get a very strong, yet controllable, grip on the Crank in every one of our throws. Time and time again we saw very consistent releases which helped produce consistent flight paths.

When thrown with a flat release the Crank does have a very consistent, controllable turn to it. It doesn’t flip too fast, and won’t completely roll over, but it will slowly glide out to the right. When you give it a little hyzer on release, the Crank will flip up flat, and depending on the angle, track just a little to the right, before fading back to the left. After just a handful of throws the Crank’s turn felt very familiar to us and something we know we could trust throw after throw. Stronger arms were able to produce more turn than the weaker arms, but the weaker arms never felt like they didn’t have the ability to throw the Crank properly.

At the end of the flight, the Crank’s fade was never that hard. If given a flat release, the Crank would really only fade back to center on the line it was thrown. Don’t expect very big sweeping s-turn shots with the Crank. The lines we saw were much tighter. We look at this like a good thing though. If you need to hit a small window or a tight line the Crank will be able to keep a very straight and true path the entire flight. With a little hyzer flip and less turn to the right, the Crank was able to fade out little harder, but never hard enough to produce a big skip.

We were also able to try out the Crank on some anhyzer shots. When given a nice sweeping anhyzer line, the Crank would hold the angle for nearly the entire flight. The fade at the end was never quite strong enough to bring it all the way back out. At the very most the Crank would return flat, but hold the line it was currently on. 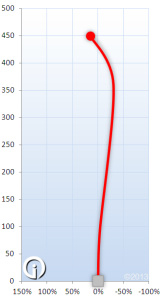 The Crank had a decent amount of glide, but nothing that seemed extraordinary. It didn’t have the same as the Innova Tern, but did seem to have a little more than a Nuke.

Discraft rates the Crank on their stability scale at 1.3. When all was said and done, this seemed pretty spot on. On the Innova flight scale, we’d rate the Crank at 12, 5, -1.5 to -2, 1.5. Stronger arms were able to push a little more turn out of it, but everyone agreed that the Crank can push out some very controllable distance.

Looking at the flight chart from inbounds Disc Golf you’ll see a flight nearly identical to what we experienced. A controllable turn before a fade that brings the disc back to center.

In comparison, the Crank felt like a beat up Discraft Force. It lacked the glide of the Force and clearly didn’t have the strong fade, but the flight would compliment a Force quite well. If you’re an Innova thrower, you could also compare the Crank to a beat in Star Destroyer. You also won’t quite get the glide that the Tern has, but you will get some nice distance. If Discraft is going for controllable, straight line distance, then they have done it quite well. Don’t be surprised to see the Crank catch some CTPs on some long holes on your local course sometime soon.

The Crank is now available at disc golf retailers everywhere.