You are at:Home»Reviews»Midranges»Discraft Buzzz OS Review

At the 2014 PDGA Amateur World Championships, Discraft released the brand new Discraft Buzzz OS. Without a hint of a new release, the first disc golfers heard of the Buzzz OS was when disc golfers picked up their players packs and saw this gem inside. Discraft doesn’t release many new discs each year. They tend to wait until they have the right flight and right characteristics they were looking for and then the pull the trigger. After last year’s release of the popular Crank, and now the Buzzz OS, Discraft’s model of these limited releases appears to be working. If you’ve ever wanted an overstable Buzzz from Discraft and didn’t think the Wasp or Hornet filled what you were looking for, the Buzzz OS is, without a doubt, the answer.

Discraft says this about their new overstable midrange:

The perfect complement to your Buzzz. When you’re facing a headwind, need a straight shot with a hard finish, or want to use a forehand throw, Buzzz OS delivers success. Plus it’s beadless; it feels like a Buzzz in your hand, lending a familiar confidence that comes with the Buzzz family of discs.

We can agree with much of what Discraft has said about the Buzzz OS. It feels like and looks like a Buzzz, but flies with  much more stability. When you hear of an overstable midrange like the Buzzz OS, there is a very specific flight you’re looking for. You want a lot of stability at high speeds and a lot of resistance to turn. You’re wanting a strong enough fade to consistently finish to the left, but also something you can control. After our tests, we can easily say the Buzzz OS accomplishes all of those features.

Nearly any disc golfer knows about the Discraft Buzzz. Flies true, straight, and predictable. If you ask some, they say its the most popular disc available. When something is so popular it can be hard to make changes to it and produce an equally as loved disc. If you’ve always liked the feel of the Buzzz, it will be extremely easy to warm up to the Buzzz OS. When it was first announced, many figured the disc they were describing was the Wasp. The Wasp is beaded while the Buzzz OS takes on the beadless style of the Buzzz. If that bead never agreed with you, have no worry when it comes to the Buzzz OS.

The speed and glide of the Buzzz OS is virtually identical to the original Buzzz. It’s a nice combination of speed and glide that many have come to love. It doesn’t drop out of the sky, but it won’t glide out too much on you either. You could say that it leans more on speed and power than the glide to help it down the fairway. Reach back and let one rip as hard as you can and the Buzzz OS will do the rest.

Like we said, when you hear of an overstable midrange, you want it to resist turn and fly very stable at high speeds. The Buzzz OS does exactly that, but it isn’t overwhelming. The Buzzz OS would remain on the initial line we put it on for the majority of the flight. If we kept it flat, it would remain flat without any hint of turn. When we gave the Buzzz OS a little hyzer it would hold that angle for the entire flight. This proved very useful on any shorter little hyzer shot. By giving it some help on release, it would fly on this tight little sweeping shot. If we were wanting a little more distance, we’d flatten things out and let the disc fly on its own.

The fade of the Buzzz OS was certainly there, and is strong, but isn’t mind blowing. The more hyzer you give the Buzzz OS the stronger the fade will be. On a typical flat shot, it will fade, but won’t knife that hard. Some discs like the Discraft Drone, Innova Gator, or even the Hornet for that matter, will have a slightly stronger fade. This fade was very similar to the Wasp or an Innova Roc. It’s worth noting that the Dynamic Disc Verdict, the overstable compliment to the Truth, has a little more fade than the Buzzz OS, but they are similar.

If you’re a Buzzz thrower, you’ve likely found yourself standing on the teepad holding a Buzzz in your hand only to be facing a headwind. You know the Buzzz is typically the right disc to throw here, but it won’t be stable enough due to the wind. The Buzzz OS is now the disc you’ll reach for. It will be stable and finish very predictably into the wind. 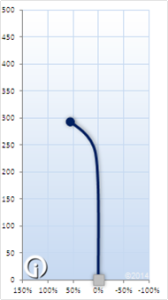 Overall, we’d rate the Discraft Buzzz OS at 5, 4, 0, 3. You’ll get the same combination of speed and glide of the Buzzz, but a much more stable flight with a lot of resistance to turn and a nice strong fade at the end.

The flight chart from inbounds Disc Golf shows a flight very similar to what we were experiencing. The very stable flight at the start is followed by a strong, but not overwhelming fade.

If you’re a fan of the Buzzz SS for your understable compliment to the Buzzz, you should like the Buzzz OS as an overstable compliment. It has the same feel in the hand that you know and love, but a much more stable flight. If you’ve wanted a beadless Wasp with a nice stable flight, the Buzzz OS will do it. Don’t worry about it knocking a Drone out of your bag. Even though this is a brand new disc, we won’t be surprised to see this in many disc golf bags, especially if you’re a Discraft lover. The Buzzz OS is a great addition to the Buzzz family.