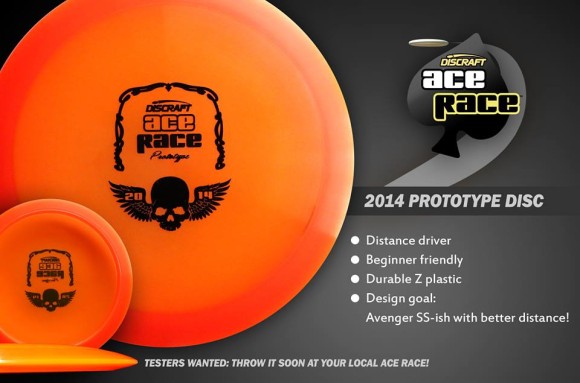 The wait is over! Discraft took to their Facebook page to announce the prototype disc that will be used for the upcoming 2014 Ace Race. As the photo above states, this year’s disc will be in their Z plastic and should be a beginner friendly distance driver.

Based on their description of an “Avenger SS-ish with better distance,” we’d expect a pretty understable disc with a lot of gilde and maybe a touch of fade. We took to the inbounds Disc Golf flight charts to see what this disc could possibly be. Any fan of Discraft could consider the Nuke SS a longer Avenger SS. If they want to keep the rim size down we’d expect something to land in between the Nuke SS and Avenger SS. After some trial and error, we came up with the following trio below. 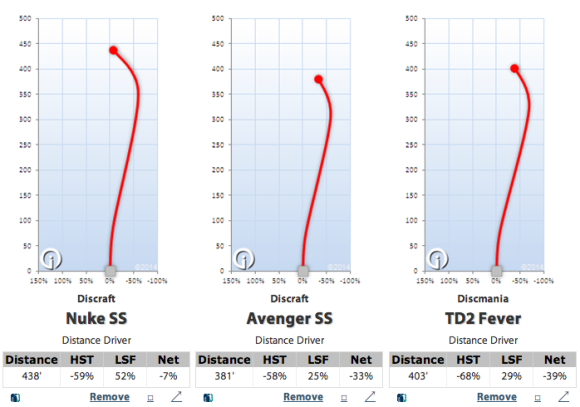 While this is no guarantee of what it could possibly be, it is an educated guess. The Discmania TD2 falls right in between both of these discs with similar flight characteristics. As a pure guess on what the flight numbers could be, we’d say 9 to 10, 5, -3 to -4, 1 to 2. Again, this is pure speculation.

In our review of last year’s Ace Race disc, the Mantis, we noted how the speed was a little fast for an Ace Race which is typically setup in shorter holes. The understable/beginner friendly flight that is described by Discraft should translate to a little more control, but we are a little concerned that this disc would again be too fast. Only time will tell.

At the time of this writing, nearly 250 Ace Races are registered to take place this fall. Learn how you can be a part of one at DiscGolfAceRace.com.