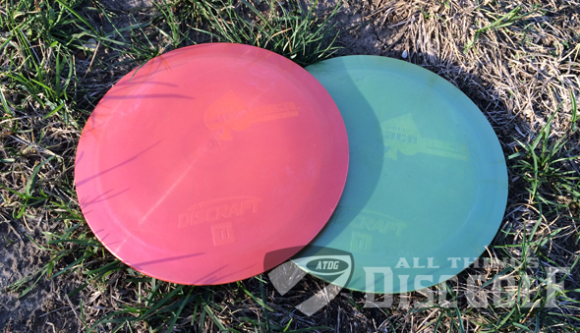 December 2, 2013 UPDATE: The 2013 Ace Race disc has been named the Mantis by Discraft and is PDGA approved.

Discraft decided to speed things up for this year’s Ace Race. Previous Ace Race discs have usually been a putter or a midrange. The 2013 Ace Race disc is a true fairway driver with a very controllable flight.

We were anxious to get our hands on this year’s Ace Race disc after seeing some of the initial feedback. In our minds, this year’s disc wasn’t the best choice for an Ace Race because of the disc’s speed. On very short holes, the 2013 Ace Race disc seemed to be too much disc. We aren’t focusing on our review on the disc’s performance during the Ace Race. We’ll focus on how the disc does in a real disc golf environment on full length holes.

On our first throw and full speed, we couldn’t help but realize Discraft has produced a disc that disc golfers will enjoy. The rim on this year’s disc is right around the Speed 7 category. Disc golfers from beginners to professionals will find the feel to be very comfortable. You can really get a strong grip on the disc which leads to a lot of control. Every rip we had with the disc saw it come out of the hand very easily.

As the disc would get up to speed, it would show just a little bit of high speed turn. It is still relatively stable to allow a very straight flight. If we released it on a little hyzer angle, it would flip up flat and start to glide down the fairway. On a flat release we saw enough turn to make it track slightly to the right, but it would never fully roll over.

We also took it out on a few holes that called for a sweeping hyzer shot that needed some extra height. When thrown on a big hyzer angle, it would flip up just a little bit, but continue to hold the hyzer line the entire flight. We saw very consistent results from start to finish on big hyzer throws. When we gave it a little anhyzer, it would hold the anhyzer line at the front before fading back out to the left. If we needed the 2013 Ace Race disc to do something, it was very easy to make it happen.

As for the end of the flight, this year’s Ace Race disc had a very predictable, moderate fade. It was strong enough to fight out of a slight anhyzer line, but not quite strong enough to produce big right to left movements. Don’t expect many big skips or very hard penetrating fades. It just ins’t that type of disc. Regardless, we felt like we could always rely on the disc to head to the left at the end of a flight on every single throw in a very consistent matter. If you’re facing a headwind, this year’s Ace Race disc probably shouldn’t be your first choice.

We have to say, this disc flies very similar to a slightly beat in Innova Teebird. The distances we saw and the lines it flew on were very similar. Expect to see a little high speed turn followed by a moderate fade at the end of the flight. As of this writing, the 2013 Ace Race disc doesn’t have a name yet and it is not yet PDGA approved.