You are at:Home»Reviews»Drivers»Discmania TD2 Review

The ability to effortlessly have a disc turnover and head to the right can be one of the most useful shots in disc golf. Sure, some have the ability to use a flick to accomplish this goal, but for others, they stick to only the backhand style of throwing. In a previous review we stated just how controllable the Discmania TD can be. If you’ve ever wanted just a little more turn out of the TD, and maybe a hint more distance, the Discmania TD2 is what you’re looking for.

Discmania has this to say about their understable TD2:

The TD – Rush, well known as one of the most versatile drivers in the game, gets reinvented in the form of TD2. This driver is best suited for anyone seeking to get more distance with less effort. The Fever is by far the most understable disc in the Discmania line-up with it’s high speed turn value of -4. Packed with a great glide, this disc is easy to throw far with a little effort. Awesome for rollers and long turning shots for intermediate to pro players. Available in very durable and grippy S-line plastic in weights ranging from 165 to 175 grams.

Discmania sent us a pair of TD2s with one at the max 175g and the other at 167g. The 167g TD2 had a slightly larger dome and was maybe a hair less stable than the max weight versions, but in the end the flights were very similar.

For strong armed throwers, the TD2 might just be a little too understable. On full power throws for those who have 400+ foot power, the TD2 would really roll hard and be a roller almost right away. Don’t take that as a negative though. It was easily one of the easiest discs to get on the ground quickly and allow it to do the work and just roll on down the fairway. It can hit at a pretty sharp angle and still have the ability to stand up and get moving.

For anyone with 325-375 foot power, or if a power thrower takes a little effort off the throw, the TD2 will have quite of bit of action in the air. We’d start the TD2 on a line down the heart of the fairway and watch it quickly get into a left to right turn. The TD2 wouldn’t roll that hard and hit into a roller for a disc golfer in this power range, but it will get moving pretty quickly. Once it got up to speed the TD2 would actually hold this angle for most of the flight and continue to track to the right. The amount of movement we saw from the TD2 was quite high and among the highest we’ve seen from a disc. There is little doubt that the TD2 is understable when you see the flight.

What is the most interesting part of the TD2s flight is how it finishes this turn. As you watch the disc fly away from you, you’ll see the left edge of the disc, which was raised due to the understable flight pattern, will start to flatten back out. It never really came back around and actually had a fade, but it had just enough power to flatten back out. This created a very unique flight. The TD2 will turn, hold that angle before flattening back out, but continues to push forward while still moving left to right. The best way to describe it is actually a reverse fade. If you’ve ever seen a “forward fade” where the disc continues to push down the fairway, but moves to the left at the same time, take a mirror image of that and you’d see how the TD2 finishes. There might be a hint of actual movement to the left at the every end, but it is minimal.

There are a few holes at local courses where a shot like this is desired. We typically see many go or the flick shot on these holes, but being able to throw the TD2 was equally as accurate and accomplished the same goal. We’d adjust the amount of hyzer on release to help determine just how much turn we were needing and let the TD2 do the work itself. Throw it hard and strong and watch the TD2 float over to the right, hold that line, and finish well left of the center line.

While the TD2 has a decent amount of glide which helps with carrying it down the fairway, it is very shallow and doesn’t have a lot of room to grip on the wing. The wing width isn’t the problem, but the depth of the disc is cause for concern for anyone with really big hands and/or fingers. We almost had to use a power/fan hybrid type grip to really feel like we were in control of the TD2. If you don’t like a really shallow disc, the TD2 might not be the answer for you. 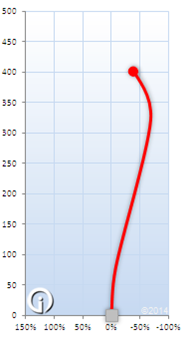 Overall, we’d agree with Discmania’s ratings and rate the Discmania TD2 at 10, 5, -4, 1. There is little doubt it is understable, yet can be a very useful disc for any skill level.

The flight chart from inbounds Disc Golf illustrates this understable flight we were seeing. The turn kicks in pretty early, remains on that line, and then flattens out at the end. Not much fade at all, but a true left to right flight.

The Discmania TD2 is in the category of a disc that ultimately does very few things on the course, but what it is capable of, it does quite well. Power throwers will see the TD2 be quite the roller and can really produce some easy roller shots. If you don’t have quite the power to get the TD2 to roll over without some help, you will see the TD2 be a very useful disc for those big turnover shots when you need it to move from the left to the right on a consistent basis. The lack of stability in the TD2 shouldn’t come as a shock to you, but once you get a feel for the flight, it can be quite the disc of choice.