You are at:Home»Reviews»Drivers»Discmania TD Review 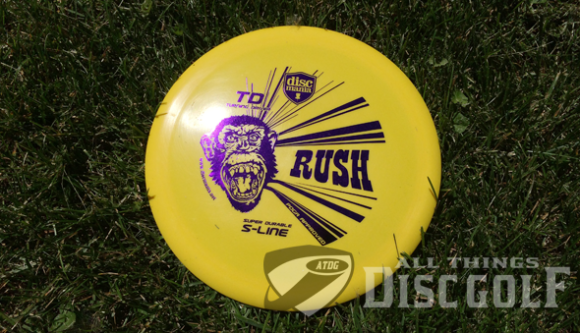 For beginners to experienced disc golfers one of the most difficult shots to execute is the straight as can be long distance drive. Midranges and even some fairway drivers can pull off this shot thanks to their slower speeds which translate to more control. When you need that added distance it is hard to find a combination of speed and control for the shot you want. Often times you have to sacrifice one for the other. When it comes to the Discmania TD, one could argue you get a near perfect combination of speed and control to allow some of the straightest flights you’ve seen.

Discmania says this about their Speed 10 TD also known as the Rush:

The TD is an easy-to-throw disc suitable from beginners to top level pros. This speed 10 driver has a comfortable smaller rim grip that offers a lot of glide with a very straight flight path. If you’re looking for a disc that flies faster than Innova’s Roadrunner but still offers some of the best glide the Turning Driver is your choice! The main difference between the Roadrunner and Rush is that you do not need to flex this disc in order to make use of the big glide that it offers. When thrown with the right amount of force, this disc just keeps on going straight – almost like floating in the air!

Discmania sent us a pair of TDs to review: one was 175g and one was 167g. Overall, we saw very little difference between the two. If anything, the lighter weight had a little less fade on it.

Being a Speed 10 driver, the TD fits easily in the hand as opposed to some other high speed drivers. It isn’t a very deep disc and when combined a slight dome, the TD really fills out your grip. The bottom wing is almost convex and provides a lot of surface area to help that slightly understable flight.

The flight of the TD can be easily controlled regardless of your arm speed. In our tests, if you have a strong arm and want the straightest shots possible, the more hyzer you’ll need on release. If you have a strong arm and release the TD flat, expect it to ride into a turn from left to right and finish to the right of the initial line of release. For weaker arms, straighter flights can easily be achieved with less hyzer. All you need to do is find the right combination of hyzer angle and arm strength that works for you and your results should be exactly what you’re looking for.

As we stated, if you want to achieve that slight turnover and send the TD to the right side of the fairway, you won’t need to help it much at all. A nice flat release and a strong throw will do the trick. This will result in a very controllable and smooth turnover shot. The more you trust the disc, the better your results will be. Even the weakest arms in our test group were able to get some movement on the TD but the end result was closer to the center line off the tee.

While the TD will certainly come in handy on any open drive where you need some straight distance, where it might be the most effective is on the tighter wooded holes or holes with low ceilings. On a full power shot, give it a little hyzer and go right at the window you’re wanting to hit. You’ll see the TD flip up flat and glide on a very straight plane. Because of the understable flight, you can also take a little power off of the TD, give it more of a flat release and expect another very straight flight. The key is finding the right combination of release angle and power and the TD will perform for you.

During our test session we were faced with a moderate headwind and wanted to see how the TD could perform with its natural understable flight. Well, needless to say, if you throw it flat, it will flip over quickly and start to head to the right. That doesn’t mean it isn’t useful in the wind though. We reached back, gave it a very strong throw into the wind with a little hyzer. It flipped up flat, tracked to the right just a hair and then had a very soft fade. The disc finished virtually a foot off of our initial line. The glide helped it remain aloft while the hyzer release helped it fight through the wind. It was one of the straightest shots we’ve seen with a Speed 10 driver. 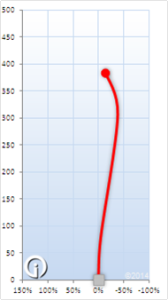 Overall, we’d agree with Discmania’s flight ratings and also rate the the Discmania TD at 10, 5, -2, 1. The combination of turn and fade allows for a very controllable flight while the above average glide helps it carry down the fairway. As we’ve said a few times, the key is finding the combination of release angle and arm speed and the TD could become a staple in your bag.

The flight chart from inbounds Disc Golf shows a flight that is similar to what we experienced when we threw the TD with a flat release. The TD will kick into the turn early, hold that angle, before finishing with just a touch of fade.

Save at the Discmania Store

Discmania wanted to pass along some savings to you! The first 50 people to use the promo code all-things-dg-1 at the Discmania Store will receive 10% off. Don’t hesitate though! Once it has been used 50 times, this offer will disappear.