You are at:Home»Reviews»Drivers»Discmania PD2 Review

There are some discs that are in a class of their own. They not only require a strong arm to really make it perform, they crave the power. These discs are fast. They have no turn and a good amount of fade that can be tough to harness. If you’re capable of throwing one of these discs, you can certainly reach another level. One of these discs is the Discmania PD2. The PD2 isn’t the oldest disc in Discmania’s line up, but it certainly is the most stable.

Discmania has this to say about their beefy driver:

Let’s face it – the PD2 Chaos is not meant for everyone. Picture Innova’s Xcaliber with a little more speed and stability and you’ll know what this disc is like. It is abnormally fast for the stability it offers. Targeted for the strong-armed touring pro, this disc is very reliable thrown backhand, forehand and overhead in pretty much all conditions. Available in multiple plastic blends to suit different tastes. Do you think you have what it takes to throw this disc?

Discmania sent us a pair of C-Line PD2s to test. One came in at the max 175g and the other at 168g. For a short time, the PD2 wasn’t molded in C-Line due to getting it to mold up correctly and in legal weights. These PD2s have microbubbles in the center of the wing to help take some weight out of it. If we handed you this disc with your eyes closed, you’d never guess it had the bubbles in there. You don’t feel them, they just help bring down the weights.

Discmania nearly nails it on the head when they say the PD2 isn’t for everyone. If you can’t throw 300-350 feet, the PD2 just isn’t your disc, especially in max weight. With a wide rim and a lot of resistance to turn, the PD2 needs power to fly far. If you don’t get it up to speed right away, you won’t have a very good time. If you are able to give it a strong rip, the PD2 will be a treat. Even the arms who can reach 500 feet with a throw won’t be able to get the PD2 to turn. Do not hesitate with the PD2… just let it rip.

The overall flight of the PD2 is very predictable and very consistent. After you throw it a few times you can nearly predict when the fade will begin and when it really starts to get hard. On many throws we were able to see it start to track to the left and then really dump hard. The PD2 certainly isn’t the straightest disc on the market, and it doesn’t want to be, but it is pretty accurate once you learn how it wants to fly.

If you’re facing a headwind, you’ll never second guess the PD2. The combination of the lack of turn and strong fade will make it a great choice when you need something to hold up in the wind. It is very easy to adjust your initial line based on the wind you are facing and still get an accurate shot with the PD2. During our tests we had a pretty steady left to right wind and we could easily trust the PD2 to fight that turn at the start and then fade directly into the wind. Sure, the wind tempered down the strength of the fade, but that is exactly what you’re looking for.

When we first picked up the 168g PD2 we were expecting a flight that might be a little less stable just due to the weight. Often, lighter drivers are a little more sensitive in the wind. In the terms of the PD2, the flight patterns were virtually identical. The only difference was the slightly longer distances we were gaining due to the lighter weight being a little easier to throw.

The 168g PD2 when thrown into a headwind showed virtually no turn and was still very stable. We were certainly not expecting this, but it was a pleasant surprise. Even the strongest arms in our testing group were loving the lighter PD2. They could throw it the same way as the max weight version and still achieve the same results. It still holds the initial line you release it on and it still fades, but it bombs. 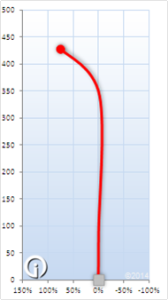 If you’ve tried a max weight PD2 and thought it wasn’t for you, you  might want to look at a lighter weight. We might not recommend dropping down in weight too much, but something in the 165-168g range might be worth a shot.

Overall, we’d agree with Discmania’s numbers and rate the PD2 at 12, 4, 0, 4. It is without a doubt a high speed stable driver that loves some power. You won’t see a lot of glide, but you will see plenty of speed and a disc that resists turn.

The flight chart from inbounds Disc Golf shows a flight very similar to what we saw. You’ll get a very straight flight to start things out before kicking into a pretty strong fade at the end.

As we stated at the beginning, the Discmania PD2 is a disc that loves power. It wants to see just how hard you can throw it and it wants to be challenged. If you have a headwind, need a big skip finish, or want to flex out a big s-curve style shot, the PD2 wants you to trust it to carry out exactly what you’re looking for.