You are at:Home»Reviews»Drivers»Discmania PD Review

Every so often a new disc is released that ultimately changes the game. This disc becomes what others quickly compare everything else to. You’ll often hear the phrase “It’s like a Destroyer” or “It flies like a more stable Buzzz.” These discs become almost a benchmark from that point on. One of these discs is the Discmania PD.

When it was first released it quickly turned heads and became a disc that quickly made disc golf bags around the world. Disc golfers loved the very stable flight that with the combination of speed and glide produced very controllable distance in a flight pattern that has not been seen until that point. Since the release it seems as if each run, especially in C-Line, has produced something slightly different, but still something that clearly in the PD family. The latest run introduces a new plastic to the PD: G-Line. Akin to the Innova’s popular GStar plastic, the G-Line PD is produced in a very pearly, softer blend of S-Line type plastic that provides great grip and glide.

After that introduction, this is what Discmania has to say about the PD:

The PD is a fast and stable Power Driver driver which is very resistant to the wind. The PD has a good glide and it’s useful for sidearms, stable power shots, and long flex shots for experienced players. This disc offers longer and straighter shots with a reliable low speed fade. If you’re hesitant to try the Power Driver, ask anyone who’s tried it – this disc is a true crowd favorite.

Discmania sent us a pair G-Line PD to test. One weighed in at 175g and one was 167g. Both flew on very similar lines and were quite consistent. After the release of Innova’s GStar and how it has quickly gained popularity on disc golf courses everywhere, one of the most requested discs in this new plastic blend was Discmania’s PD. Well, the wait is over and it was well worth it. But, let’s tackle the real question: how does it compare to it’s C-Line and S-Line cousins?

To make this a complete review, we need to talk about the flight of the PD in general. The 1.9cm rim slots the PD ahead of your typical fairway driver, but isn’t as fast as other distance drivers. The Speed 10 PD is fast enough to give even beginner players some added distance, but the lack of a really wide rim provides a very comfortable grip. There is little there to intimidate you. Power throwers can really put a power grip on it while beginners will be able to find comfort in a rim slightly wider than what they might be used to.

The flight of the PD itself is really what makes it stand apart from others. At high speeds you won’t see much turn at all. It will be very stable for you in most plastic blends. Discmania says the fourth run of the C-Line PDs have a touch of turn. We do have one of these in our collection and it does have a slight amount of turn, but it isn’t much. Most of the other runs of the PD, especially the early run S-Lines and the Jolly Launcher PDs don’t have a lot of turn at all. Find your window you want to hit and trust that the PD will go where you throw it. It won’t venture off your intended line at all.

The end of the flight is also a popular feature of the PD. It is strong, but not overbearing. It will certainly finish to the left, but it isn’t going to knife in very hard. We’d have to agree with Discmania’s rating for fade at a 3. It doesn’t do anything that special, but it does it consistently.

The distances you’ll get out of the PD will easily slot in between what you can get out of a Teebird and a Destroyer for example. The speed and glide combination allows for that added distance you’re looking for if you are maxing out a fairway driver. It is clear why so many pros will reach for a PD when they need a very stable flight, but still need to keep it controlled.

Now to how the G-Line PD performs. We know it is cliche, but a “longer Teebird” might be the best way to describe the G-Line PD. We know. It is over used, but let us explain. Your typical C-Line or S-Line PD tends to have more fade than a Teebird and a little less glide. While it still carries a very straight flight that is reminiscent of a Teebird, there are some differences. In the case of the G-Line PD, you’ll find a little less fade and a little more glide. After a few more test throws one of the members from our testing team mentioned that it flies like a Teebird, but just longer. This quickly became apparent with the flight we were seeing.

The G-Line PD still holds a very stable line when first thrown. It will resist a mild headwind and fly on a very straight line. About midway through the flight you can see the glide really kick in. It isn’t a great deal more when compared to the S- or C-Lines, but you can tell you’re getting a little more glide out of the G-Line.

At the end of the flight, it will still fade to the left reliably, but it won’t do it as hard as a S- or C-Line. This has led to much straighter flights and even a little more control in the G-Line version. If you’re a fan of the PD, but you wanted a little more glide and a touch less fade…you’ll want a G-Line PD. 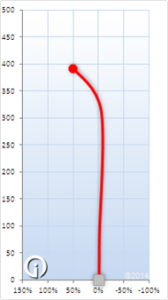 Overall, we’d agree with Discmania’s flight ratings for the PD and also give it 10, 4, 0, 3. For the G-Line PD, we’d bump that to 10, 4.5, 0, 2. The combination of speed, glide and stability creates a very controllable distance driver that can help you push past distances with fairway drivers, but won’t fly quite as far as the fastest discs on the market.

The flight chart from inbounds Disc Golf shows a very familiar flight path from the PD. While still very stable, the strongest arms might get a little turn out of it, but don’t expect much.

Like we stated at the beginning of this review, there really isn’t anything on the market like a Discmania PD. It is in a world all by itself. The S- and C-Line PDs have helped make the PD become the fan favorite that it is today. The addition of the G-Line PD only makes that lineup even stronger. Expect a flight with slightly more glide and a touch less fade in the G-Line version of this popular flier. Regardless of which plastic you choose, you can’t go wrong.