You are at:Home»Reviews»Putters»Discmania P3 Review

Earlier this summer Discmania released the third putter in their lineup. The Discmania P3 is a very stable putter that fits somewhere between a long putter and short midrange.

Discmania says this about the P3:

It is a stable disc with predictable fade at the end. It´s a hybrid between the putter and mid-range – you make the call! The P3’s best weapon is it’s versatility – it’s an awesome flyer off the tee and a great tool for putting too. For the fans of fade-in putters out there this disc is a must try.

We were anxious to try the P3 when we first saw the flight numbers from Discmania. Discmania put the P3 at 3, 2, 0, 3. We were expecting a flight with very little glide combined with a decent fade at the end. In reality, we experienced a very stable putter with great glide and control with a small fade.

The C-Line P3 we used for this review does have a small amount of dome. The added dome seemed to actually help the P3 during its flight. When you first grab the P3 you’ll notice a pretty meaty rim with plenty of room to grip. The P3’s small diameter allows you to really get a comfortable and controllable grip. We always felt in control of the P3 in our tests.

The thing that surprised us the most about the P3 (a good surprise) was just how stable it was at high speeds. We could really lay into the P3 and it wouldn’t flip over. Throw after throw we would see a very straight flight. If we needed it to hold a little hyzer line, it would. If we gave it a little anhyzer, it would quickly flex back out.

Into a headwind the P3 would fly for us like an Innova Aviar without a headwind. We had some approach shots into a pretty stiff headwind and we could throw right at the basket and expect a very straight flight directly at it.

Now, while it was very stable at high speeds, the P3 never showed a very big fade for us. It would remain stable, but would never want to skip to the left that hard. This took some getting used to at first, but once we figured out it became a very nice feature of the disc. The flight was much straighter than we expected.

Because of the added speed of the P3, we didn’t spend a lot of time with it as a true putter. Where it really shined was as an approach disc. Because we knew it would be stable at high speeds, we could rely on it to hold tight lines and hit small gaps. 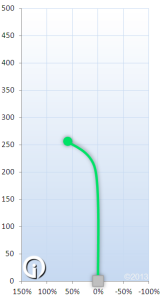 To compare, the P3 flew like a faster Rhyno with more glide. From off the tee to on the approach the Discmania P3 proved to be a great solution in that in between slot. The P3 is a fast putter with great glide or a slow midrange. Regardless of how you say it, the P3 has great control. It will hold a hyzer, flex out of an anhyzer and hold a straight line shot on a frozen rope.

Discmania has now released their P3 in Glow C-Line plastic and sent us one with the First Run stamp to check out to see how it can compare to the stock version. The feel and overall experience of the Glow C-Line P3 is quite similar to the normal C-Line P3, but it might be a hint more overstable.

We rated the P3 before at 3, 3.5, 0, 2.5 and feel comfortable enough to bump up that fade to a 3 in for the Glow C-Line P3. We saw a slightly harder fade. It is still nice and stable at high speeds, but just finish with a little more punch to it. We said previously how it didn’t have that strong of a fade. Well, now it does.

It still slots right in between a putter and a midrange for us and you get a lot of versatility in the Glow C-Line P3. It is more of a utility disc than a true putter inside the circle, but even some in our testing group loved how stable it was and could hit some nice putts with confidence due to the fact you know it will fade at the end and crash into the chains.

You can pick up a Glow C-Line P3 today in the Discmania online store.