You are at:Home»Reviews»Putters»Discmania P2 Review 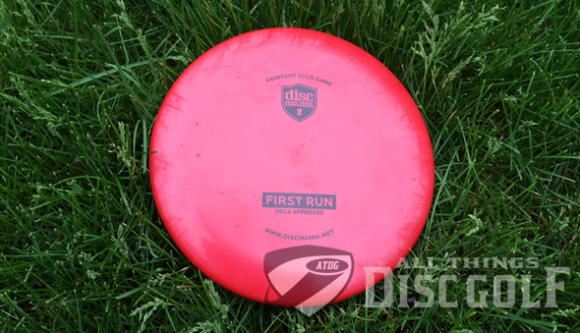 After being released in 2010 the Discmania P2 quickly gained popularity due to the very stable flight and control it provided. One professional who is a big fan of the P2 is two time world champion Paul McBeth. McBeth has his own signature series P2 in which you’ll see him reach for often on shorter drives and approach shots where he needs the added stability. Just recently, Discmania released the P2 in their new G-Line plastic last week and after some time with it, we can clearly see why McBeth and other top pros reach for the P2.

Discmania sent us a pair of G-Line P2s to review and our first rounds with them quickly turned into one of the most unique testing situations we’ve had. We brought the G-Line P2 with us to a tournament this past weekend and planned on testing them out after the second round back at our home course where we do most of our testing. We were one of the first cards to get turned in after round one which meant we had some added time before the start of the second round. After some lunch we decided to grab the P2 and head back out to the course and start throwing. Little did we know that after just a few throws we would quickly realize why the P2 was such a favorite disc from folks like Paul McBeth. After just three or four holes it was decided that these would actually be in the bag for round two after sitting in the car for the first 18 holes.

After the second round, those who threw the P2 with us that afternoon were wanting one in their bag as well. It made that strong of an impression.

The P2 does feel a little deep in the hand. If you prefer a shallow putter, the P2 might be a little hard to get used to. The depth does provide the chance a very comfortable fan grip which can lead to a lot of control either off the tee or on approach shots. The G-Line plastic gives the flight plate a lot of flexibility and allows you to really dig your thumb into it. The added flexibility was nice off the tee when we really needed to get into a disc and needed as much snap as we could get.

When you hear people talking about the P2, you’ll often hear about how stable it is at high speeds. What you’re hearing is a fact. The P2 will resist turn and fly as straight as you would want it to. The P2 is one of the most stable putters we’ve thrown – especially off the tee. The G-Line P2 was really able to hold the initial line time and time again. If we would try and force it on little anhyzer it would quickly roll back to flat and fly straight. Because the P2 doesn’t have a very strong fade, it would almost look like it would correct itself out of that turn and force itself to fly straight. If you wanted to throw a big anhyzer with the P2, you better really try and force it over because the P2 won’t help your cause.

Now, with how stable the P2 is at high speeds, the P2 doesn’t have a large amount of fade. This results in a very straight flight that can be one of the toughest things to accomplish on the disc golf course. You want that stability at high speeds which allows you to really trust that a disc will fly on the line you put it on, but you want it to settle down softly and not fade out too hard. When we first took our G-Line P2 out it was actually a little more stable than we expected. While Discmania rates the P2’s fade at only a 1, we were finding throws that were more along the lines of a 2 or even 2.25. It certainly had a little more fade than it’s S-Line counterpart. After some time with it though, some of that fade has fallen out of it and has slowed to around a 1.5-1.75. Even now it is more than a 1. With all that said, there is still a lot of control in the P2’s fade. You know that it will finish slightly to the left, but it will do so with ease.

When we moved inside the circle, we found the P2 to be very straight and very stable. You won’t have to worry about the P2 flipping up on you or wanting to turn at all on those longer putts. You can really aim right at the chains and know that as long as you do your part, it will hit the line you intend. The deeper feel might turn some off when it comes to actually using the P2 as a putter, but for those who are spin putters, it should translate nicely.

The P2 doesn’t have a bead on the bottom of it either. The lack of a bead does help it come out of the hand clean on drives. For a beadless putter, it is impressive with how stable it is. 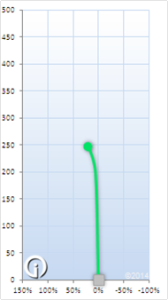 Overall, we’d rate the Discmania P2 at 2, 3, 0, 1.75-2. The amount of fade in our G-Line was a little stronger than what we’ve seen in our S-Line, but even after a few rounds with it, we’ve seen the fade decrease slightly. While across the board we’d average the glide to be a 3, the G-Line might have just a touch more.

The flight chart from inbounds Disc Golf shows the flight we were experiencing when thrown off the tee. You’ll get a very stable shot at high speeds followed by just enough fade to make you notice it. The G-Line’s glide was a touch more than our S-Line.

If you’ve never thrown a Discmania P2 and have heard the hype behind it, you might have wondered if all the hype was true. After our tests, we can say that it does live up to the hype. Especially in the G-Line plastic, the P2 is one heck of a putter. While some might have a hard time with it inside the circle, there is a lot to love when it comes to the P2 off the tee or on approach shots. With a great deal of stability at high speeds and just a hint of it at low speeds, the P2 is one of the straightest putters on the market. It will quickly fight out of a turn and with a decent amount of glide, it will carry down the fairway on a very straight path.

While it was already available in Discmania’s D-, P-, and S-Lines the G-Line P2 is a very nice addition to that lineup. If world champions choose the P2 for their bag, it is hard to argue why it shouldn’t also be in yours.

Comparison of the D-Line, S-Line, and G-Line P2

We’ve already talked about the comparison between the various plastics a little bit, but wanted to go into a little more detail. Discmania sent us a fresh D-Line P2 and a few new S-Line P2s to compare to our G-Line P2. After some tests on the field this trio was very similar and very consistent.

We previously stated that the G-Line had a little more fade and glide than the S-Line. We’d still stand by this statement, but it is worth noting the G-Line has beaten in a bit for us and the fade has softened a touch, but it is still there. The S-Line, when brand new, was the most stable at high speeds. It had a more resistance to turn than anything else we threw during our practice session.

The D-Line was the most different among the trio, but even then the difference wasn’t that dramatic. The D-Line had the same amount of glide and the nice stable flight, but had maybe a touch less fade. We’d easily be able to give the D-Line P2 a 1 for fade instead of the slightly higher numbers we gave the G- and S-Lines.

On approach shots it was very hard to tell a difference between the plastic types. For example, we were able to stand about 150 feet out and nearly park every single approach on one hole. With a consistent release, we could trust the P2 on each throw.

We said it before, but we’ll say it again, no matter the plastic you choose, you really can’t go wrong with the P2.

Save at the Discmania Store

After sending us a pair of G-Line P2s from the new Discmania Store, Discmania wanted to pass along some savings to you too. The first 50 people to use the promo code all-things-dg-1 at the Discmania Store will receive 10% off. Don’t hesitate though! Once it has been used 50 times, this offer will disappear.

Do yourself a favor and take the all-things-dg-1 promo code to the Discmania Store and pick yourself up some goodies like the new G-Line P2.