You are at:Home»Reviews»Putters»Discmania P1 Review

For such a simple type of disc, the putter in disc golf is one of the most unique. Each one out there has a slightly different feel, slightly different flight, but also the same end goal: hit the chains. Some putters are clearly more popular than others among the masses. Others you see pop up from time to time and until you throw them, you’re not sure what all the hype is about. For us, the Discmania P1 is exactly that disc.

When a new video showing what a professional disc golfer hits the web they usually start with their putters. From time to time a member of Team Innova or Team Discmania, especially in Europe, says they putt with the P1. Discmania sent us a P-Line and S-Line P1 to review and we could quickly see why many, especially spin putters, like the P1.

Discmania says this about this very straight putter:

The Discmania P1’s flight characteristics is very straight both at low and high speeds. The P1 is ideal for a putter and it works great as an approach disc. This is one of the truest flying putters out there.

The P-Line used in the P1 is a very soft and grippy blend of plastic. It nearly has a D-Line feel to it. It is one of the grippiest blends of P-Line plastic our testing team has felt. The S-Line had a little more stiffness to it and was one that we preferred off the tee more than the softer P-Line.

Regardless of the plastic choice, two things about the P1 stood out to us. First was the very straight flight. It is surprisingly stable at high speeds and can hold up to a little bit of power when you lean into it. If you have a tight window to it and need the added control of a putter, feel free to shoot straight at it. The P1 will fly on the line you want it to fly on. Give it some hyzer… expect it to fly on that angle. Turn it over a little… expect it to fly on that angle. Smooth flat release… smooth straight flight.

As the P1 begins to reach the end of the flight the P1 will finish just barely to the left of the initial line. It doesn’t fade that hard at all and really doesn’t have much movement to the left for that matter. While some discs with this little fade tend to just sort of fall out of the sky and drop on the same line it starts on, the P1 had just enough movement from center to show a hint of fade. Skips? No chance. This isn’t that disc. This is the disc you throw to hit that window. This is the disc you throw to get yourself out of trouble when you have a clear view of the basket. It’s straight. No doubt about it.

The second feature that stood out was the lack of glide. The Discmania P2 can glide for days. The Innova Aviar has the same glide that many know and love. For the P1 is a pretty shallow putter and can easily fit into your hand. The lack of depth in the P1, combined with the very neutral flight, doesn’t allow the P1 to glide that much. It didn’t translate to the longest putter off the tee, but it did translate to a spin putter’s dream inside the circle.

With a very straight flight and a touch less glide than other putters the P1 is a disc you can throw right at the heart of the chains and trust it will fly very true. Spin putters should find this to be very appealing. You won’t have to worry about the P1 gliding over the top of the basket or fading out at the end of the flight. Pick your point on the basket and give it a good, firm throw. You have the control over the disc. There won’t be any hidden surprises in the flight. Pick a target, let it go, and wait until you hear chains. 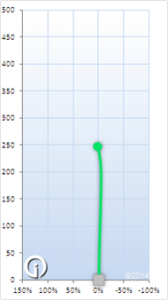 Overall, we’d rate the Discmania P1 at 2, 2.25, 0, 0.5 to 0.75. These numbers differ slightly from the numbers Discmania gives of 2, 3, 0, 0. We don’t feel like it has quite the 3 for glide and does have just a hint of fade at the end. The S-Line might have just a touch more than the P-Line and we wouldn’t be shocked if after some more time to beat the putter in, that fade goes away.

The flight chart from inbounds Disc Golf shows this flight we were experiencing. You’ll be hard pressed to find a putter that is as straight as the P1. There are likely longer options out there, but very few will fly as straight and true.

There is no doubt that even a push putter could enjoy the P1, the advantages for a spin putter are very clear. Up until this review, the P1 was an unknown disc for us. After plenty of time with it on the course, its clearly a putter that can be used in a variety of ways. You’ll get a very straight flight that so many desire on drives or approach shots. Even though it lacks a little bit of glide at times, you can quickly learn that a little added power won’t hurt the P1. Inside the circle, all you’ll need to do is pick out a point on the basket, aim and throw. You don’t have to be delicate with it. Even though it isn’t one of the most talked about putters available, the Discmania P1 can certainly hold its own.