You are at:Home»Reviews»Midranges»Discmania MD3 Review

The overstable midrange. You crave distance, yet want control. You want a strong fade, yet also want control. It can be a tough combination to find. Each option on the market can appeal to a different style of golfer. In the terms of the Discmania MD3, you get it’s own unique combination of speed, glide, and fade.

Discmania says this about their third midrange release:

The Discmania MD3 is a reliable and versatile midrange disc, that in it’s different weights can be used to fill all midrange needs of an average player. It has a sleek profile that is easy to grip even for those who have experienced problems with Midrange discs before. Tight and long fairway shots, medium range drives and really long approach shots are not a problem with this disc.

Discmania sent us a pair of MD3s to review. One weighed in at 180g and the other at 167g. Right away you notice the proposed flight numbers from Discmania: 5, 5, 0, 3. In our tests, those are close, but it isn’t quite as stable as advertised. Don’t read that as “not stable” though, it just is a slight difference.

The MD3 easily sits in the Speed 5 category. It is a faster midrange and likes to fly fast. It is nearly a tweener disc in terms of speed. It can’t quite break the distance barrier you can get with a fairway driver, but it will surely try. This type of speed translates to a nice full feel in the hand. From a fan grip to a power grip the MD3 will be comfortable to throw. We do agree with Discmania’s comments about how easy it is to grip.

Along with the speed, the MD3 does have a nice amount of glide. We can’t quite call it a 5, but it is close. If you consider a typical Roc to be a 4, the MD3 has just a touch more, but isn’t enough to bump it a full number. The glide is very apparent though. Once it gets moving down the fairway it will start just float with ease. It certainly won’t want to dump out of the sky that quickly.

The stability of the MD3 is a little tricky. It does nearly what you would want it to do, but it can be a little tough to master. We can always tell whenever we test a disc and we get a feel for it. The disc starts to remain in the bag during our rounds. It is kind of our way of checking it off of our list. That doesn’t mean we dislike it, but typically when we test a group of discs, once we have enough data to go on for that round, we move on to the next. In the case of the MD3, this one was being thrown quite a bit. Trying to find a way to describe the flight is a little hard.

The stock run MD3 does have a hint of turn. It isn’t a lot, but it is there. If we gave it a little hyzer, it would flip up a hair. If we threw it flat we saw just the smallest of turns. Due to that slight turn, it now has a little more real estate to cover during its fade. This does make it a little more workable than expected, but with the speed and glide factored in, it is a tough little combination. While tough, it can be useful though. The added glide will help the MD3 break out of the turn and always finish left unlike some discs that don’t glide as much.

At the end of the MD3’s flight, a moderately strong, yet forward fade will show itself. Again with the fight ratings, we can’t quite give it a 3 for the stock run MD3, but it is strong. The glide keeps the MD3 in the air longer than expect and allows the fade to actually carry forward quite a bit. Like we previously stated, it can be a little hard to describe here as well. For most, if you want strong fade, you might not want as much glide and equally the other way around. While the MD3 is controllable early on, when you get into the mix of glide and fade, it becomes a little less controllable. If you can master the combination, it could easily work for you and there are certainly holes out there where you want this type of flight. It makes the case of the MD3 being more of a tweener stronger.

We keep referring to the “stock run” of the MD3. The MD3 was initially released as a fundraiser in Glow plastic for the 2013 European Open. These were a little flatter than the other MD3s we were testing. The first MD3s to be released weren’t quite that stable at all and flew very straight. The run we were testing though was much closer to the glow MD3s, but still were a tick less stable. The glows showed virtually no turn and had a little more fade. As a trade off though, it had a hair less glide and flew closer to the numbers we were expecting. 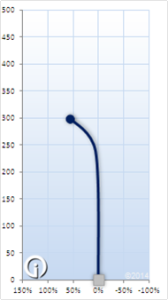 The flight chart from inbounds Disc Golf shows a flight closer to what were seeing with the Glow MD3s, but is still very close to what the stock C-Line run is like. You’ll see virtually no turn and if you do see any, it is small. The fade at the end of the flight is relatively strong, but nothing overwhelming.

The Discmania MD3 is a unique combination of speed, glide, and fade. It flies fast and wants to get to its destination quickly, but does it with some oomph at the end of the flight. While you might desire the MD3 to continue to gain some distance, it will want to hang a left and fade pretty quickly. That can certainly be a useful flight, but might not be your everyday midrange.

Is there a spot for a disc like the Discmania MD3 in your bag? Yes. Will you reach for it on a consistent basis? Possibly. Whenever you do reach for it, you can trust it won’t turn over and will fade out at the end each and every time. If you like a fast midrange, the MD3 is worth throwing. 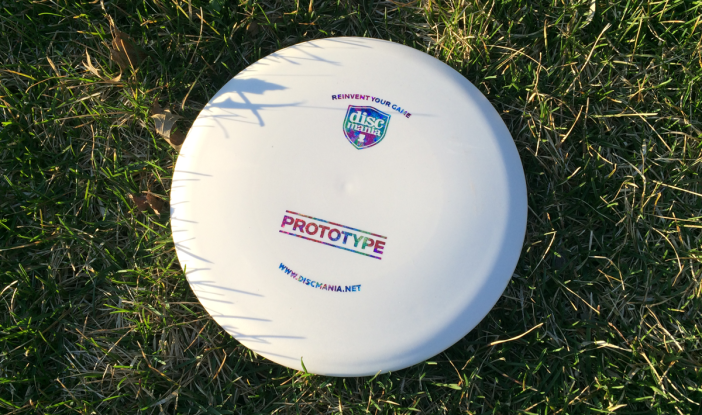 The Discmania MD3 is now available in the popular P-Line plastic through the Discmania USA Store. Discmania sent us one to check out and it quickly became our favorite version of the MD3. We previously noted how the C-Line MD3 had a little bit of turn and the Glow C-Line had a stronger fade than it’s non-glow counterpart.

For the P-Line MD3 it is a little combination of both. It is one of the flatter MD3s we’ve tried and has a very comfortable grip. When thrown we saw a lot of stability at high speeds and a lot of resistance to turn. We could really lean into the MD3 and it would hold that line throughout. Even the strongest arms in our testing group could put a lot into a throw and the P-Line MD3 would really fight it well.

The fade on the P-Line MD3 was softer than the C-Line. It would finish slightly to the left, but not by much. We’d rate the P-Line MD3 at 5, 4.5, 0, 2. We can’t help but wonder just how straight this disc might be once it beats in a little bit. The P-Line plastic can hold up to the casual use, but once it gets on the course it will beat in nicely.

One of our testers said “this might be the closest thing to a Discmania Buzzz.” — In a positive sense, of course! The prototype Discmania P-Line MD3s are now available in the Discmania USA Store.

Discmania continues expand their MD3 offerings with the recent release of their midrange in G-Line plastic. As we’ve stated above, we’ve never quite found a MD3 mold that fits the true 5, 5, 0, 3 flight ratings. There is either a little turn, less fade, or slightly less glide.

Well, when it comes to the G-Line MD3, we feel they’ve finally hit it on the nose. The glide is certainly at a 5 level and the stability has been ironed out. It certainly is the most flexible and is on the gummy side of things. The flight plate is on the flatter side of things, but not quite as flat as the P-Line.

The high speed stability was the closest we’ve seen to the Glow C-Line MD3, but it wasn’t over powering. We could comfortably give this some power and we knew it wouldn’t turn on us much at all. If there was a hint of turn, it was minimal and didn’t really change the overall flight.

At the end of the flight the fade reminded us of a solid Roc fade. Consistent, yet it won’t knife too hard. Steady is what we’d expect out of a disc like this and the G-Line MD3 can do it.

Between the C-Line, P-Line, and now the G-Line MD3, you’ll be able to find the right combination for you. We’d even expect the G-Line to wear in nicely and become closer to that P-Line flight over time.

The G-Line MD3 is currently available at the Discmania Store.