You are at:Home»Reviews»Midranges»Discmania MD2 Review

We’ve stated many times how finding a straight flying midrange disc that is right for you and your game is vital to being a successful disc golfer. Each midrange available has a slightly different feel and a slightly different flight, but all accomplish nearly the same end result. Discmania has a few midranges that can accomplish this shot with one being the MD2. The Discmania MD2 slots right in the middle of their two midranges and can easily be a option to fill a void in many disc golfer’s bags.

Discmania says this about their popular MD2:

The Discmania MD2 is a midrange disc that is very versatile for both recreational players and touring pros. Straight flying, stable, quick and accurate – these discs will hold whatever line you put them on. As a slightly less understable disc compared to the MD3, more players find the MD2 useful for straight medium range drives as well. The D-line version wears the fastest and makes the disc super straight.

Discmania sent us a pair of D-Line MD2s to review with one weighing in at 180g and one at 168g. Both had a very similar flight, but the lighter one was a touch less stable. The D-Line plastic, while not the most durable, does provide a lot of grip and tends to allow the disc to glide a little easier than other plastics.

The MD2 will feel very full in the hand with a rounded nose and gradual dome across the top. The shoulder is pretty gradual which creates a nice small dome. It isn’t the flattest midrange, but it doesn’t want to be. The dome helps keep the MD2 a little stable at high speeds while also giving it a decent amount of glide. The MD2 is virtually beadless, but it does have a very slight microbead on the bottom. This doesn’t play a factor in how it feels in the hand though. If you don’t like a beaded midrange, the MD2 is still worth a shot.

In terms of the overall flight, the MD2 won’t do anything too crazy, but that is a good thing. With a clean release the MD2 will be nice and stable at high speeds. It is more stable than the MD1 and very close to the MD3 in terms of high speed stability when brand new. You can have a tight window in front of you and can trust the MD2 to hold the angle you released it on and fly straight. After a handful of rounds with the D-Line MD2 we did see a little hint of turn break into the disc, but it was still not going to do anything too flippy. It really turns into a great small hyzer flip machine. The lighter MD2 had a little less stability even when new, but it wasn’t as understable as the MD1 in our tests.

Each time we picked up the MD2 on a hole, we realized we weren’t always just looking at a straight shot, yet we still had confidence that the MD2 could do the trick. For example, on one hole we needed a slight turnover shot. Some might pick up a really understable midrange and let the disc float on over, you might get a little too much turn out of it. The MD2 is stable enough to be very controllable, yet with a very soft fade, it can hold a big anhyzer line. We gave the MD2 a little added height to work with and just turned over on it ourselves a hair. It didn’t need much to start this anhyzer flight, but it did need some help. Once it got in the air it started a left to right flight pattern before flattening out slightly at the end of the flight. It was a very smooth anhyzer and didn’t do anything unpredictable which was nice. The same confidence that you’d have in the MD2 when throwing a straight shot can easily translate to small turnover shots like this.

The MD2 can also be an option on slight hyzer shots as well. While it doesn’t have a fade as strong as the MD3, it will finish to the left. If you need a stronger finish from the MD2, just give it a little added hyzer angle on release and it should hold that line for most of the flight. Little sweeping hyzer shots prove very accurate since you know the MD2 won’t glide out too much on you, but it also won’t skip away.

You might be surprised with the distances you can get out of the MD2. For us, it was a tick faster than most midranges and had a nice amount of glide. It seems a little faster than a Roc, but doesn’t quite jump into that Speed 5 category. If you’ve ever found a hole you struggle to reach with a typical midrange and don’t want to jump to a fairway driver, the MD2 might help you gain that extra distance you’ve been craving. 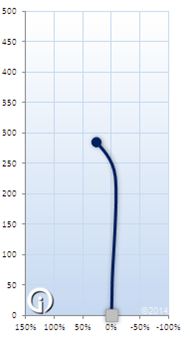 We can easily see the MD2 being worked into a disc golf bag and used in a variety of ways. You can throw in a few C-Lines for your everyday shots and combine those with a few slightly worked in D-Lines and you have just about every midrange shot out there.

Overall, we’d rate the Discmania MD2 at 4.5, 4.5, -0.25, 1.5. These numbers are slightly different from Discmania’s 4, 4, 0, 2 numbers. The combination of speed and glide makes for a slightly longer midrange, while the very neutral flight gives you great control.

The flight chart from inbounds Disc Golf shows a flight similar to what we saw. You’ll get a nice straight flight with a moderate finish at the end. It isn’t anything too dramatic, but it is consistent and reliable.

The Jolly Launcher MD2s have a slightly higher dome and a stiffer feel to it which translate to a slightly more stable flight. We saw about the same amount of glide and fade as previous versions, but this run of MD2s showed more resistance to turn and held up in a headwind a little easier.

During our latest tests we said how this is exactly how we’d expect an MD2 to fly. The slightly raised dome really fills out your hand and will help it glide on down the fairway. If you’ve been wanting an MD2 that was a little more stable, this is what you’re wanting. It can really turn into an everyday midrange for you.