You are at:Home»Reviews»Midranges»Discmania MD1 Review

The most desired shot in disc golf might be the dead straight shot. You need the right disc combined with the right amount of distance and speed to make it happen—especially in the midrange game. While it is not the newest disc available, the Discmania MD1 can easily fill the slot of the straight midrange disc. From wooded holes to the more finesse shot where you have some room to play, the MD1 can help you execute that shot.

Discmania says this about the first disc they ever released:

It is a stable flyer with good range and a predictable low speed fade. The MD1 comes in two blends: more grippy D-line and very durable S-line. A limited quantity of the discontinued softer S-line (SG-line) discs are still available.

Discmania sent us a pair of MD1s to review. One weighed in at 180g and one at 168g. Both discs were in their SG-Line which is the softer S-Line, but is not the same as their G-Line.

The MD1 has a slight dome that carries consistently across the top creating a very full feel in the hand. It can feel a little deep, but once you adjust your grip and get used to the feel, you’ll feel right at home. The softer blend of their S-Line plastic makes it easy to dig a thumb into the top of the disc for a nice strong grip. The MD1 isn’t beaded, but with the way the rim is shaped, it can feel like it has a small bead on the bottom of the disc.

The MD1 wants to be, and could become, that workhorse style midrange in your bag. In our tests, the MD1 was a very neutral flying midrange. There was just a touch of turn which allowed it to flip up from a slight hyzer or even track into a very small turn. On the tightly wooded holes or on approach shots where we wanted to really attack the pin, the MD1 performed well. Due to the nice neutral flight, we were really able to attack the target and trust the MD1. It might not be the strongest performer on bigger hyzer shots because it won’t want to hold that initial angle for that long and the fade is quite minimal. For straight and slight turnover shots, the MD1 will execute the shot with ease.

As we just said, the fade of the MD1 is quite small. It’s there, but it isn’t going to break down doors and do any damage. If you keep the MD1 on a low line, it will have a nice forward fade as it hits the ground. Once it touches down it won’t skip away, but will continue to finish any energy it has left.

The end result is a very tight s-curve style shot—very tight. Like we said at the beginning of this post, one of the most desired shots is that very straight shot that requires the right combination of speed, glide, and stability. The MD1 has that combination and it doesn’t take much to make it happen. Even slower arms will be able to get a very straight flight out of this disc and it will continue to perform predictably with each throw.

After one of our test throws one of our other test team members said the phrase, “That is why they made it. That’s the flight right there.”

He had no other comment when he saw the very straight flight and it became a phrase we would say often during our test session with the MD1. 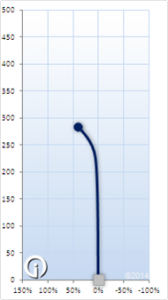 The flight chart from inbounds Disc Golf shows a flight that is more along the lines of the initial flight ratings from Discmania. We saw a little more turn and less fade, but about the same distance.

Overall, Discmania’s first ever release is no slouch. It has the straight flight that is desired by many and easily can be your go-to midrange on the course. From tightly wooded holes, wide open shots, and approaches, the MD1 will be a very consistent disc. It isn’t the fastest midrange on the market, but it doesn’t need to be. With a nice amount of glide, you’ll always feel like you are in control of the MD1. It can handle some power and likes it when you reach back and really lean into one. It isn’t the longest midrange around, but it doesn’t need to me.

Sometimes, it is best to pull away all the bells and whistles and throw a disc like the MD1. It won’t be the flashiest disc at the party, but it will get the job done every time.