You are at:Home»Reviews»Midranges»Discmania GM Gremlin Review 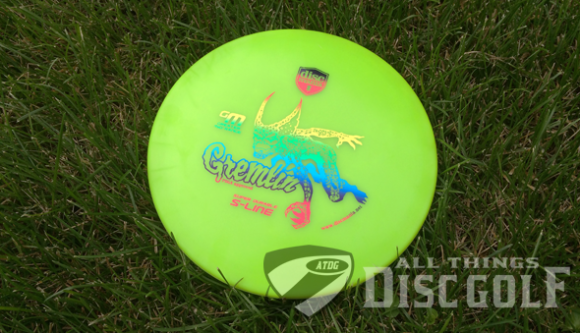 Often it is easy to compare one disc to another. They might share similar characteristics or compliment each other, for example. One disc that breaks this mold and almost sits alone is the Discmania GM. Also known as the Gremlin, the GM was initially released as an Innova branded disc and soon made its way to into the Discmania family. The GM, short for Greater Midrange, is exactly as it seems. It is faster than other midranges on the market, but not quite as fast as a fairway driver. It certainly is a unique disc that just might solve that hole in your bag.

Discmania says this about the GM:

The GM Greater Mid-range Gremlin is a unique mid-range driver in that it falls between a mid range and fairway driver. With a speed 5, glide of 4, turn of 0 and fade of 2. You have seen this disc before as it was a staple in the Innova line for many years. We have added this disc to our line up as we feel it is a great fit for our product line.

After having a GM sent to us by Discmania, we were anxious to see how it compared to other midranges on the market. The GM has a very blunt nose that is reminiscent of the Innova Gator. With a pretty decently sized shoulder that leads into a flat top, the GM comes with a very controllable grip. The small rim combined with what could be called a “flat dome” will feel comfortable to disc golfers of any level. It does feel as if it is a tick faster than a Innova Roc or Discmania MD2. If the rim wasn’t so blunt and didn’t have the big bead on the bottom of it, it would easily fall into the fairway category.

In our minds the disc that you can compare the GM to is the Gator. It had a little more glide and less fade, but a very similar feel and flight. At high speeds the GM is without a doubt stable. Strong arms might be able to get a fraction of turn out of it, but that is only if you really crank on it. If you’re facing a headwind or need it to hold a line, the GM will do it with ease. It can handle power and won’t shy away from doing so.

The GM’s fade is interesting. It’s strong, but not. I know, scientific, right? If you keep it low, it will certainly produce a pretty decent sized skip even for the shape of the wing. If it has some more height the GM will certainly finish to the left, but not quite as strong as you’d expect. The fade has some forward penetration, which does help with that skip. It is a very punchy fade. Almost like a jab. It comes at you quick, but it isn’t long. If you can get a feel for how the GM wants to finish, it can be a very useful disc.

In terms of speed, odds are you’ll see it line up right along side similar midranges. While it is a little faster, it might not be any longer. Because it is so stable at high speeds and with that punchy fade at the end, distance isn’t really on the GM’s mind. Other discs in the Speed 5 category will likely be a little further, but you’ll be hard pressed to find one as stable. If you’ve ever thrown a Gator (or similar disc) and wished you had something with a little more glide and not quite as overstable, the GM could be what you’re looking for.

Overall, we’d rate the Discmania GM at 5, 4, 0, 2.5. Those number are similar to what Discmania gives, but with a touch more fade. It has a very unique feel and flight and is hard to compare to other discs available. 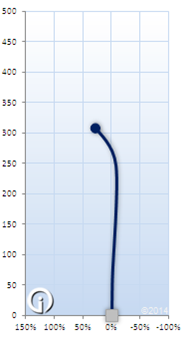 The flight chart from inbounds Disc Golf shows a flight very similar to what we were seeing. The strongest arms will see a very slight amount of turn, but others can expect a very stable flight. It fights the wind throughout the flight, but does so with a very brief, but strong fade.

The Discmania GM is in a class of its own. It is difficult to compare the GM to other discs. It flies like some, but doesn’t feel like them. It feels like others, but doesn’t fly like them. From our testing group, the GM was either a love or hate type disc. It is either a disc you enjoy throwing and filled that slot in your bag, or just didn’t quite do what you wanted it to do. Since it does sit right in between a midrange and fairway driver, it will either be too much for some and not enough for others.

Everyone has a disc in their bag that not many of their friends throw. You keep it in there because it works for you. The Discmania GM might just be that disc.