You are at:Home»Reviews»Drivers»Discmania FD2 Review

When the Discmania FD was released it quickly gained popularity as a stable-to-understable fairway driver. It proved useful for straight line distance due to a very neutral flight and great glide. When the second run FDs were produced, disc golfers quickly noticed the slightly more stable flight that produced minimal turn and a touch more fade than the first run of the FD. It was so well received, Discmania took this feedback and turned it into what we now know as the Discmania FD2. While the FD2 isn’t identical to that second run FD, the flight paths do mimic each other.

Discmania calls the FD2 a workhorse driver for all skill levels:

It’s not too glidey to avoid you from sailing off-target and it has a low-speed fade you can depend on. Packed with a nice amount of high speed stability, this disc gives you nice straight lines when thrown flat and hard. The more power you put behind this disc, the straighter lines you will see it perform. When thrown more gently, the fade will kick in earlier in flight making cutting corners easier.

Discmania sent us a first run FD2 to test and after some time on the course, we think the FD2 might just be as popular as its FD cousin.

The FD slots in at that speed 7 slot which translates to a very comfortable feel when you’re getting ready to throw. You don’t have a really wide wing to hold on to, but you are still able to use a power grip when needed. The FD2 has a slight shoulder before a pretty flat top. The FD2 feels nearly as comfortable in the hand as the FD.

When you pick up the FD2 and feel like it can handle some power, you’re right. The FD2 is clearly a disc that you can put your absolute strongest throws into and it will hold up like a champ. You can really lean into the FD2 and trust that it won’t turn over. If you liked the feel of the FD, but wanted that more stable flight, the FD2 is exactly what you’re looking for. If you are also struggling to find more of those coveted second run FDs, the FD2 should give you what you’re wanting.

For a disc of this speed, it can hold up better than we expected in a headwind. The FD2 was able to really remain stable at high speeds when faced with a headwind. We sometimes saw just a touch of turn, but even an Innova Firebird or Discraft Predator will show just a slight turn when thrown into a headwind with max power.

If you wanted a short little flex shot, the FD2 can execute that with ease. We gave it quite a few throws where we tried to force it on a quick anhyzer and it would kick out of it almost immediately. The FD2 would roll back flat before fading out at the end of the flight. This proved useful on those tighter tunnel shots or when we wanted to help the FD2 fly a little straighter than normal.

The FD2’s fade was something that was a little stronger than expected, but still wasn’t extreme. While Discmania rates the fade at a 2, we’d bump that up slightly to a 2.5. Because it is so stable at high speeds, it doesn’t have to break out of any turn. This made it appear to be a little stronger than a 2. It never produced any large skips for us, but it would constantly and reliably finish to the left.

Now, compared to an FD, the FD2 have more stability, but also has a touch less glide. The FD will ride a very straight line with a large amount of glide. It will carry quite far. The FD2 on the other hand will really fight that turn and will end with a reliable fade. They actually compliment each other quite well. 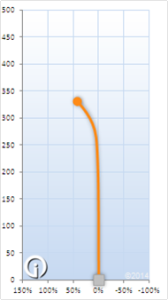 Overall, we’d rate the Discmania FD2 at 7, 4.25, 0, 2.5. You get a great combination of stability at high speeds and fade that produce something that will fly a very predictable flight each and every time. It can handle power and actually performs better when you can give it all you got.

The flight chart from inbounds Disc Golf shows this flight we’ve talked about. An ultra straight flight at high speeds that really resists turn followed by just enough fade. The distances are comparable to most fairway drivers in the speed 7 range, but it does it with quite a bit of stability.

The flight at times reminds us of the older runs of the Innova 11x Champion Eagle-X. The older 11x Eagles have a great deal of stability with a a very reliable fade. The fade might not be as strong in the Discmania FD2, but the overall flight paths are similar.

The Discmania FD2 can fill a slot in many disc golf bags. You’re often faced with a shot that requires distance and control at the same time. High speed drivers are too much and often lack the control needed and discs that aren’t very stable might sneak off course a bit. The FD2 is a disc in which you can find your window you need to hit, reach back and let one rip. You can trust it won’t turn over and trust it will finish left at the end. It won’t fade too hard, but hard enough to hopefully place you right next to the basket.

Once you get used to the FD2, it could easily change your game.

Discmania is releasing the FD2 in Glow C-Line plastic with a special Discmania Store mini stamp and sent us one to see how it compared to the main C-Line FD2.

There is a little bit more dome to the Glow C-Lines which does give the FD2 a fuller feel when you’re ready to throw it. We still saw a nice stable flight at high speeds with this version. It was as stable, if not just a touch more stable at high speeds than the normal C-Line run.

You can also expect maybe a hint more glide too, but it isn’t a mind blowing difference. When all is said and done, you get a very predictable flight out of the Glow C-Line FD2. You’re expecting it to not turn—and it wont. You’re expecting tit to have a lot of control—and it will.

Plus, we have to comment on the looks… who doesn’t love a great mini stamp? Keep an eye out for these on the Discmania Store on Black Friday 2014.