You are at:Home»Reviews»Drivers»Discmania FD Review

The Discmania FD for some disc golfers could become a go-to fairway driver. For others, it will be a disc they reach for only on certain holes. The extremely straight flight of the FD is both a positive and a negative trait depending on the shot your facing. Then, when you factor in the slightly different flight paths depending on which plastic you’re throwing, you realize exactly what the FD can do.

While we’ve had a C-Line and S-Line FD for a while now, Discmania sent us a new G-Line FD to review as well. Along with that trio, we also picked up a D-Line FD from the Discmania Store too. Discmania says this about their Fairway Driver:

The Discmania FD (Fairway Driver) is a very controllable low-speed driver – a tool everyone needs in their bag. Once you learn the its magic you’ll never take it out of your bag. Packed with gigantic glide, this bad boy is also sneaky long if thrown accordingly. The FD is at its best when you need to make an accurate drive and land smoothly on the fairway.

Before we compare flights, let’s talk about the feel of the FD. With a smaller rim typical of other fairway drivers in the speed 7 range, you’ll get a very comfortable feel that any disc golfer can enjoy. The FD had a slightly raised shoulder leading into a moderate dome with a flat top its peak. When you’re holding it, you’ll actually have quite a bit of the disc touching your palm. Our C-Line has a touch less dome than the S-Line or G-Line versions, but it doesn’t diminish the glide that much.

Our baseline review will be talking about the S-Line FD. When we first threw the FD the flight took us by surprise. Out of the box the S-Line showed a touch of turn, but it wasn’t that dramatic. It would slowly track right but hold that slight turn the entire time. Once the FD begins to power down, it will flatten back out and settle down to the ground with just a touch of fade. In the end, it is one of the straightest flying fairway drivers around. While it does have a little turn, think of it like a very tight s-curve. There isn’t a lot of turn or fade at either end of the flight, but there is enough to see it. Once the S-Line beats in a little bit, you’ll see a touch more turn which really opens up the hyzer flip shot.

Regardless of how much hyzer you give it or how beat in it is, the FD will certainly glide for days. This really helps it gain some distance and carry out that tight s-curve flight. The glide is one of the things that really stands out on the FD. About midway through the flight you’ll see how it really just wants to float down the fairway on the line that it is on. At the point where you would expect the disc to star to fade and slow down, the FD hangs up just a touch longer and continues straight.

The FD can really do one thing very well: fly straight. While some disc golf holes call for a little fade at the end or you want that extra movement to get around a tree, the Discmania FD is the one to pull for those tight tunnel shots where you need to hit a small window. The rest is up to you. You can easily trust this disc to fly straight and finish straight.

While the S-Line is the straightest of the bunch, all the versions are relatively close in flight. The C-Line version varies slightly between which run you throw. The first runs and current runs, are the typical C-Line FD flight. You’ll get a little less turn, followed by a touch more fade. If the S-Line version has a -1 for turn and a 1 for fade, expect a -0.5 for turn and 1.5 for fade. It can handle a little more power, but still gives you a very straight flight. Stronger arms will likely enjoy the C-Line a little more than the S-Line.

The second run C-Line FDs were the versions that came out slightly more stable and actually turned into an inspiration for the recently released Discmania FD2. This version is quite stable at high speeds and has some more fade to it. Expect a 0 for turn and about a 2 for fade. If that type of flight sounds appealing and you don’t want to search out that second run, pick up an FD2. That should do the trick.

One of the first releases in Discmania’s G-Line was the FD a few weeks ago. After Discmania sent us one we were anxious to see how it stacked up against the C-Line and S-Line versions. While it certainly showed great glide, it came out of the box like a beat in S-Line. It was a hyzerflip machine. We could give it a little more hyzer and watch it quickly pop up and glide flat and straight.

Because of the added turn, we were able to hit some nice turnover shots that we couldn’t quite get with the S-Line and C-Line versions. We would release it as flat as we could and let the disc naturally begin to turn over. The turn, while more than the S-Line isn’t any quicker. It will gradually get into it and hold it’s line the entire flight before a small fade at the end that will break it out of the turn, but not back to center. The G-Line does have the great grip that is common with other G-Line models from Discmania or GStar models from Innova. Since the FD already had a large amount of glide, there really isn’t a noticeable gain in glide with the G-Line version. The biggest difference we saw was the amount of turn which is almost creating a whole new disc just like how that second run C-Line version led to the FD2.

Finally, when the Discmania Store opened up in the United States, they also released the D-Line version of the FD. In our tests this slotted right in between an S-Line and G-Line with a flight much closer to an S-Line. As with nearly any disc in the base plastic, you’ll see a very glidey flight which is certainly at the top end of that 6 rating for glide. Because of the lower durability, you’ll get it to beat in pretty quick and we would think it would turn into quite the understable flier with time. 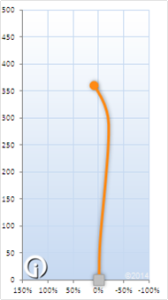 The flight chart from inbounds Disc Golf shows a flight that is similar to the S-Line version of the FD. A little turn that can be controlled with just a touch of fade at the end. If you give it a little hyzer, it will flip flat and fly straight as can be.

If you’re wanting a fairway driver that will fly straight as can be and be equally as controllable then the Discmania FD is the trick. The S-Line version is a great place to begin if you are just getting into the FD. If you are already a fan of the FD and want something with a little more turn that can lead to some great turnover shots, the new G-Line FD is worth checking out.