You are at:Home»Reviews»Drivers»Discmania DDx Review

There are typically a few new disc golf discs each year that fight their way through the crop of new molds to fight for the spotlight. For whatever reason, these discs have caught the eye of disc golfers everywhere and it can easily become the talk of the sport, especially among fans of that manufacturer. This can be said for the new Discmania DDx.

The evolution of the Discmania DD brings us a disc that holds plenty of glide, a neutral flight, and a lot of control for a high speed driver. Discmania says this about their latest driver:

We took our classic Distance Driver (DD) and gave it a little something special that will help all levels of players get further down the fairway with more control. The DDx has a very fast flight with a high amount of glide with a mix of a little bit of turn and a steady, controllable finish.

Discmania sent us a DDx in both S-Line and C-Line plastics for this review and we had a chance to see how they compared to each other and other drivers available.

Starting with the S-Line DDx, you’ll find a disc that has a pretty decent rim size (2.3 cm). It has a nice depth to it which gives you something to grip. Often we find discs with wide rims and shallow shape which is hard to hold onto at times. We always felt in control with the DDx.

As with any disc in this category, our first throws are always full power and straight ahead. We want to get a feel for what the disc wants to naturally do before we try and adjust ourselves to it to bring even more out of it.

Right away we saw the flight Discmania was going for with the DDx. It launched out of our hand and kicked into a noticeable, yet gradual turn. It was the type of turn that produces a smile on your face. You know you got the disc up to speed and you know this allows for a full flight which hopefully translates to distance. Without this turn, you might not get a full flight out of it, and too much turn might show you turned on it yourself. Time and time again we saw this same slight turn out of the DDx which opened the door to more options.

We could drop the wing down a little bit and shape a flight that would have a little more fade to it after allowing it to flip up flat as it flew down the fairway. Hyzer flip style shots were relatively easy with the DDx and just by playing with the release angle, we could do quite a bit.

On the other hand, we could give it a little anhyzer and it would hold up quite nicely. It wasn’t the best turnover disc, but it certainly got the job done.

As the DDx began to lose some speed and power at the end of the flight, the fade was minimal and quite manageable. It was a very Teebird like. It never had a big hard finish, but it isn’t the type of disc that you would want that. This is for pure distance and control. Too much fade and the end result could be undesired. Plus, there are other discs that bring stronger fades than the DDx.

What stands out the most of the DDx is the glide. With each throw we saw the DDx hit an extra gear and carry on down the fairway. Speed is one thing, but having the disc do some of the work for you brings it to another level. When the turn would kick in, the glide helped it hang on that angle and as it would begin to flatten out, the glide allowed it to continue to carry forward. Part of this is due to the small fade too.

Distances with the DDx were quite impressive, especially when you add in the control factor. The two discs that jump out the most in terms of comparison are the Innova Destroyer and Tern. This one sits right between both. The Destroyer has a little more fade while the Tern has a little more turn. The Tern can bring some huge distances, but also needs a little more room to fly due to the greater turn. Destroyers are quite popular among disc golfers of all levels, but the fade can be too much for some.

The DDx brings the slight turn the Destroyer has with the softer fade of the Tern. That x-factor though is the glide. It shares a similar glide to the Tern, but the flight is naturally straighter and is one that many will adapt to quicker.

While explaining the DDx to another disc golfer, the best comparison we could find was an out-of-the-box beat in Innova Destroyer with added glide. That description alone was enough to have him go order a few from his phone right on the course. He said Destoyers always faded too hard for him and the added glide was just a bonus.

When throwing the C-Line version of the DDx, we did see a slightly more stable fight and it could be one that stronger arms prefer more. There was a hint of turn, but not as much as the S-Line version, plus the fade was slightly stronger. The glide was still there, which was a pleasant surprise since we tend to see that drop a bit when the disc is more stable. If you grab an S-Line DDx and are left wanting some more stability, the C-Line is likely what you’re looking for. The opposite can be said too. If the C-Line is too much, give the S-Line a look. Discmania did a nice job here of building one disc that has a slightly different flight based on plastic type, yet it isn’t too dramatic to where it is nearly a new disc. 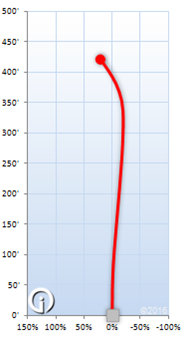 The flight chart from inbounds Disc Golf shows something very close to what we were seeing. The end result is a flight that ends nearly on the same line you started it on after showing a little turn to get things going.

Some discs don’t live up to the hype. The Discmania DDx certainly meets and exceeds expectations. Quite simply, the distance is there. The shape of the flight brings all the elements you’re looking for and the glide adds that extra gear. Once you learn how to shape the DDx or when to give it some more or to back off, the results will be delightful.

A go-to distance driver for anyone from average players to the most skilled? It seems like it.