You are at:Home»Reviews»Drivers»Discmania DD2 Review

Do you ever find yourself looking at your bag of discs and wondering why you always keep that one certain disc in there? You never take it you, yet you aren’t sure why you keep it in at the same time. Then, you walk up to a hole and realize that said disc is the perfect choice for that hole. In the case of the Discmania DD2, you might not bring it out on tight wooded holes, but on those wide open “grip it and rip it” type hole, its tough to find a better option.

Discmania has this to say about their high speed bomber:

The DD2 Frenzy is currently the farthest flying Discmania brand driver and is possibly the longest flying Innova disc made! This disc offers tremendous speed combined with good glide and great control! This disc is a hybrid of Innova’s Katana and Boss. You get the best of both in the DD2! Give it try – you’ll probably reach distances you’ve never reached before. Also available in light weights, thanks to the Blizzard C-line plastic.

Discmania sent us a pair of S-Line DD2 in the Echo S-Line to review. One weighed in at 172g and the other at the max 175g. Both had a moderate amount of dome on them with a nice little pop top. This of course helped give the DD2 a little added glide, but also kept it a little stable, especially for the slower arms in the test group.

Like we said at the beginning, the DD2 is a disc you pull out on holes where you can really put some power behind it and let the disc do the work. You’d keep it in the bag for just those holes. You’re looking for pure distance and only pure distance.

Discmania rates the DD2 at 13, 5, -2, 2. Out of the box, especially if you only have 350 foot power or less, you might think the DD2 is a little more stable. In our tests, the slower arms needed one of two solutions to really see the true flight of the DD2. Either throw a lighter weight (upper 160s) or give the disc some time to beat in. The slower arms could get the DD2 up to speed, but it didn’t show a lot of turn at all. The 172g DD2 had a hint more turn, but its clear that after some more time with the disc, you’ll lose a little of that stability.

Our strongest arms were able to show really what the DD2 could do, especially when fresh. The best throws came on a wide open, slightly downhill hole. You have a lot of room to play with and is nearly a textbook hole for the DD2. With a very strong throw aimed right down the middle of the fairway the DD2 jumped out of his hand quickly and clearly wanted to fly far. About midway down the fairway a slight turn kicked in. This was the type of turn slower arms were expecting. It does a little more than just drift to the right, but it never turns into a roller.

The angle of the turn is near perfect to what you’d want out of a long distance shot. The turn helps it carry down the fairway for that added distance, but doesn’t give you the idea that you’re going to lose control.

The DD2 certainly has fade, but it won’t be as strong as many high speed distance drivers. When compared to an Innova Destroyer, for example, it won’t be as hard, but will show similar characteristics. If you’re able to power the DD2 into a good sized turn, the fade will be just strong enough to bring it back to center, but not much beyond that.  For those who don’t quite have the power to get a fresh DD2 to turn, the DD2 will finish to the left, but not do anything too dramatic. It doesn’t take many throws to learn the natural flight of the DD2. You won’t have to worry about it finishing to the right, but you’ll also be able to trust it won’t fade away too hard either.

In terms of distance, the strongest arms were able to throw some of the longest shots we’ve seen. It’s hard to call it the longest disc available since our tests often are done in different conditions and we haven’t thrown every other competitor in the distance category, but it is certainly high up on the list.

There is little doubt the DD2 is a high speed driver. The wide rim could be a turn off to some, but with only one thing on its mind (distance), you don’t blame it. You’re at the top of the mountain in terms of speed. The glide, especially with that little pop top, can kick in about midway through the flight. If you are able to get the DD2 to turn, the glide will be even more noticeable. 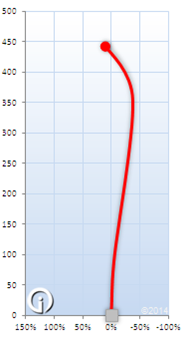 Overall, we’d rate the Discmania DD2 exactly as Discmania has it: 13, 5, -2, 2. It is a very high speed driver that loves some distance. Fresh off the shelves, you might not get as much turn as you’d expect. Power players will show some more movement early on while others will either need a lighter weight or some time to beat in the DD2.

The flight chart from inbounds Disc Golf depicts the type of flight the power players will see out of a new DD2. Plenty of distance with a tight, but noticeable s-curve can be achieved, you’ll just need some power.

If you’ve been searching for the right disc to throw when you have plenty of room to play with and your goal is pure distance, the Discmania DD2 is worth a shot. Don’t be discouraged if the DD2 is a little stable at first. Give it some time to season (heck, go hit some trees with it), and you’ll likely get a better flight out of the DD2. It turns, but isn’t flippy. It fades, but isn’t overstable. It’s right in the  middle which can allow for some monster throws.