You are at:Home»Reviews»Drivers»Discmania DD Hysteria Review

The first distance driver by Discmania was initially approved by the PDGA in 2008, but it remains a viable option today on the course for nearly any level of disc golfer. The Discmania DD, also known as the Hysteria, falls right in the middle of the speed spectrum when it comes to distance drivers. Sure, there are faster discs, but those often are too fast for anyone with less than 300 foot power. Other discs that might appeal to the slower arms, might not be as stable as power arms desire. The Discmania DD is a disc that can meet the needs and wants of anyone out there.

Discmania says this about their speed 11 driver:

Our first Distance Driver, The Hysteria has the reliability of Innova’s Roc but it flies a lot further. The Hysteria provides control with long distance. It offers great accuracy when throwing both hyzer and anhyzer shots. Steady, predictable glide and a dependable fade at the end of the flight are some of this discs key features.

Discmania sent us a pair of DDs to review. Both were in their S-Line plastic with one weighing in at 175g and 172g. Both discs flew very similar and weren’t different enough to notice any difference.

The DD is a combination of Discmania’s anyhzer top and Innova’s Wraith bottom. The combination brings a very stable flight at high speed with just a very moderate fade. Other discs that have this much resistance to turn tend to have a larger fade while other options with this little of fade tend to have a little more turn. It’s a unique combination that does take a little getting used to.

When you reach back and let the DD fly down the fairway, you’ll immediately notice the high speed stability. The DD will not show any signs of wanting to kick into any turn. Even when faced with a decent headwind, the DD would continue on the angle it was released on. Need that big sweeping hyzer shot? The DD can do it. Need it to hit a window straight ahead? Aim for it and let it rip. It is just as stable at the first part of the flight than any overstable distance driver out there.

Now, with all that said, the fade on the DD is quite small and less than we initially expected in our tests. Because of how stable the DD is, you’d think that since it doesn’t have to break out of a turn, it will finish quite a bit to the left. The DD’s fade is certainly there, but it won’t kick in hard. Expect the DD to have a fade similar fairway driver like an Innova Teebird. It also reminded us of the fade we saw during our recent review of the Discmania G-Line PD.

Typically we’d say that a speed 11 driver with moderate glide could be a great option for slower arms. Combined with the turn and fade, it certainly isn’t the worst option on the market, but for slower arms, some adjustment to how you throw the DD could be in store. Typically for distance, weaker arms need a little more turn out of the disc in order to get some more movement and carry out of the disc. The DD didn’t want to glide a tremendous amount for us and in turn showed us that the DD will rely on arm speed more than glide for distance.

In order to combat this, if you are able to force it into a slight anhyzer out of your hand and get the DD to fly on this forced turn, you’ll likely produce a little more distance out of it. Even into a headwind, some of the most impressive shots we saw from anyone with less than 350 feet came on shots with this forced anhyzer line. We kept the height the same as we were on our straight or hyzer shots, but allowed the disc to naturally hold that anhyzer angle for the start of the flight before fading back out at the end. If you give it a little more height and turn over on it a little more, it will hold this line for a longer flight and turn into a very controlled anhyzer finish.

This is a shot that is really worth learning if you are just getting into disc golf. The very controlled distance shot will come in handy as your skill level continues to develop.

While power arms can also produce a nice flight with this little anhyzer release, the strong arms will also love just how much power they can put into the DD. It can handle nearly the strongest arms on the market and still end the flight with just that moderate fade. Don’t be afraid of giving the DD too much. If thrown correctly, it can be a very straight flier with a predictable finish. 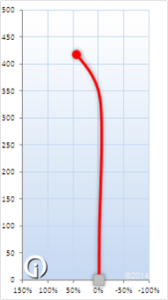 Discmania rates the DD at 11, 5, 0, 2. Overall, we’d give similar ratings to the DD of 11, 4.5, 0, 2. The flight is a unique combination of a very stable flight at high speeds and just a touch of fade at low speeds. It doesn’t quite reach the 5 rating for glide for us, but will get down the fairway with some power.

The flight chart from inbounds Disc Golf you’ll see the very stable flight when initially thrown that is followed by just a touch of fade. Power players will be really able to get the DD to cut through the air quickly and get down the fairway fast with a lot of speed.

The Discmania DD certainly is a unique combination of flight characteristics. You get a very stable flight at the start which will easily resist headwinds followed by a moderate fade at the end. It won’t skip away from you, but will consistently finish to the left. If you can learn the right anhyzer angle to release it with, slower arms will get a little more distance out of it, but it will do so with great control.