You are at:Home»Reviews»Drivers»Discmania CD2 Review

When we reviewed the Discmania CD, we talked about how valuable control is when it comes to distance shots. Being able to throw far can be great, but if you aren’t landing where you wanted, you’re not helping yourself. What initially started as a possible retool of the CD turned into a brand new disc for Discmania. The Discmania CD2 is evolution of the CD and arguably provides even more control than it’s predecessor.

Discmania says this about their latest driver:

The CD2 is a disc for those hungry for control. It doesn’t get too flashy with a lot of turn and fade like many distance drivers out there, but on the contrary it can hold a line and still bring you the distance needed to cover most fairways. The CD2 is actually a pretty close relative not only to the CD, but also to our praised speed 10 Power Driver, the PD. Out of the box you will see the CD2 perform a lot like a seasoned PD, providing you with enough stability to conquer most headwinds and a reliable low speed fade that takes you underneath the basket. For the less powerful players the CD2 can easily work as the most overstable driver in the bag, while the majority of players can trust the CD2 as their main driver in a wide range of situations.

Discmania sent us a CD2 which has been initially released as a fundraiser for the upcoming 2015 Aussie Open. In our review of the CD we stated how we found the CD to be more stable than expected. In terms of the CD2, we saw a flight with a slight turn and a subtle fade which certainly led to a lot of control.

The CD2 had a very familiar feel to it. We think it feels like a faster Discmania FD. The top of the CD2 has a gradual dome across the entire disc which starts with a decently angled shoulder on the wings. It is a very “full” feel in the hand. The CD2 is by no means flat, but it isn’t that “pop top” dome either. This dome really does help the CD2 get down the fairway with some added glide.

The rim size measures the same as the CD, and the recently released Innova Thunderbird, but all three flew with slightly different speed during our tests. We called the CD a Speed 10 and the Thunderbird a Speed 9. While they are very close, we’re giving the CD2 a Speed rating of 8.5. It is just a hair slower than the Thunderbird and fell just a little shorter in our tests in terms of distance. They are all very close, but there are some slight differences.

We like Discmania’s statement above about how the CD2 doesn’t get “too flashy.” We think this is a great way to describe the flight of the CD2. In a sense, it doesn’t do anything too anything too crazy in the air, but we think that’s a good thing. It isn’t going to fly at light speeds, have a big s-curve style shot, ride that “frozen rope” line, or produce a big skip finish. For a “control driver” you want the flight to be relatively unexciting. The more it is doing in the air, the less control you have over it. While the CD2 is lacking in the style department, it is thriving in the control department.

When you first release the CD2 you’ll notice a small amount of turn. If released with a little hyzer, you’ll get it to flip up and glide on a nice straight path. A flatter release will show a little movement to the right, but it certainly isn’t flippy. We found ourselves with many low ceilings during our test and some small windows and felt like the CD2 could always find its way through the trees with a lot of confidence.

Even with a little bit of turn, the CD2 does have enough fade to bring it back to the left, but it isn’t that dramatic either. The fade actually kicks in pretty late in the flight and leads to a very straight finish. It starts to move to the left on a forward trajectory before having a slightly harder push to the left at the very end of the flight. We found it to be harder than the FD’s fade and slightly harder than the fade of the Thunderbird, but still quite soft.

The CD2 can certainly fly on some straight lines, but also holds up well on small hyzer shots. You’ll need to help it out by giving it some added hyzer and some room to fly, but it can execute the shot. We gave the CD2 some tests on anhyzer shots and saw mixed results. It would hold the turn for a while before breaking out of it. On a few shots, we were certainly hitting the right line and wishing the CD2 would hold that angle, but it would break out of it late and show a slight fade. You can still control it quite a bit, but don’t be surprised if it breaks out of it a little early. 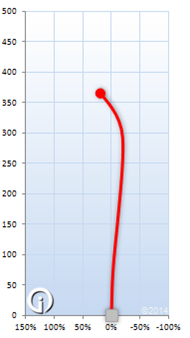 Overall, Discmania rates the CD2 at 9, 5, -1, 2. We’d adjust that slightly to rate it at 8.5, 5, -1, 2. While it has great glide and just that slight movement, the speed rating falls just a hair shorter than some of the other Speed 9 drivers that have been recently released. It might be hard for some to notice the difference, but in our tests the difference is there.

The flight chart from inbounds Disc Golf shows a flight we were experiencing with just a little turn to keep it moving followed by a slightly stronger fade. The end result is a very straight flight with a lot of control.

The word we’ve used the most in this review is control.  You can trust it’s slight turn and fade to work around some obstacles and the added glide to get down the fairway. If you’ve wanted a little more turn out of the CD, or some slightly longer distance over the FD, the new CD2 might be the right combination you’re looking for. The CD2 won’t be the disc that turns heads in the air, but it will be the disc that turns heads when it is sitting next to the basket.

The CD2 is currently available as a limited fundraiser for the 2014 Aussie Open and can be found at the Discmania Store.

After the initial release of the CD2 in the popular C-Line plastic, Discmania is now releasing the CD2 in their new G-Line. They sent us a 175g and 166g G-Line CD2 to check out and we have to say these were impressive.

Out of the box, both discs were a little less stable than the C-Line version which translated to a very controllable flight. We were able to really control these on nearly every type of shot we gave it. Where the G-Line CD2s really shined were on slight anhyzer and straight shots.

We’d give the CD2 a strong throw on a flat release and see it kick into a late turn without completely rolling over. It would hold the initial line, flex to the right and then show just enough fade to finish back on the initial line. These were much more like the “longer FD” that we were looking for.

We were really loving it though on short, tight anhyzer shots. We’d release it with enough height to fly far and turn over on it just a hair. It would continue to push forward holding this initial angle until about 75% through the flight. Then it kicked into even a harder turn before having just enough fade to break it back center. We often see shots like this where it holds the anhzyer angle but rolls to flat before fading. Not the case in the G-Line CD2. It holds that line, maintains that line, and the added turn ensures it will do exactly what you were wanting.

If you tried a C-Line CD2 and found it to be too stable, give the G-Line a shot. We’d bump our turn rating to -1.5 and keep everything the same. This disc can really fly.