You are at:Home»Reviews»Drivers»Discmania CD Craze Review 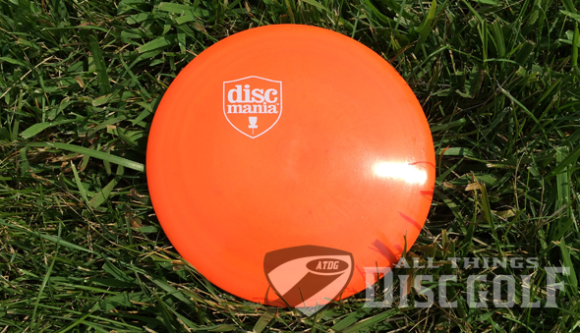 We’ve said it before, but we’ll say it again. Controllable distance is key to having success in disc golf. If you can throw far, but not do it accurately, you’re not helping yourself. The need to keep control on your drives is vital. There are many discs can that fit that mold, but each one still stands on their own. One such disc is the Discmania CD (also known as the Craze). The CD is a Speed 10 driver with a very neutral flight which allows for a lot of creativity from the thrower.

Discmania says this about their first ever driver:

The Discmania CD (Control Driver) is an all purpose driver that has good range and great reliability in most wind conditions. It can be thrown to fly straight, for a soft hyzer or a long turnover shot. It’s a great disc for beginner to amateur players looking to get more speed and distance out of their throws with consistent forward carry and less fade to keep them in the middle of the fairways.

Discmania sent us a pair of S-Line CDs to review. One came in at 175g and one at 167g. Both discs were more stable than we expected, but still carry a lot of control. If you’ve thrown the first run S-Line CDs, you might remember them being a little on the understable side. The CDs we tested, the ones with the small Discmania stamp (for sale at the Discmania Store), were much more stable than those first runs. The two discs also had a small pop top dome to them as well.

Like many of the Speed 10 drivers from Discmania, the rim feels comfortable and as we’ve stated before, shouldn’t be intimidating to disc golfers of any level. The CD will come out of the hand clean and instantly kick into it’s desired flight. There isn’t anything mind blowing, but for a disc with this type of control, you don’t want anything unexpected.

As we stated earlier, the CD we had was a touch more stable than we were expecting. While Discmania gives the CD ratings of 10, 5, -1, 2, we didn’t experience quite that amount of turn. In fact, the 175g CD was quite stable at high speeds. We saw very little turn out of the heavier CD. Even the strongest arms weren’t getting a lot of turn at all. The lighter CD had a little more turn, but even then we wouldn’t rate it at -1. Even when facing a small headwind the CD held up quite nicely.

Don’t think the CD is very overstable though. It just really wanted to resist turn. If we forced it into a little anhyzer, it would hold the line easily. Some of our favorite throws with the CD came when we gave it some added anhyzer and a little added height. It would easily hold that angle before slightly fading out at the end. This is a very useful shot to have on the wider open holes or even those wooded shots where you need a very controlled anhyzer.

At the end of the flight the CD won’t do anything too dramatic. It has a touch of fade, but it won’t jump away from you. When you have a headwind, the CD’s fade is strong enough to keep it moving forward and it will just finish slightly to the left. This is the other part of the flight that helps it maintain the controllable flight. We never once had to worry about a big skip or having the CD finish too far off our intended flight. Once you learn the pattern of the CD, you can start to figure out the exact line you need to start the CD on in order to finish right at your target.

Overall, we’d rate the Discmania CD at 10, 4.5, 0 to -0.5, 1.5 to 2. It didn’t have quite the amount of glide that was initially described by Discmania and had less turn. Regardless, the control was still through the roof.

The flight chart from inbounds Disc Golf shows a flight with a touch more turn than we experienced, but a very similar flight. We had the same limited fade during our tests with the CD.

Overall, if a disc is called the CD and the CD stands for “control driver” you would hope that disc’s true flight matches its name. Thankfully, in the case of the CD, it does. You have a lot of control with this disc. It was stable at high speeds for us, but still had just a small fade. If it was a small hyzer shot, little anhzyer, or something we needed to fly nice and straight, the CD could do it. It is faster than a fairway driver, but not as fast (or as long) as a high speed distance driver.

If distance and control is what you’re looking for, the Discmania CD could be worth a look.