You are at:Home»Instruction»Disc Golf in a Vacuum, Part 1: The epiphany

The School of Disc Golf has had the same mission statement since it’s founding in 2010: ‘to provide the  information and resources necessary for organizations and individuals to embrace the sport of disc golf in healthy and meaningful ways,’ and ‘to inform as many people as possible about the numerous benefits of disc golf’. So yes, we’re committed to spreading the word about disc golf and helping players improve. But creation of the School of Disc Golf was really inspired by a philosophy we call Disc Golf in a Vacuum– an approach to the game we believe takes the playing experience to a much more meaningful and enjoyable level.

I’m not a fan of first-person blog posts. They tend to read more like diary entries. But the best way to help readers understand the concept of Disc Golf in a Vacuum, and internalize it if you are so inclined, is to first explain the circumstances and history of its discovery. So here goes.

In October 2009, I played in what would be my last sanctioned PDGA event for more than four years- my one and only USDGC. A month earlier, at age 43, I had suffered what would turn out to be a serious rotator cuff injury, but I stubbornly refused to withdraw. It had long been a goal to participate in the most exclusive event in the sport of disc golf- considered a zenith in terms of competing at the highest level. This was what I had worked for, what I at that time considered the ultimate measuring stick of my game. Missing it was out of the question, even though I knew I wouldn’t come close to playing my best golf. It had to be checked off the list of disc golf achievements that seemed to important at the time.

The basket and line of hay bales that mark the OB line on Hole 17 at the 2009 United States Disc Golf Championship in Rock Hill, SC. Photo by Jack Trageser.

The results were predictably brutal, and I had plenty of time to reflect on my disc golf life during the long plane ride back to California. Besides the aching, throbbing shoulder, the main feeling was one of emptiness. Not based on the poor results so much, because I’ve had a similar feeling after winning tournaments as well- when both the relief and then the rush wears off. More like a sense of something that didn’t quite provide the anticipated level or duration of contentment.

For more than a decade I had worked hard to keep getting better, with performance in competition and player rating (I ironically peaked at 999) being the ultimate barometers. Now, as I stared out the airliner’s little oval window at the topography 30,000 feet below and mused to myself about its suitability for disc golf, something changed. The thirst to compete and gauge my talents against others had finally been quenched.

Fast-forward several months, during which time I hardly touched a disc in an effort to let my arm heal. After the first week without playing a hole of disc golf, it became obvious that my love for the sport had not diminished. I was itching to get back out there. But something was definitely different. 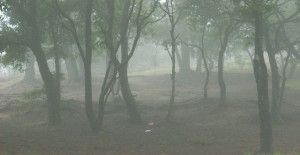 Hole 1 at DeLaveaga veiled by a morning mist. Photo by Jack Trageser.

My first time back on a course after USDGC was early morning on December 31st, New Years Eve. The fog hung low and heavy at DeLaveaga, obscuring all but the immediate surroundings and anyone else who might have been on the course. I was playing alone and as far as I could tell had the whole course to myself.

From the first hole, as I figured out an adjustment that allowed me to throw without too much discomfort, there was this new fascination with the flight of the disc. Maybe because I had decided beforehand to abort the round if the shoulder pain got to be too much, score was barely an afterthought. I simply focused deliberately on what I wanted to do on each shot, visualized the exact flightpath, threw, then spent the walk to the disc reflecting on what went right or wrong and why.

After months without the game I love, I savored each shot like a guy shipwrecked on a deserted island who is picked up by a cruise ship and turned loose on the breakfast buffet. The expectations based on score were gone, replaced by what I can only describe as a detached yet absorbed state of mind.

It went on like that hole after hole. For most of the round my only specific thoughts were relief that I was able to throw without too much pain and a vague sense of excited discovery- not unlike the first time someone took me disc golfing.

Hole 27 at DeLaveaga, with the city of Santa Cruz and the Pacific Ocean in the background. Photo by John Hernlund.

When I arrived at Hole 27 – the final and actually now 29th hole of the course – I sat down on the bench and just took in the sights and smells and sounds. The fog had mostly lifted and I could see the basket 580 feet away and 300 feet below through final wisps of mist. The morning chill was disappearing quickly as well. The only smell was that nondescript ‘fresh air’ smell, and I could now hear the faint rhythmic ringing of someone putting on the practice basket by the parking lot. It sounded like some kind of ceremonial music.

Hole 27 at DeLaveaga Disc Golf Course has for decades been known as ‘Top of the World’. Maybe what happened next was no coincidence, then. It was like one of those mountain-top epiphanies (minus the encounter with the long-bearded wise man who supposedly knows the secret to life).

I had been enjoying the round so deeply because I was getting fulfillment from being fully immersed in each shot, without a single thought about all the extraneous stuff. The golf and game management strategy was there somewhere in the background, on a sort of ‘auto-pilot’ setting in the back of my head, but my conscious mind was absorbed in only the planning and execution of the current throw. It’s not that score didn’t matter . . . but rather it felt like something to be set aside for later observation. And when I had a bad break, like an unlucky roll or a perfect putt inexplicably sliding through the center chains (or a good break for that matter), my reaction was just a “huh.” It wasn’t good or bad. It just was. 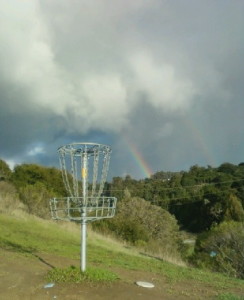 The only two things that did matter were: 1- whether or not the disc flew (or rolled) as I intended; and 2- that I had to take my next throw from wherever it landed, regardless of how it got there. All other value had been stripped away, and what was left was a pure, concentrated form of disc golf experience that I knew I wanted to consciously pursue from that point forward.

As soon as I got home that day, I did my best to write about the experience with the hope that I might achieve the same transcendent state next time I played.

It worked! The philosophy of Disc Golf in a Vacuum was born, and I’ve been personally embracing it ever since. And as I felt it would be criminal to keep the discovery to myself, I’ve shared the concept with anyone who would listen. School of Disc Golf was founded not long after that day as a way to formally commit to this pursuit.

To wrap up this story and provide a lead-in to Part 2 on the subject of Disc Golf in an Vacuum, I’ll briefly share what happened on the drive home that day.

After I had spent some time organizing my thoughts on what would become Disc Golf in a Vacuum, it occurred to me that I had no idea what my score was for the round. I had played by the rules and completed every hole, so I decided to go back through the round in my mind and add it all up. To my amazement, even though I had made no effort to keep track of my score I had a perfect recollection of every throw and had no problem reconstructing it. Even more surprising was the actual score: with most holes on the course set up in their most challenging positions, I shot a -3 with five birdies and only two bogies. Nowhere close to a personal best or anything, but with the months-long layoff and the bum wing I had told myself before starting that anything under +10 would have been fine.

Could it be possible that Disc Golf in a Vacuum leads to lower rounds in addition to all the experiential benefits described above- and in spite of its intentional disregard for score? Stay tuned.