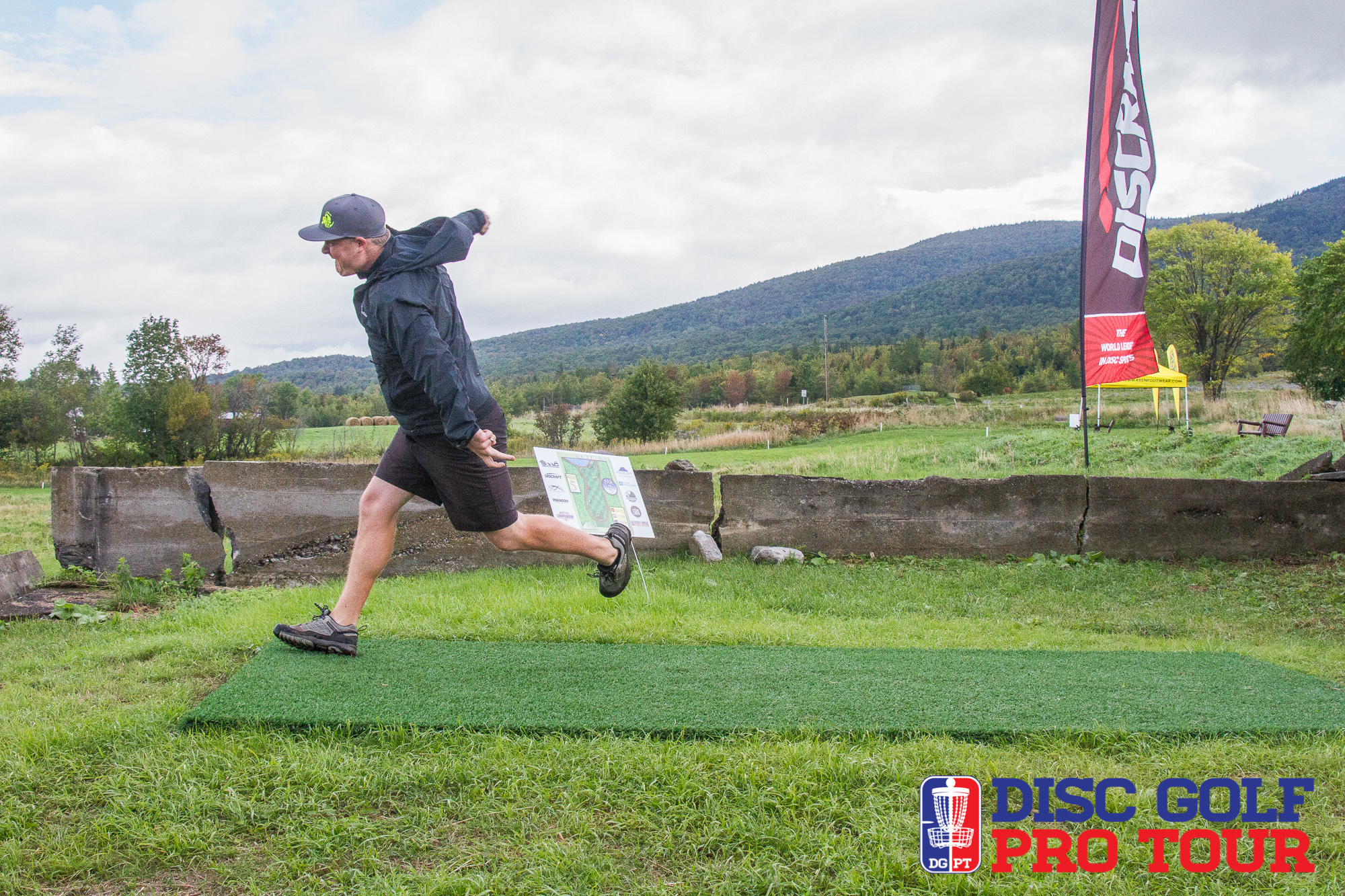 Coming into the Disc Golf Pro Tour’s final event, the Green Mountain Championship, Nate Doss was one of only two on the DGPT to finish in the top 10 in the previous five events. Easily one of the most consistent on the tour, Doss had locked up a bye into the Tour Championship’s semifinals.

Even with the clear path into the Tour Championship, Doss didn’t take the GMC for granted. He was able to grind out a finish in a tie for 9th in the GMC before being rewarded with that bye and a little time off.

In the semifinals on Sunday, Doss got caught behind a red hot Peter McBride and finished just a hair short of making the finals. As he hit the road earlier this week we talked with Doss about the Tour Championship format, the GMC, and the DGPT as a whole.

You knew you had the bye into the Tour Championship virtually locked up. How did you approach the start of the week with the Green Mountain Championship?

“We started off on Thursday at Brewster Ridge, the wooded course, and it felt really good. Came out super solid. Six down through nine holes and the entire group was playing well. We all realized he had to push it the whole time.”

“The GMC is a three round tournament and when it was all said and done I was quite frustrated. My putting drives my success, but struggled at times even though I drove the disc great. I was very rarely in trouble. Only a few penalties at Fox Run. I just missed so many 25 foot putts. That proved too difficult to recover from.”

“That was frustrating, but it was nice to see the driving side come together.”

Let’s move to the Tour Championship. How valuable was the bye into the Semifinals?

“I can’t speak for others, but that bye was really nice for me. There was going to be a lot of disc golf to be played in order to win the Tour Championship. Having a chance to relax was great. It was my first time there to relax after the kids clinic, the beer release, practice rounds, and the tournament, this was my first time to chill.”

“I wanted to come on Sunday and wipe the slate clean and give it my all. The bye helped a ton.”

In the Semifinals, it was winner of the card moves onto the finals. How did you approach it?

“My mindset was on Fox Run. I knew I would play those holes. I had all the shots figured out. I had a little wind, but that didn’t play a big factor. I played with James Conrad and two great young players with Drew Gibson and Peter McBride. I was looking forward to it.”

“We shook hands on the first tee and it was clear we all came prepared to play. The scores proved it. I thought it was a great format and an exciting factor to beat the group and you’re in.”

“The wildcard factor was good too. You never gave up until the end.”

How did the round itself go?

“It was an early morning start and I had the box, but slipped on the first teepad. It was in great shape, but a little moisture caused me to slip and I was able to bounce back.”

“It was a great group. Peter McBride played great, Drew, and Conrad too. For me personally, it was interesting. The way I would explain it was I was consistently inconsistent all week. I’ll work on that going to Winthrop for USDGC. The frustration was there, but made some big shots and made some big putts. I was able to connect a few together and that helped.”

“It was one of those things that Peter McBride was playing great and coming down to the last few holes we knew if he birdied out he would win the card. We didn’t know what it would take for the wild card.”

What are your thoughts on the format of the Tour Championship? Did it meet your expectations?

“I think it did. I might have exceeded them in quite a few ways. I thought the bye was a tricky piece of it. That did reward people. I thought it was cool that down to the finals we had three that came from the quarterfinals on Saturday. That was a great storyline.”

“The integration of the uDisc live scoring allowed fans to really keep track of things. The early return from SmashboxxTV was positive. That was the first Pro Tour with multiple commentators on cards. While I don’t go back and watch it, I know those guys were hustling. They were moving from card to card and followed the storylines. That was cool.”

“It met my expectations for sure. I look forward to seeing this being built on. Maybe more players, a couple days, a standalone event, who knows.”

What about the Pro Tour as a whole?

“I felt like all the TDs, Steve Dodge included, all did a wonderful job at creating some consistency in the Pro Tour. The integration of uDisc was great with the live scoring. The payouts were phenomenal. I’d applaud that up and down the line. They brought some money to the table and allowed us to play for a good amount of cash each weekend.”

“I was thrilled. We’d all admit there are some things that need to change, but that is what happens when you try something new. That will always happen. IF the Tour was 50 years old, you’ll still go out and make things better. I trust Steve Dodge will do that and I look forward to many more seasons on the Pro Tour.”

We can’t thank Doss enough for all our conversations during the Disc Golf Pro Tour. Coordinating a time to chat between practice rounds, players meetings, clinics, and more, can be tough, but Doss always made time to take  look at the DGPT from his view.

While the win on the DGPT evaded Doss this year, every time we talked prior to a tournament he felt he could win it. After a tournament he was always finding that one thing he needed to work on, but walked away with a smile on his face.

You’ll be hard pressed to find a more complete professional than Nate Doss.