You are at:Home»Instruction»Disc golf lingo: many groups even have their own dialect

In a recent round at DeLa, I paused briefly to tell my friend that his last throw had tons of ‘E.V.’, but I held the comment for later when we noticed that a large group of marauders was quickly gaining on us. So naturally we…what’s that? Not exactly following my meaning?

Don’t worry, you’re not behind on the latest disc golf lingo- at least not yet.

Most of those reading this are well acquainted with the fact that while disc golf borrows a great deal of terminology from its stick-and-ball ancestor (par, birdie, drive, putt, etc.), the sport has a lexicon all its own as well. Words like hyzer, anhyzer and thumber, and terms like ‘chain music’ and ‘high tech roller’ mean nothing outside of disc golf (or at least disc sports). And words like ‘chunder’ and ‘shule’ – while they can be found in a standard dictionary – have very different applications in the world where golf meets flying disc.

These words and phrases serve as an instant bond between people who might otherwise have zero in common. Picture, for instance, a 55-year old clean-cut professional type visiting a course he’s never played before during some free time on a business trip. As he arrives at the teepad of a blind hole he encounters a couple long-haired, dreadlocked, hemp-wearing locals. The locals offer to let him play through, and the traveler asks them where the basket is located. One of them replies “If you throw a big anhyzer over those trees on the left and can get it to ‘S’ out at the end, you’ll be putting for birdie.”

Different as they might appear and even be, in respect to the other aspects of their lives, the visitor and the locals understand each other perfectly well on the disc golf course. We’re all members of a subculture that while steadily growing is still far from the mainstream, and our lexicon of unique terminology is one of the true identifying marks about which those not yet part of the clan remain completely ignorant.

But even with subcultures there are smaller micro cultures. For instance, I had played for years before I knew that those in the Midwest (and other regions, for all I know) refer to thick disc golf rough as ‘schule’. Where did that word come from? Who cares?! Shule is cool! (unless you’re stuck in it)

And recognizing that there are regional idiosyncrasies in disc golf is merely the tip of the iceberg. A sport with endless options for creativity and amazement that also happens to still be commercially decentralized is bound to foster new and unique terms in every tiny enclave where it is played. And so it has been- in my circle, anyway (and therefore, I assume, in others). Despite what my mother always tells me, I’m not that special.

I’m hoping that the rest of this post will generate lots of comments as readers write in sharing disc golf terminology unique to their regular group or at least their local course. Here are a few that have become commonplace between myself and a few guys with whom I regularly play.

E.V. stands for Entertainment Value, and we use the acronym to describe a shot that was highly entertaining to watch- whether it was successful or not. A technical spike hyzer from 100 feet out that passes surgically between crowded trees exactly as planned before slamming to the ground right past the basket would have EV value, even if it rolled away afterward.

Marauders are not hoards or barbarians bent on ripping out baskets and melting them down for weapons. Nothing as dramatic as that. They don’t even necessarily appear in large groups, although that is most often the case. Rather, marauders on a disc golf course are those who seemingly have no concept of the written nor unwritten rules of golf. It’s not that they’re rude. They just don’t know the rules or don’t care to play the game that way. They don’t both to take a legal stance (anywhere within five feet seems to be okay- especially if there is a tree or bush in the way), and they don’t take turns to throw. Instead there is a general continuous advancement with discs flying simultaneously and close calls galore. To players who are ahead of them, taking the game more seriously, marauders seem like a swarm of locusts swiftly approaching. Hmmm, locusts. Maybe that’s a good synonym for marauders!

When you’re stuck behind a bush, consider yourself foliated (as in, blocked by foliage). When you’re stuck deep inside a bush, with more bushes and trees all around you, consider yourself extremely foliated. It’s an easy, one-word way to explain to your buddy why you weren’t able to get more than 30 feet out of the rough. “Dude, I was completely foliated.” Note: This term only applies when the foliage is close enough to your lie to make it difficult to even get your throw off cleanly. You can’t claim ‘foliation’ just because there are hundreds of trees and or bushes blocking your line.

As I go through my list here and type out definitions for these words and phrases, it occurs to me that more than one of them are novel terms for classic golf excuses. A good example is fickle factor, or for those who prefer saltier language, fickle f#% factor. My favorite application is when a player has a shot that is wide open and uncomplicated except for a lone twig that appears to be as light and thin as a pipecleaner- and somehow that twig stops his disc dead in its tracks. A more objective view might be that he should have seen that twig and avoided it, but instead he assigns the blame to the ‘fickle factor’.

We also have other ‘factors’, my favorite of which is alternatively referred to as Chutzpah Factor or Scrotal Factor. It is usually referenced in regards to a shot taken that was difficult and might easily have had disastrous results. A more common way of expressing this sentiment would be to say that the shot took ‘big cajones’. Scrotal factor is the scale that determines exact how much cajones the shot required.

Having to reach through several limbs and branches to execute his shot, this player has a legitimate claim to being ‘foliated’. Since the green behind slopes sharply downhill, if he goes for the basket the shot will have a high ‘scrotal factor’. (Photo by Asaf)

Another category not to be overlooked relates to good-natured gamesmanship between frequent competitors. For instance, my friend Alan often likes to put extra pressure on me before putts (and I occasionally return the favor). He uses reverse psychology at select times by asserting that putts inside the 10-meter circle are in the ‘Jack Zone’, meaning they are automatic for me. I assure you, they are not. 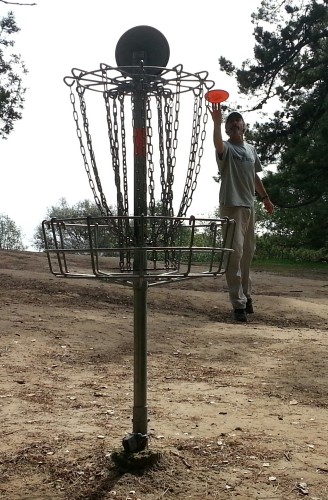 A flip putt is attempted from the edge of the Alan Belt. (Photo by Jack Trageser)

My similar weapon is not reverse psychology but the sadistic reminder of his lifelong struggle with short putts. He deals with this struggle by using a flip putt when close to the basket, but there is always a gray area when he has trouble deciding whether a putt is too long to flip. I sometimes refer to that gray area – usually for him between 15 and 20 feet out, depending on wind direction – as the Alan Belt. If I’m playing doubles against him, I might say to my partner (loud enough for Alan to overhear), “Oooh. That one is right in the Alan Zone.”

Another one to mention quickly is Allenfreude. I won’t go into detail on it here, but it is related to the famous German word schadenfreude. Follow the link to a previous blog post for a description. I’m sure others can relate.

As a reminder, this is the kind of teasing that is appropriate among friends only- and we have an understanding that these types of mind games are only to be used when defeat appears imminent. Don’t try this with the thick-necked guy on your course with a temper and a short fuse.

So my question to you, the reader, is which of these terms do you identify with the most? Better yet, share some of your own, with a description of how and when they are used. Language is a big part of any shared experienced, and few subcultures have a richer lexicon than the disc golf community. Let’s add to it!