You are at:Home»Reviews»Other»Disc Gator looks to make disc retrieval easier 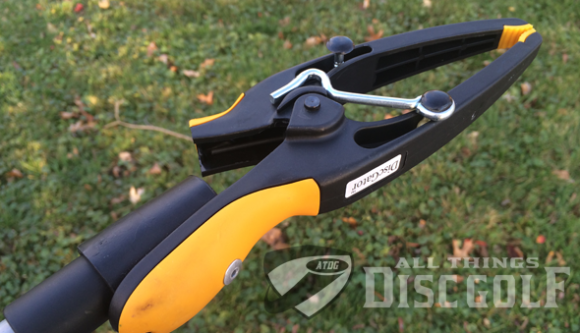 There is nothing worse in disc golf than seeing your disc sitting in the lake or stuck up in a tree just out of reach. You can see it, but you can’t get it back. While there are other products on the market, one company is taking a new approach to disc retrieval. The Disc Gator is in the final stages of development with hopes to become the most versatile disc golf retrieval system.

Disc Gator sent us a prototype to review and we’ve been using it for the last few weeks. The Disc Gator is a very useful tool on the disc golf course. The Disc Gator arrives with a mesh bag that with two clips that can clip onto a bag

The telescoping pole can easily extend to various lengths to ensure you can reach your target, yet remain in control of the pole as it is a little top heavy. When the pole is fully extended and you find yourself needing even more distance you can screw on a second pole to the end to double the amount of space you have to work with.

On the other end of the pole is the section that will actually grab onto the disc. Before you start reaching for the disc, you will set a quick pin that is vertically set between the ends of the pinchers. This holds both ends open. As you reach for the disc you are trying to retrieve, you want to place the disc directly in the middle of the two pinchers. As it reaches the vertical pin, it will knock it back and force the pinchers to grab on to the disc.

The pressure on the disc is quite strong. Strong enough to really grab a hold of the disc without doing any damage. Pull back the pole and and thankfully you’ll find your lost disc on the other end.

We’ve been talking with Chris Silva from Disc Gator for the last few weeks as the final development is in place and wanted to get the story behind the Disc Gator.

All Things Disc Golf: Most products start when someone can’t find a solution for a problem they are facing. How did the Disc Gator get started?

Chris Silva: The Disc Gator got started last October 2013 after sinking my disc in the mud at Maple Hill. I said to myself, “If only I had a really long, grabbing arm.”

All Things Disc Golf: From your view, what makes the Disc Gator better than the other disc retrieval options on the market right now?

Chris Silva: What separates the Gator from the rest is overall versatility and the ease of using it. The Disc Gator can be used to remove discs from trees, water hazards, thorny bushes or just about anywhere. There’s also the ability to join the poles together. This is a great option. After connecting the poles, you can reach 15 feet into water and over 20 feet into the air to remove discs from trees. The difficulty with the Golden Retriever is that conditions have to be just right for it to work. With its attached rope, the Golden Retriever does have a very long range. However, even then, it can only be used in clear water condition with flat bottoms with nothing blocking access to the disc from behind. Suction cup retrieval methods will only stick to the disc if it is clear of debris. For the record, the suction cup method was my first attempt at a retriever. It was soon rejected because if the disc has mud on it, you won’t get a clean stick and the disc stays where it is. 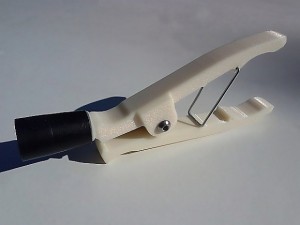 This is the model of the Disc Gator that will go into production. (Photo: Disc Gator)

All Things Disc Golf: Are you guys using 3D printing to produce the Disc Gator? What are the benefits to 3D printing over injection molding or other processes?

Chris Silva: The 3D Printing was only for testing purposes. We wanted to work out all the bugs before going into injection molds. The final mold is being made, and will be done for December.

All Things Disc Golf: You were initially hoping to get the Disc Gator out on the market this December, but you’ve been pushed back a bit, correct? What caused the delay?

Chris Silva: We are striving to have the best quality and functioning product at the lowest possible price right out of the gate. With that in mind, we decided to delay the release of the Disc Gator. Quality drives everything we do. Several redesigns were made to the model for even easier use and a more secure grip. We also wanted to find the very best telescoping pole available. That took a while and then testing it took more time. But we are glad we were patient and our customers will be happy, too. Our shipment of poles will arrive first week of January, that gives us 3 week to get it ready for February 1.

All Things Disc Golf: When do you hope to have the Disc Gator out to the masses?

All Things Disc Golf: What will your projected price point be?

Chris Silva: We have worked extremely hard to get the lowest prices and the highest quality for the Disc Gator. We are happy to say we will be offering the Disc Gator for 29.99. Retrieve only 2 discs, and it pays for itself.

The Disc Gator really excels when trying to retrieve a disc when you don’t have the best angle to get to it. If the disc is above you, it can easily reach it. If it is stuck in the bushes, it can easily reach it. It doesn’t need suction, or even a perfect placement for it to grab a hold. As long as you can get to that trigger in the middle of the pinchers, it will clamp down on the disc with ease.

We can think of countless times of having a disc stuck in trees or wedged in a tight area when the Disc Gator would come in handy. We were impressed by the quality of the prototype and are anxious to see what the final product looks like.

Until they are available in stores, be sure to check out DiscGator.com and follow them on Facebook for the latest news.