You are at:Home»Reviews»Drivers»DGA Torrent Review 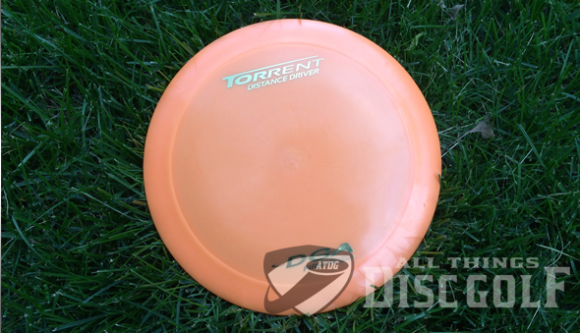 While they don’t release many new discs that often, when DGA does announce a new one, you know they’d put some time and effort into developing it. Earlier this year DGA released the wide rimmed DGA Torrent. DGA is advertising the Torrent as a Speed 14 driver with great control. We picked one up to see what all the hype was about and after our tests, it was worth it.

DGA says this about the new Torrent:

The DGA Torrent Driver is not only fast, but controllable at high-speed. The Torrent driver will add incredible distance to drives while also being as controllable as a mid range disc. The Torrent features a comfortable wide rim that feels great in anyone’s hand and ensures a proper release.

When it comes to any high speed driver, the width of the rim can either make throwing the disc a really great experience or a really bad one. Coming in at 2.4cm, the rim of the Torrent is nearly as large as they can be. An Innova Destroyer is 2.2cm, Discraft Nuke measures at 2.5, and all of the D line of drivers from Prodigy come in at 2.3cm. Because of how the top of the Torrent is shaped, it doesn’t feel quite as large it actually measures. You’ll still need to be good at gripping such a wide rim, but this is one of the most comfortable ones we’ve used.

The Torrent actually has a pretty large shoulder at a pretty decent angle which fits comfortably up against the bottom of your hand. You aren’t gripping a very flat disc which actually helps it feel like you’re in control of it. After this shoulder, it will flatten out and does have a pretty flat top. A better way to describe it might be a flat dome. This dome does allow some nice glide from the Torrent. The dome is needed in order to help it carry out a full flight. While the speed will certainly help it down the fairway, the glide might be the key to the Torrent. Without it, it would almost be a dud in the air.

For us the Torrent was most useful on holes where we had some room to throw. If you have some obstacles to get around, it can likely perform well there too, but with how it wants to turn before a fade at the end, the more room you can give the Torrent the better. When it first comes out of the hand, the Torrent will start to kick into a turn. It isn’t the most understable disc around, but there is a very noticeable turn. Stronger arms will likely get a little added turn, but it won’t instantly roll over and hit the ground. It really just wants to track to the right and hold a steady turn for as long as it can.

Once the Torrent starts to slow down it will begin to flatten back out and actually finish to the left. This really helps it become one of those go-to distance drivers where you can trust that it will break out of a turn and land back in the middle of the fairway. You won’t have to worry about it holding that turn the entire flight and finishing to the left at all. It has just enough fade to make it fly as you would expect.

Typically, massively high speed drivers aren’t the best for newer players or for golfers with slower arm speeds. Even with the wider rim than normal, the Torrest might be a distance driver that could perform for slower arms. While you might not see the large amount of turn that stronger arms will experience, you’ll get a pretty straight flight that should prove controllable. 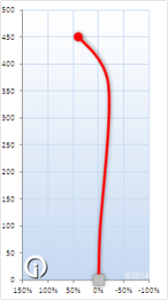 Overall, we’d rate the DGA Torrent at 13-14, 5, -2, 2. We go back and forth on the speed. DGA is giving it a speed 14, but we feel once you get around the Speed 13-14 range, you don’t see a big difference. The Torrent’s great glide and understable flight will give you a very nice natrual s-curve style flight.

The flight chart from inbounds Disc Golf shows the flight pattern close to what we were experiencing. We might have seen a little more turn, but the overall flight was very similar.

The DGA Torrent really shined for us on holes where we could really rip into one. We had no problem trusting the Torrent to kick into a little turn, glide down the fairway with ease before showing just enough fade at the end of the flight.

If you have a tailwind or a wide open shot where you can really let a disc fly, we’re certain the DGA Torrent will be itching to be your disc of choice.