You are at:Home»Reviews»Putters»DGA Steady Review

The man who started it all for disc golf, “Steady” Ed Headrick finally has a putter that reflects his name. DGA has released the new Steady putter that is named after the sport’s founder. With a big bead and a very comfortable profile, the Steady has a flight that is easy to control on nearly every type of shot.

DGA describes their new putter as one reliable disc:

At low speeds this putter will has a hyzer finish and with increased speed it will show a reliable and straight flight path. This beaded putter feels great in the hand and looks equally great resting in the basket. The Steady is available in a unique blend of DGA’s D-Line plastic which helps create the perfect grip and feel for a putter.

DGA sent us a Steady to check out and we were anxious to see if it can live up to its name. Right when we grabbed the disc we could tell we had a disc with a lot of control to it. There is a sizable bead on the bottom of the Steady. It is one mainly sits on the bottom by itself rather than blending into the rim of the disc. If you’re a fan of beaded putters, there is little to dislike. Some might find the bead to be a little too large, but the flight might make up for it.

Along with the bead you’ll get a moderately shallow feel as well. It isn’t the deepest putter we’ve used, but it also isn’t the shallowest. It is closer to the shallow side of the spectrum which made for a very comfortable grip. A fan grip or modified fan grip found themselves right at home on the Steady.

We started out with the Steady on the tee and worked our way into inside the circle. The Steady can really hold up to some power. There is plenty of high speed stability out of the box and it gave us a lot of confidence on drives. Once the Steady beats in a bit we expect to see a little bit of turn, but even then, it likely won’t be too much. If you like a putter with a lot of stability off the tee, the Steady checks that box for you.

As it continued to fly down the fairway, the Steady will show a very predictable finish. It isn’t going to cut in that hard, but it will fade on a consistent basis. It was enough to get it to tuck in behind some trees or fade out before heading out of bounds. Any drive where you’re needing a short controlled shot with a decent finish is a drive the Steady can handle. If you need a little stronger of a fade, give it a little hyzer and that should do the trick.

There is a decent amount of glide to the Steady which helps it be a nice driving putter. It has enough to help keep it going down the fairway, but once it starts to slow down, it will want to drop slowly. The Steady has found a sweet spot for glide. We never felt like we wanted more and at the same time we never felt like we wish it had less.

As an approach disc the Steady will be a nice stable-to-overstable putter. The high speed stability is certainly there which will help with control you have. By taking just a little bit of power off of the Steady, you can really produce some nice sweeping hyzer approaches. By adjusting the height and hyzer angle you release it at, the Steady can really be controlled right up to the basket. We were able to duck around some small trees or just allow it to naturally fade toward the basket with ease. It isn’t a disc you’d aim right at the basket with, but more of one you’d use a little finesse to get in there.

If you give the Steady a little bit of anhyzer on a shot, but keep it on a moderately low line, you’ll see it slowly flex back out to flat before a small fade. On bigger anhyzer shots it will mainly hold the initial angle and flex back to a flatter angle before hitting the ground. It likely won’t come all the way out of it, but you can trust it will maintain that line for the majority of the flight. Probably not the best anhyzer disc available, but it was never designed to be that. Stick to hyzers and straight shots with the Steady and you’ll be a happy camper.

Inside the circle the Steady will continue to show a nice high speed stability which allows you to either play the small fade or go right at the basket with confidence. For a pitch putter, the fade is certainly there and with just a little hyzer, you can watch the Steady glide toward the basket and fade into the chains. Spin putters will also be able to just go right at the heart of the basket with confidence. The somewhat soft D-Line plastic gives a nice amount of grip and just a little give to give you the control you desire inside the circle. 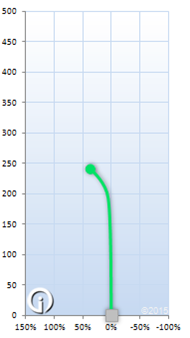 Overall, we’d rate the DGA Steady with at 2, 3.5, 0, 2. The numbers are the same for what DGA rates it at except for glide which we bumped up from 3 to 3.5. You’ll see virtually no turn and a nice fade from the Steady.

The flight chart from inbounds Disc Golf shows a flight very close to what we saw on the course. A very straight flight until it starts to power down into its fade.

Does the DGA Steady live up to its namesake? We think it does. This is the type of putter that can easily become your go-to on every single hole. From confidence inside the circle to solid drives off the tee on shorter holes the Steady can do it. Would Ed Headrick be happy with the Steady? We think we would’ve loved it.

Win your own DGA Steady

DGA sent us two extra Steady putters to giveaway to our readers! We’ll give one away on Facebook and one away on Twitter! As always, there are two ways to enter:

The new DGA Steady putter by @disc_golf lives up to its namesake! Win one from @ATDiscGolf! http://is.gd/ATDG_Steady #DiscGolf

We’ll take entries through Friday, June 26 and will announce winners on Saturday, June 27 on our Facebook page! Thanks to DGA for the extra discs!