You are at:Home»Reviews»Drivers»DGA Sail Review

In a world filled with distance drivers that require a lot of power to gain distance, there is something to be said about a disc that can fly quite far without much effort. The DGA Sail is a very understable driver with an extreme amount of glide which can be a deadly combination if used correctly for any skill level.

DGA says this about their new driver:

The Sail is a controllable distance driver that has understable characteristics and is great for all levels of play. Those with slower arm speeds will quickly make this their go-to distance driver, while players with faster arm speeds will have fun launching this disc into huge anhyzers and turn over shots. The Sail produces effortless glide, allowing players greater distance and control. Looking for a disc to get max distance in tough wooded situations that require touch and finesse? The Sail will prevail.

DGA sent us a Sail in their ProLine plastic for this review. As with any review we do, we had a variety of skill levels try the Sail to see how it performed for an entire spectrum of disc golfers.

With such an understable flight, this disc will naturally appeal to beginners and those with a slower arm speed. That doesn’t mean that stronger arms can’t find value in the Sail. In fact, across the board, many positive reviews were heard.

Right off the bat, you’ll notice a pretty domey disc. The rim size isn’t wide enough to turn people off and hits a nice sweet spot in terms of speed. The dome is pretty consistent from side to side and really helps with the overall glide of the Sail. We’ll touch on this in a moment, but glide is one of the Sail’s defining characteristics.

Starting on the slower arm speed side of things, or if stronger arms back off the power a bit, we saw shots with very nice distance compared to the power put behind the disc. For those who can only reach about 275-300 feet with max power, you should be able to lean into the Sail with a full power throw and get a very nice s-curve style shot. You have to expect some turn to be there and your arm speed will determine just how much you get and it is very possible that amount is slim. The s-curve shots were common, but some were very tight s-curves. The turn was almost on the -1 range, if that, at times while others saw -2 or -3.

We even saw some slower arm speeds give it a little bit of a hyzer angle on release and it would flip up flat, turn a hair, glide down the fairway, before a very soft fade at the end. It all depends on the amount of power you’re putting behind the Sail. It takes a little adjustment, but you can soon dial it in.

When stronger arms took over the Sail, they started with nearly standstill shots or those with a very slow walk up. We’d see those who could reach 350 feet or more on normal throws give the Sail a test at about 50% arm speed and the results were similar to what slower arms were seeing when they would throw it at full power. A little adjustment of release angle was needed, but the results were impressive for what little power was actually being used.

With a little hyzer, a slow arm speed, and a little snap at the very end to get it moving, the Sail would flip up flat before a little turn midway through the flight. This is where the glide really took over and would hold it up in the air and allow for that full flight to be carried out. Some were seeing distances of 325-350 feet with anywhere between 50-75% power mainly due to the glide. The understable flight is controllable, but it takes some added adjustments from you to make that happen.

It would be easy to think that if you can reach 350 feet without putting your complete arm strength into a throw, then max power must produce even greater results. While we’d love to say that is true, in reality, the understable nature of the Sail starts to take over at certain speeds. The strongest arms we saw test the Sail would get a near effortless turnover shot with great distance on top of it.

When thrown at full power, the Sail would correct any hyzer angle that was on it and kick into a big turn. Now, with the glide under it, it wouldn’t turn into a roller right away, but it would continue to hold that angle and show some major movement from left to right. At least 30-40 feet right of center is where we were seeing the Sail land. With some added height we could start it left of center and continue to get 30-40 feet beyond the general center line. It all comes down to controlling that release angle and your initial aiming point. Regardless though, the glide really takes over here. Other discs that carry a large understable flight, might start to drop out earlier than expected or turn into roller since the turn overpowers the glide. That wasn’t seen with the Sail. Air shots is where we saw the majority of throws.

Rollers are of course possible with the Sail and it doesn’t take much to help it over. If you turn on it a little yourself as you begin the throw, you can help it get to the ground quicker.

Regardless of the arm strength, the Sail does have just a hint of fade at the end. Even on the strongest throws that had a large amount of turn, at the every end of the flight it would break out of the turn before a soft fade. It wasn’t much, but it was certainly there.

Overall, we’d agree with DGA and rate the DGA Sail at 11, 5, -5, 1. The glide and turn are the two characteristics that define the Sail. The glide helps your throws get some added distance while the turn will bring effortless throws to slower arms and a lot of control to stronger arms. 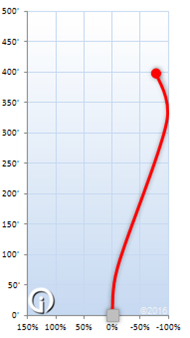 The flight chart from inbounds Disc Golf illustrates a flight close to what the strongest arms were seeing. The turn is certainly there and the glide helps carry out some distance before just a soft fade.

The DGA Sail can certainly provide some great distance with little effort. It takes a combination of release angle to power to provide a straighter flight, but once you dial it in, you can lean on the glide and let the Sail do the work. Slower arms were able to accurately place the Sail toward the center of the fairway with distances greater than what they were used to. The strongest arms loved the big turnover shots, but also found pleasure in taking some power off of it and getting near effortless results.

DGA sent us four extra Sails to give away! We’ll have three ways to enter for the two discs:

Check out the effortless distance with the @disc_golf Sail! Enter to win one from @ATDiscGolf http://is.gd/ATDG_Sail #DiscGolf

Comments are moderated and will be approved on a regular basis. Don’t worry if you don’t see yours right away. We’ll take entries through Sunday, April 24 at 11:59 p.m. Central Time. Winners will be contacted on Monday. We’ll randomly select two winners from the comments on the site and another winner from Facebook and one from Twitter.

Thanks to DGA for giving us the chance to review the Sail and the extras to pass along to our readers.