You are at:Home»Reviews»Drivers»DGA Pipeline Review

The idea of a fairway driver is not uncommon to disc golf. Most fairway drivers through tend to land in the Speed 6-7 range. One trend we’ve seen over the last year or so is the development of a range of discs that aren’t quite high speed drivers, but also outstretch a typical fairway driver. The DGA Pipeline is one of those discs and it brings a flight that is easy to fall in love with.

DGA has said in their initial comments they feel confident in their new disc:

The Pipeline will hold any line you commit to. Give it a slight hyzer release and watch the predictable left finish. Turn it over and watch it take a controlled right turn. Throw it straight down the pipe and watch this disc truly shine. Throwers will trust the flight of the Pipeline within the first round of use.

DGA sent us a Pipeline for this review and we’ve put it to the test in various conditions on the course.

With our first throws, a unique combination of flight characteristics stood out. We instantly felt a little more speed in the throw. The Pipeline got up to speed quickly and with little effort. Then, we saw the very controllable flight. It held lines and gave us confidence in each and every throw. Finally, we saw very consistent results that even gave faster discs a run for their money.

Let’s first start with the speed. Like we said before, it is faster than your typical fairway driver. It is no where near a Speed 13 driver, or even a Speed 10 for that matter. You shouldn’t feel intimidated by this Pipeline at all. Nearly every skill level in our testing group could get the Pipeline up to speed. A disc like this shouldn’t be hard to throw and the Pipeline isn’t. The rim size is very manageable and the disc itself shows its true colors once up to speed.

Those who typically throw a lot of fairway drivers did like the added distance they were able to get without sacrificing other aspects of the flight. We heard comments about how they like a faster disc, but can’t keep them as straight, or they are too understable and don’t fade as much as they’d like. The Pipeline had just the right mix for many in the group.

Secondly, the flight itself is actually quite boring… in a good way. For all intents and purposes, it is easy to give the Pipeline a Turn rating of 0. It isn’t the most high speed stable disc we’ve thrown, but it really has no desire in most conditions to show any turn. Into a decent headwind we saw a little movement and the strongest arms could get a little turn, but it would float a little from left to right instead of showing major movement.

If thrown straight, it will just go straight. The disc remains flat, glides forward, and softly fades. It is nearly a point-and-shoot type disc. The fade is there, which you need to account for, but you can figure it out quickly to help shape your shot.

On a few hyzer shots the Pipeline would hold that angle for nearly the entire flight from start to finish. If you ever find yourself calling for a slight sweeping hyzer shot, the Pipeline could pull it out. It won’t have a very dramatic finish, but you can expect a finish to the left each and every time.

What surprised us the most was when we used the Pipeline on anhyzer shots. On tight anhyzer shots the Pipeline would hold the angle for most of the flight before moving back to a flat angle and transitioning into a soft fade. These were great little s-curve type shots that helped us hit some tight lines. We then gave it some more room to fly and gave it a bigger anhyzer angle. This produced even more left to right movement that would continue to hold that line and not break out as early. The fade would come, but it would be so late in the flight, it wouldn’t do much.

The final part we wanted to highlight was the idea of throwing “too much disc” on the course. If you’re throwing Speed 10-13 discs and the results are inconsistent, it might be too much disc to handle. In our testing group we were seeing distances closer to discs faster than the Pipeline and with more accuracy. With the combination of a little more speed and above average glide, we saw many throws with great control, but were up to the speed the disc itself craves. If you can reach that threshold, the results will come. 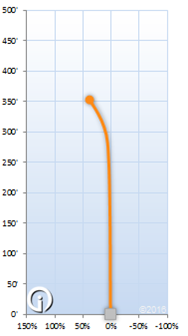 The flight chart from inbounds Disc Golf shows a flight nearly identical to what we saw. Nice and straight to get things started before a soft fade. Note the distances though. Longer than normal for most fairway drivers.

With all of that said, the easiest way to describe the DGA Pipeline is this: a slightly faster Innova Teebird. The Teebird tends to be the benchmark for most fairway drivers. We’ve called the Innova Thunderbird or other discs a “longer Teebird” — which is still true. The Pipeline slots right in between those. A little easier to control than a Thunderbird, due to the slower speed, and a little longer than a Teebird, due to well.. the faster speed. The fade won’t do anything to destroy a good throw and the turn early in the flight will allow you to maintain your lines.

These “slightly faster” fairway drivers are hard to dislike. A little added distance with a similar effort and you still maintain control? That is the DGA Pipeline.