You are at:Home»Reviews»Drivers»DGA Hellfire Review

Every now and again we come across a disc that gives us something we’ve never seen before. The DGA Hellfire is one of those discs. Yes, we’ve thrown many overstable drivers, but the Hellfire has a unique flight. With a flat top and wide rim the Hellfire means business.

DGA says this about their beefy driver:

Tested by power throwers, this disc maintains a consistent hyzer line and will not turn over making it a reliable choice in windy conditions. Backhand throwers will love the Hellfire’s predictable hyzer lines. Sidearm throwers will trust its stability and will be able to throw accurate flex shots. The Hellfire is a great utility disc, perfect for rollers and overhand shots. It features a true flat top and feels great in your hand.

DGA sent us a Hellfire to review and it was certainly a testing session that had us scratching our heads. Typically when we review a disc we like to avoid other news and notes on it including the flight ratings. We want to try and figure out the flight without any influence. We knew the Hellfire was going to be overstable, but we didn’t expect the lack of glide. Once we got used to it, you can really make the Hellfire perform for you on the course.

As we stated at the start, the Hellfire has a very flat top which gives it a really small profile. The width of the rim (2.2 cm) is on the wider side of things, but still feels very comfortable. It actually feels smaller than it really is which helped us gain some control and confidence on our throws. The Hellfire is beadless, but the bottom of the rim does have a little curl to it at the very end which almost gives it the feel of a small bead.

With our first few throws we instantly saw a flight that was very stable at high speeds. There was no sign of any turn which was the expected behavior. On big hyzer shots it would certainly hold the release angle and ride that for the entire flight. If we gave it some anhyzer and gave it some room to fly, the Hellfire would flex back out of it pretty quickly. Just like any overstable driver, you want that high speed stability. You need to have trust in the disc and you can put quite a bit of it into the Hellfire.

Before we talk about the fade, we need to talk about the glide. We were expecting a little glide like some other overstable drivers, but nothing that would exceed a 3-4 rating. In the end, the Hellfire barely knows what glide is. We found ourselves on a few holes that shaped up nicely for a disc like the Hellfire. You need that hyzer finish and you have plenty of room to the right of the basket to start your throw before allowing it to fade back in. We would start the Hellfire on that planned path and watch it drop pretty quickly before hitting the ground and skipping over.

The flight was actually shorter than what we were expecting to see. Sure, it had no turn and the fade was there, but it just ended so quickly. We retooled our thinking and gave it a little more height and even a little anhyzer to produce a very tight s-curve. It loved the added height and used the s-curve flight to carry a little added distance. It still had the strong finish at the end, but just a little deeper.

We also found ourselves at a few shots where we needed the distance of a speed 7-9 driver, but also needed a strong finish to kick it to the left. We gave the Hellfire a look on these holes with sweeping hyzer shot with some added height. One where you really keep it on a hyzer line, but throw it at a steep angle to it around a tree or another obstacle. Due to the lack of glide, you could really start to place the Hellfire where you want it. You have to account for the fade, but as with any disc, if you need it to go a little shorter, throw it a little higher with some hyzer and let the disc do the work. The Hellfire really didn’t want to carry too far and crashed down hard for us close to the basket.

The Hellfire’s fade is certainly strong and it will appear to show up later than expected. Part of that is due to the lack of glide and it needs more time in the air to carry out a full flight. You can take advantage of this kind of flight by using it to produce some powerful skip shots or some late fades on tight holes. The Hellfire could become very useful on tightly wooded holes where you need a big finish to the left. You can control it with a little anhyzer to begin with and then let the disc do the work at the end. 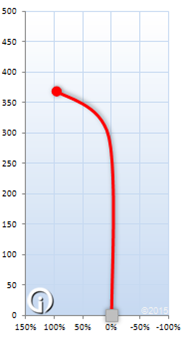 DGA rates the Hellfire at 10, 1, 0, 5. We’d have to agree with those ratings, but might put the fade rating at around a 4. With the lack of glide, it is tough to tell just how strong the fade is. It certainly breaks into the 4 rating and could touch the 5 mark, but can be a little tough to judge. Regardless, the fade is strong.

The flight chart from inbounds Disc Golf shows something close to what we were seeing. We weren’t quite able to get those distances with the Hellfire, but the overstable flight was certainly there.

The DGA Hellfire is in the family of overstable drivers, but it does stand on its own. It lacks the glide that a Firebird, Predator, or Force might have. It is faster than a Firebird or Predator and is just as overstable if not slightly more.

We often talk about the utility type disc and those tend to be on the slower side of the spectrum. The Drones, Gators, Vipers, or Justices of the world, for example. This is one of the fastest utility discs available. You can really master the flight and get it to hit some tough lines with confidence. The Hellfire is no joke. It is here to play and does it with some strength.